Kakoda villagelocated in Jalgaon district was under the tight grip of a number of problems such as water scarcity, absence of hygiene, unemployment, illiteracy and addiction. However, a school teacher, on the basis of his strong will power, transformed the entire face of this village. By establishing Gram Vikas Mandal, Bhalchandra Dinkar Kulkarni has made the lotus of development bloom in this mud. Today, the village is regarded as the paradigm of brotherhood. All the villagers who earlier used to quarrel over petty issues have now realized the importance of village development and work together in harmony. The consistent efforts by Kulkarni has imparted them a new vision towards life.

Kakoda village is located at a distance of 35 km from Muktainagar taluka in Jalgaon district of Maharashtra. As the farmers here used to practice traditional farming solely dependent upon rainfall, they used to sit idle for about half an year without any source of employment. Hence the farmers were totally overburdened by the debt. The percentage of addiction was also higher. Personal quarrels did not let them pay attention towards village development. Hence the village atmosphere became unhygienic. Water scarcity was also a big issue. People have to go several miles in search of drinking water. Just 2-3 villagers had electricity connection at their homes. Kulkarni realized that if all these problems are to be completely overcome, education is the only way out.

The atmosphere in the village was not suitable for students to concentrate on studies. Kulkarni started abhyasika for youths and thus the students started concentrating on studies. Those who excelled with flying colors were felicitated for encouragement. This triggered the passion among other fellow students to study with doubled enthusiasm. A number of students who have studied at this abhyasika are now doing a good job in various fields.

This noble work was initiated in the year 1977. The abhyasika that was started with an initial strength of just five students has now widened its sphere in such a way that four full-time karyakartas are now looking after its entire work. Needy students from class I to XII are given textbooks by the sanstha. A library has also been opened in order to inculcate reading habit among children.
The hygienic condition of the village was quite poor. Filth was scattered everywhere, drainages were open, roads were in poor condition and due to absence of lavatories, villagers used to defecate in the open. Hence it was necessary to make villagers realize the importance of hygiene. Hence karyakartas themselves took broom in their hand and started cleaning up the village. Meetings of the villagers were conducted and hygiene awareness was created. Gutter lines were constructed for waste management. Lavatories were built in the village houses. As the village was small in size, there was no health centre. Hence Arogya Peti Yojana was initiated.

The sanstha always endeavours to work equally at all the social levels. In order to ensure stability for nomadic tribes, a small colony was arranged for them in the village itself. Small houses were built for them and bore well was also constructed for ensuring water availability. Children were enrolled in the Ashramshala and hostel accommodation was also provided. Thus the doors of education were opened for the underprivileged.
The sanstha believes that all people should be united and work hand in hand for village development. With this view of social integration, every year Durgotsav is celebrated with religious fervor.
Mass sapling plantation drive is conducted for maintaining ecological balance. Rainwater harvesting has been widely undertaken. Now the water table has been raised and sufficient water is available in summer. Farm ponds have also been constructed in order to ensure optimum irrigation round-the-year. River water is also utilized by constructing embankments.

A self-help group has been constituted for empowering the women folk. A papad manufacturing unit was started where the village women assemble for papad-making after finishing their household work.
In order to provide employment to village youths, two of them were selected and given sheep for starting rearing business. Loans were given for various businesses such as grocery, salon, dairy, etc. In order to acquaint farmers with latest modern mechanized farming techniques, farmers’ meet is organized in the village every year.
Various de-addiction projects began to be implemented in the village. A Bhagwat Samiti of local villagers was formed and the masses were awakened regarding the harmful effects of addiction through bhajan and keertan programmes. Because of this, the addiction among the villagers has drastically reduced. Such kind of awareness drives are also being carried out in the surrounding regions. The musical instruments for bhajan programmes are made available by the mandal itself.
A temple of Lord Hanuman has been built that has maintained a spiritual atmosphere in the village. Thus, today, the village has become self-reliant due to the Herculean efforts of the mandal.

Sat Jul 7 , 2012
Thiruvanantapuram July 7:  Janam TV,  a unique style of  TV channel will be part of the fight against social injustice and corruption prevailing in the India. From unbiased and uncensored news to educationally, professionally and socially oriented programmes, from politics to business; from entertainment to amusement; from traditional beliefs and their […] 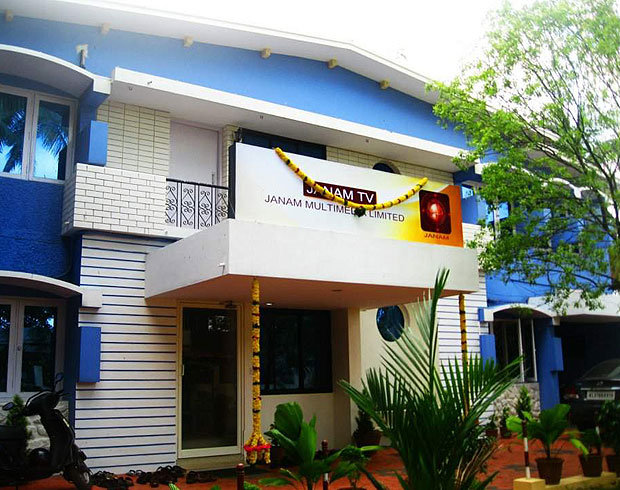