BHELUPUR (BUXAR): It was an emotional ‘pilgrimage’ for Trinidad and Tobago prime minister Kamla Persad-Bissessar to her ancestral village Bhelupur. She tried to fight back her tears but failed. As tears rolled down her cheeks, the ‘granddaughter of the soil’ entered her ancestral home and hugged women relatives in this remote and dusty village on Wednesday afternoon.

Looking resplendent in a red sari with floral borders and a matching colour flower tucked in hairs, Kamla, 60, seemed to face no language bar as she made a forceful speech in English, starting with ‘Bhaiyon aur bahno, Pranam’ and told the people how she traced her roots to this village. “Your granddaughter has come here. I can see one hundred thousand people here to greet me. I say ‘dhanyavad’ for this love and hospitality,” she said.

The visiting VIP’s great grandfather Ram Lakhan Mishra from this village had set out for the Caribbean islands in 1889 as Girmitia labourer. He had boarded Volga ship from the then Calcutta on October 21, 1889.

“Whatever I am today is because Bihar is in my DNA and whatever my ancestors taught me,” she said as villagers from Bhelupur and surrounding villages cheered her lustily.

Earlier, she and her entourage reached here in two IAF choppers. She straightaway went to the house of her uncle Jagdish Mishra on foot and spent a good 40 minutes there meeting women and children. The relatives presented her with a silk sari and ornaments besides serving local dishes and sweets.

Accompanied by husband Gregory Bissessar and other relatives who came from Port of Spain, she was overwhelmed by the people’s response. The narrow lane on which she walked was laid with bricks and covered with green carpet.

Referring to the background under which her forefathers migrated to a far-off place, she said they were not educated people but they had vision for better life. “When they went, they had no gold, no diamond, no traveller cheque and they had no facility of cell phone, Internet, Blackberry and Facebook. What they took with them was Ramayan, Gita and Koran and the lifestyle, tradition, values from this land,” she said as audience clapped and cheered.

Kamla had a message for the villagers. “Education is the only way to get rid of poverty. … Get your daughters educated. For future generations, do what my ancestors did: give education to children.”

The Trinidad & Tobago PM and her entourage stayed at the village for about 100 minutes. As she rounded off her visit and proceeded to the chopper, the crowd went out of control and broke all the barricades.

On behalf of the state government, art and culture minister Sukhda Pandey, who is also local MLA, welcomed her.

Wed Jan 11 , 2012
Bangalore January 11: Spiritual and religious leaders from across the State have came forward to join hands to support anti-alcohol drive of the Karnataka State Temperance Board (KSTB). A two-day round table conference has began in Bangalore today in association with Gandhi Smaraka Nidhi, National Service Scheme and Karnataka State […] 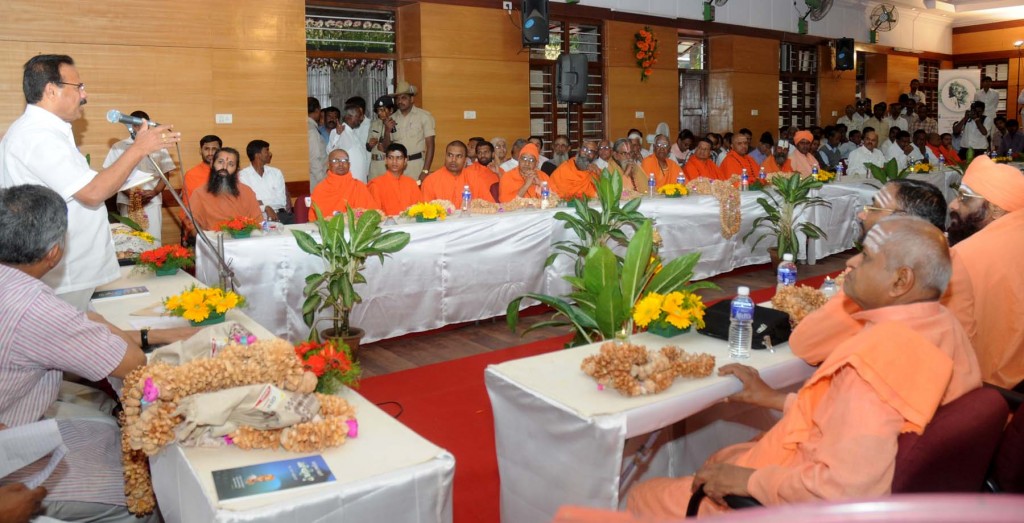