(Few prominent condolence message are given below)

Dr. Vijay Bhatkar (Senior Scientist, President of Vijnan Bharati & former head of C-Dac) : We met many times, as he was an engineer himself & was keenly interested in developing Swadeshi technology. He was most concerned about the problems faced by the country, basically in the field of agriculture. He wanted the youth of the country to be active in the field of technology innovation & paid keen attention whenever someone presented new ideas before him. He was interested in how we can supplement the latest technology to the ancient Indian knowledge to solve the problems faced by the country. He wanted India to be a world leader in Science & technology front. Tributes to him.

RL Francis, President of PCLM: Christian organistion ‘Poor Christian Liberation Movement’ (PCLM) has expressed its profound grief and sorrow on the sad demise of former Sarsanghachalak of Rashtriya Swayamsevak Sangh (RSS) K S Sudarshan. “Sudarshan ji was a great nationalist person. He always advocated for social justice. He was a man of wide-ranging qualities,” said RL Francis, President of PCLM, while paying his homage on the sad departure of former RSS chief. “Sudarshan ji was a strong supporter of maintaining peace and harmony among all religions. From ‘Catholic Bishops Conference of India’ (CBCI) to the representatives of protestant Churches, to maintain peace between Hindus and Christians he always maintained a dialogue between these two groups. The sad demise of Sudarshan ji has created a huge vacuum in the field of social harmony,” added Francis.

Nitin Gadkari :  The BJP President Shri Nitin Gadkari has expressed his profound grief and deep sorrow on the demise of Shri K. S. Sudarshan, a former Sarsanghachalak of the Rashtriya Swayamsevak Sangh (RSS).

In a condolence message, the BJP President said Shri Sudarshan was a great thinker and a staunch nationalist who dedicated his entire life in the service of the nation and made remarkable contribution in promoting and expanding the RSS as a Pracharak in various capacities and in different parts of the country and later as the Sarsanghachalak from 2000-2009.

A strong votary of Swadeshi, Bio-fuel and alternative sources of energy, Shri Sudarshan had a vision for the progress of the country and emancipation of the down-trodden without emulating the western economic models.

Shri Sudarshan’s death has left a void in the top echelons of the RSS which will be difficult to fill. His departure marks the end of an era in the Sangh.

Dr. Pravin Togadiya : Pranaam & Tribute to Param Poojaneey Sar Sanghchaalak Maa. Shri Sudarshanji. A brilliant scientist, he thought ahead of his times. We will miss him.

Sri Baij Nath Rai, (General secretary ,Bhartiya Majdoor Sangh) : Bharatiya Mazdoor Sangh (BMS) expresses its deep shock and grief over the sad demise of Sri K S Sudarshanji, former SarSanghacahalak of RSS who was a friend, philosopher and guide to BMS . Sri Sudarshanji was a multi-dimensional personality with great intellectual capacities. He had deeply studied various civilizations, religions & philosophies of world. Besides this, Sri Sudarshanji has command over Economic policies which have come to light in his speeches. At the same time, he had also an intense study on Marxism and had an exposure to various scientific inventions. He was an ardent follower of Swadeshi and practiced the Swadeshi way of life till his last breadth.

Sri Sudarshanji strived a lot to bridge the gulf between the Indian Muslims and Christians with the Hindu society. He had personally attended and interacted with many scholars with same purpose. He was the main speaker at the Sarva Pantha Samadar Manch of BMS, which works for the Inter religious harmony among the working community and inspired thousands of workers. He addressed the working community several times and imbibed patriotic feelings among them.  BMS pays its tributes and expresses its deep condolences.

Narendra Modi : Sad to know about demise of Sudarshanji. He was blessed with a sharp mind, humourous nature & always known for his simple & disciplined life.

Tarun Vijay : Pujya Sudarshan ji, former RSS Sarsanghchalak, a crusader for water conservation, bio fuel and hindi , no more.He created new offbeat paths. He didnt hesitate to meet Mulayam Singh, Shiela Dixit, and everyone who could help him in his mission to conserve water and encourage Hindi. He was a great scholar of Hindu heritage, scriptures and studied Islam deeply.

Subramanian Swamy : Sad to hear while in Gujarat tour that fmr RSS Chief Sudarshan passed away. He was really very good man and of great learning.

Arun Jaitley : Pujya Sudarshan ji, a crusader for water conservation, bio fuel and hindi, no more. Fortunate to have lot of affection & guidance from him.

Prof. Rakesh Sinha : He had unlimited hours and energy to spend with intelligentsia. the inspiring words always encouraged people like us. When leftists unleashed a campaign against RSS’ role in the freedom movement , i wrote an article in The Hindustan Times. Then Sh Amulya Ganguli was edit page incharge. My article was based on archival sources, replete of facts. He published it as a main article with a caption “Not a Negative Role”. (http://hvk.org/archive/1997/0997/0039.html ) Sudarshan ji was first to call me early in the morning, went Jhandewala to meet him. I complained the caption was not appropriate. He responded “since Communists played negative role, therefore communist mind used for us ‘Not a negative role’”.

Indresh Kumar (Senior RSS functionary & Advisor to Muslim Rashtriya Manch) : Pujaneey Sudarshan ji was simple hearted, straight forward person. He was not only a supporter of Tibet’s independence struggle, but was actively involved in organizing the support to the struggle. Tibet’s Government in Exile felicitated him for his efforts.

His most favorite idea was to Indianise Islam & Christain faiths. To achieve the goal, he even initiated dialogues with the leaders of the Christian & Muslim communities & achieved remarkable success. He tried to bring down the level of hatred among these communities.

Ravishankar Prasad: The former RSS chief had worked hard to expand the Sangh’s base and spread its ideology. 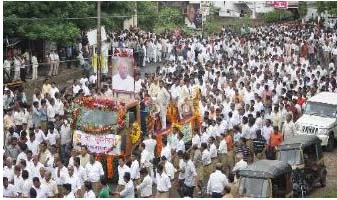