New Delhi March 10: Vishwa Hindu Parishad (VHP) and Bajrang Dal on Friday held a protest in the national Capital against attacks on Hindus in Jammu & Kashmir. They also burnt effigy of Governor NN Vohra. VHP and Bajrang Dal said that the protest was held against recent attacks on Hindus in Rajauri, booking them in false cases. They also raised questions on the manner in which the time duration of the Amarnath Yatra has been cut down. VHP alleged that the J&K Governor and its State Chief Minister are taking decisions on the pressure of anti national elements. They further alleged that terror groups are terrorising Hindus living in the border districts of the state. A Press notification said that member central advisory board of VHP BL Sharma Prem while addressing the protesters asked whether Hindus have no right to practice their religion in the state. “Why the religious precession was attacked in Rajauri by the anti national elements in front of the administration?,” he said. He added that instead of detaining attackers police arrested hindus.  Prem demanded immediate release of those detained in false cases, withdrawal of false FIRs lodged and restoration of Amarnath yarta duration atleast for two months.

VHP state Media chief Vinod Bansal said that the J & K state machinery kept mum on any action against anti nationals. He said, “Today we burn effigy of the state Governor to protest against his repeated interference in Hindus religious affairs by curtailing Amaranath Yatra duration and not protecting life and property of Hindus living in border areas.”

Bansal warned that if the governor does not turn up, they may extend this protest to the whole country.

Sat Mar 10 , 2012
Bangalore: 31st state conference of Akhil Bharatiya Vidyarthi Parishath (ABVP) to be held on March 14, 15 and 16 at Hasan, Karnataka. Top ABVP functionaries of state will participate this 3 day conclave. Office bearers of different ABVP units will attend this conference in which issues of national interest will be discussed. Concerns on commercialization of education, corruption in […] 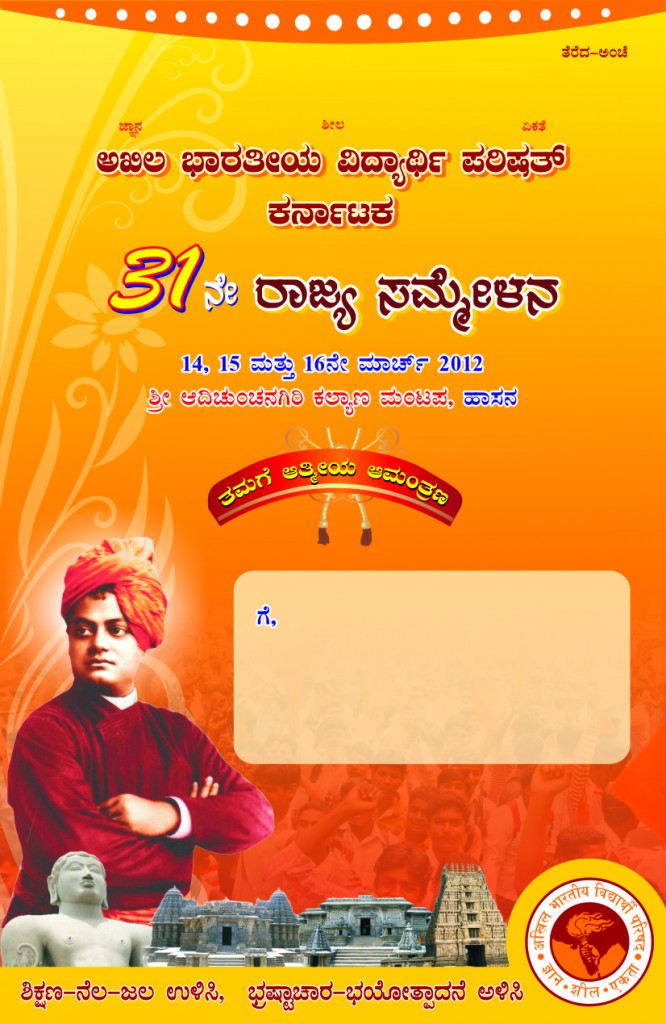