New Delhi, November 17, 2012: “Balasaheb Thakrey has been our inspiration & strength while taking up various Hindu causes. With his departure from this world, a fatherly support is gone for all Hindus.” – Said Dr Pravin Togadia, VHP International Working President while paying tribute to Shivsena Supremo  Balasaheb Thakrey.

Dr Togadia further recalled, “When Babri fell in 1992, there was a competition of shrugging of the responsibility & condemning the demolition. Maa. Balasaheb Thakrey came down heavily on all those who condemned the demolition of Babri & stood up strongly at a great height as a real Hindu leader saying, ‘Yes! I did it! Yes, Shivsainiks did it & I am proud of them.’ In the riots that ensued aftermath the 1993 serial blasts in Mumbai, Shiv Sena under the strong leadership of Maa Balasaheb Thakrey ji, protected Hindus all over in Mumbai & reigned in the jehadi elements.”

Dr Togadia expressed, “Maa Balasaheb ji was the real Hindu Hruday Samraat, who never compromised on any Hindu issue for the power or any allurement. His vision for Hindus, Bharat & Hindu Rashtra was clear. He stood with all of us who chose the difficult path of the similar vision in the atmosphere polluted by power mongers & vote greedy Muslim appeasement. In the issue of Muslim reservation or of Bharat-Pak Cricket he had his clear & strong views which gained him criticism from the so called seculars but he kept on walking on his chosen path like a True Tiger! He would always take trouble to call many of us when we would raise any Hindu issue. I recall his support call when the Rajasthan Govt arrested me for distributing Trishool & his roaring Har Har Mahadev, Jai Bhavani – Jai Shivaji still rings in my ears.”

Dr Togadia said, “Now it is the responsibility of all Hindus to fulfill his dream of Hindu Rashtra. I expect the Union Govt to pass the law to make grand Ram Temple at Bhagwan Ram’s birth place Ayodhya– the dream Balasaheb always cherished. I also expect the Maharashtra state Govt to urge the Union Govt not to hold Bharat-Pak Cricket anywhere. Our sympathies for the Thakrey family & for the Shiv Sainiks. His body is gone, but his blessings remain on all Hindus.”

Sat Nov 17 , 2012
ABVP Press Release: A SAFFRON STORM SUBSIDES: ABP NewDelhi Nov 17, 2012: The Akhil Bharatiya Vidyarthi Parishad (ABVP) mourns the sad demise of Balasaheb Thackeray. His absence marks a moment in the politics of Maharashtra where even time will stand still and pay homage to this great son of the […] 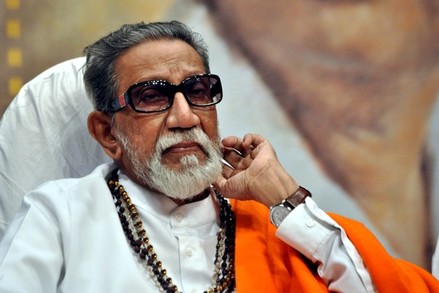