Gwalior, February 13: Criticising Salman Khursheed’s remarks about Batla House encounter, Dr Pravin Togadia, International Working President of VHP said, “Salman Khursheed claims that the encounter was fake, the govt was going to take action against it but kept quiet due to election and Sonia Gandhi’s eyes were full of tears seeing the photographs of the encounter.

In an election public meeting in Azamgad- Uttar Pradesh, the Union Minister of Law Salman Khursheed has crossed all limits in his constant endeavour to offend the majority of India.

Togadia has commented that, to win Azamgad seat and dreaming of winning Uttar Pradesh election to save Rahul Gandhi’s image, people like Salman Khursheed are going to the extent of offending India, our brave Army and Police. The VHP president said that the PM cries seeing pregnant wife of Dr Haneef who was caught by Australia, PM also cries and begs to Kuwait when a Muslim man is punished with removal of his eyes per their own law, now Khursheed claims that Sonia Gandhi cried seeing dead Jehadis in Batla House encounter!

“Tears of the Govt representatives flow freely only for Muslims and never for Sanaatani Hindus, Sikhs, Jains, Buddhists, Tribals, OBCs, SCs and others! Neither PM, nor Soniaji nor Salman Khursheed or anyone ever cried for the thousands of army men and  police killed at the hands of Jehadis in Kashmir, Assam, Mumbai, Delhi or at the hands of Naxals!” alleged Togadia.

VHP has appealed Citizen of India saying that the time has now came for all patriotic and  truly nationalist citizens of India to democratically stand up against such anti-national remarks and  actions – be it elections or by democratic agitations.

The same Salman Khursheed – India’s sitting Law minister promised in his wife’s election campaign 9% snatching from OBC quota for Muslims and now like a serial offender he again insults India and the late police officer who was rewarded for his bravery in Batla house for the same encounter, says Togadia. He added that if Salman Khursheed, as a Law Minister is against his own Govt’s decision that the Batla House encounter was a brave deed by the police, then he has no right to be in the govt neither as a Law Minister nor even as an M.P. of India.

VHP’s International Working President says that those who have any sympathy towards Jehadis have no place in the democracy. Thousands of innocent Indians were brutally killed and maimed by Jehadi attacks from Delhi to Mumbai and Bengaluru to many places. But neither Salman Khursheed nor his superiors shown any sympathy for the victims, instead, they are siding with the Jehadis!

Togadia harped on the Congress Party and elements like Khursheed saying that, after a conspiracy to snatch all castes’ Hindus’ Roti, Education, Employment, Bank Loans to be given to Muslims, now the govt is systematically moving towards persecuting majority of India to appease Muslims.

VHP has condemned all these efforts and appeals all to protest against this behavior, saying that democratically Muslim League did the same at the independence time and India was forced into partition and now this entire ‘I am with Jehadis; NOT with India’ gang is breaking India again.

Tue Feb 14 , 2012
Chennai: Is conducting Ayudha Puja or Saraswathi Puja in government offices a non-secular activity deserving to be banned? ‘No’, the Madras high court has ruled. “Showing respect to the place of work and the objects of work will in no way offend the feelings of others or affect secularism. Ayudha […] 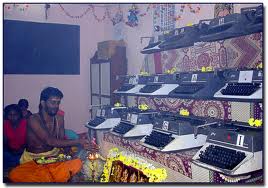