Vishwa Hindu Parishad (VHP) strongly objected to the recommendation of a Working Group on Animal Husbandry and Dairying for 12th Five Year for promoting beef export. It demanded to immediately withdraw the recommendation and apologise before the countrymen come out in the streets. In a statement issued in New Delhi VHP secretary general (organisation) Shri Dinesh Chandra said beef export would amount to murder of the Constitution and dharma.

It is to be noted that Animal Husbandry & Dairying Department of Ministry of Agriculture has sent a report to the Planning Commission recommending to lift the existing ban on beef export. Para 12.3 at page 73 of the Report under Chapter 12 ‘Meat and Abattoirs’, recommends that “there is an existing ban on beef exports; therefore it is necessary to revise the EXIM policy to allow beef export.” The report submitted by the Working Group for the 12th Five Year Plan is more inclined to the slaughtering of animals rather than protecting them. The report of the Working Group is available on the website of Planning Commission: http://planningcommission.nic.in/aboutus/committee/wrkgrp12/agri/AHD_REPORT_Final_ .pdf.

Teachings of Vivekananda will inspire to decipher the universal consciousnes: Dattatreya Hosabale 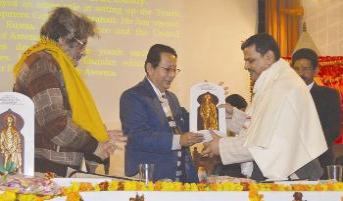