Dismissing RK Pachauri report on Sri Ram Sethu, the VHP patron Shri Ashok Singhal demanded cancellation of the entire Setu Samundram Project. He said no move to damage the Ram Sethu would be tolerated by the Hindu society. He emphasised the Ram Sethu should be declared an International Heritage and the whole area as the protected area. “Messing up with our beliefs will not be tolerated at any cost,” he warned.

In a press statement issued on July 3, Shri Singhal said the expert committee report appears to be written with prejudice. “Previously when the report about glaciers by Shri Pachauri has been proven wrong then it is a matter to think that how much one can believe this report. However, one fact also emerges out from this report that the organisms/creatures living in the bay area near the Ram Sethu has economic and ecological importance and they are looked after in a scientific way, hence it is necessary to protect the whole area,” the statement said.

Mon Jul 9 , 2012
Andal, a foster child of Vishnuchitta or Periyalwar, is one of the twelve Alwars of Vaishavite tradition. She, also known as Godhai, eventually came to be known as the consort of Vishnu. She is regarded as Goddess. Her poetic talents were extraordinary and she composed Thiruppavai consisting of 30 hymns and Nachiar Thirumozhi in […] 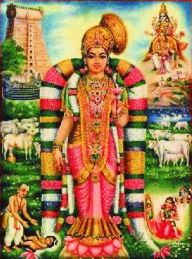