Her Excellency PRESIDENT OF BHARAT

Subject: The Sri Amarnathji Shrine Board (SASB) under the chairmanship of the  present Governor of Jammu & Kashmir H.E. Sri Narendra Nath Vohra has been hurting the sentiments of Hindu society through commission of serious irregularities in the conduction of the sacred  Amarnath Yatra!

With humble respects and compliments, we wish to approach your highest offices with the following submission:

(A)       Your learned-self knows well Sri Amarnath Cave Temple Pilgrimage – the testing Yatra by the Sant Fraternity and the common devotees to Mount Amarnath at an Himalayan altitude of 13,500 ft surrounded by snowy mountains to have a glorious Darshan (divine glimpse) and blessings of Baba Amarnathji has been in vogue since times immemorial, i.e., even during the Mahabharata period over 5,000 years ago it was venerated and celebrated as one of the ‘ancient’ Yatras along with those of the other spiritually elevating pilgrimages of Badrinath, Kedarnath, Pasupatinath, Gangotri, Yamunotri and Kailash-Mansarovar conducted by the Rishi-Krishi Tradition/Himalayan Tradition covering the Sahasraar Region (Spiritual Crown Centre radiating on a global scale since pristine times strong spiritual vibrations, currents and profound ideas; the region celebrated in modern times as the ‘Roof of the World’, i.e., the highest region) of the living entity Mother Earth. Negotiating with the now sweet and now rough icy, stormy or rainy Himalayan moods and the prohibitive rugged terrain, the Hindu lion-heart pilgrims have anyway been trekking and mountaineering to the Holy Shrine of Amarnath all the year round, but the mega Yatra taking place between Jyestha Purnima and Shraavan Purnima does have an outstanding significance in the calendar of activities there. The zeal and zest of the pilgrims never diminished in spite of natural calamities and terrorist attacks. Their numbers instead kept on mounting year after year.

(B)       As a response to some mishaps that took place due to vagaries of nature, the ‘Sri Amarnathji Shrine Board (SASB)’ was formed in 2001 CE whose duties, rights and scope of work were defined under the ‘Jammu-Kashmir Sri Amarnathji Shrine Board Act, 2000′ by the State Government there. Also some clear directions pertaining to this Act were issued by the Hon’ble High Court of Jammu & Kashmir. H.E. the Governor of the State was appointed the ex-officio Chairman of this important Shrine Board. In its initial years this Shrine Board facilitated and entertained the pilgrims by deliverance of several remarkable works. But, unfortunately, for the last some years the Shrine Board working under the stewardship of the present Governor of Jammu & Kashmir H.E. Sri Narendra Nath Vohra has unduly jumped its mandate and disturbed the landscapes and mindscapes thereby upsetting the global Hindu society and deteriorating the sensitive atmosphere of Jammu & Kashmir.

(C)       Some of the controversial decisions in the matter taken by the present Governor are listed hereby:-

(i)         In order for facilitation of the Amarnath pilgrimage, the Government of Jammu & Kashmir had made a provisional allotment of some plots of land for the cause of this Yatra which was also duly validated by the Hon’ble High Court. But intimidated by the pointless hullabaloo and dust raised by the separatists in the year 2008, the present Governor made an unauthorized declaration of returning the said land to the Government. With this defeatist declaration and by illegally relinquishing the responsibility of running this Yatra to the Government his lack of right aptitude and temperament was out in the open. At that time this unbecoming declaration had not only fired emotions in the sensitive region of Jammu & Kashmir but also disappointed and frustrated the whole nation and the entire global Hindu presence that forms 1/6th of the 7 billion global population. Due to his irresponsible decision Jammu remained closed for 63 days, 14 people lost their lives and the people had also to bear the loss of material wealth worth over INR 1,000 crores. The loss caused due to the division between the Kashmir Valley and the Jammu Region cannot be counted.

(ii)        It is a matter of great happiness for all who look upon the State of Jammu & Kashmir as an integral part of Bharat and celebrate the Amarnath Yatra as the State’s greatest annual event that now this Yatra occupies an outstanding position in the national and international pilgrimage map and the pilgrimage now registers an expotential growth in terms of participation of pilgrims which is why the Hon’ble High Court had also issued unambiguous orders in 2004 that the period of this Yatra should be for two months. Till 2009 CE the Yatra ran for 60 days. But in 2010, for some strange reason, it was reduced to 55 days. Faced with protests from the Hindu society and the Saint fraternity, His Excellency the Governor gave assurances for a 60-day Yatra the following year. But when the time for the Yatra came in 2011, he, under a mysterious arbitrary move, curtailed the Yatra duration to 45 days .They made every deliberate exercises to further curtail the duration of the Yatra in 2012. They finally curtailed it to 39 days and arbitrarily decided 25th June as the Muhurat for 2012. They decided this date in the month of October-2011. Is it possible to forecast the weather 9 months in advance? They brought forward the Langarwalas in support of this conspiracy. They opened the Pandora’s-box by bringing them into this controversy. Their conspiracy was exposed when many Langarwalas came forward and said that they are ready to hold their Langars throughout the year. Hindu society and saints made a strong protest but the Board turned a deaf ear. When the Gujjars of Kashmir and some youths offered themselves to clear the way they were disallowed by using force. The society made a strong protest against this conspiracy but their voice was crushed brutally.  Every year by raising an unwarranted controversy over the time-honoured fact of Yatra duration including its flag off and the finale dates, H.E. the Governor creates tempests and this atmosphere of uncertainty appears to be conspiring to put a question mark on the future of the Yatra. If the annual 22,000 ft high altitude Mansarovar Yatra and the 12,000 ft high altitude Kedarnath Yatra can start in April/May and run with zeal and zest for full six months then why on earth the 13,500 ft high altitude Amarnath Yatra cannot start on Jyestha Purnima and run for two months till Shraavan Purnima (Raksha Bandhan Day) which 60-day period smoothly falls within the bracket of the said 180-day period?

(iii)       Instead of performing his duties as set down by the Shrine Board Act, H.E. the Governor has been hanging out with and propping up those things and activities that are expressly prohibited by the Constitution of Bharat, the Sri Amarnathji Shrine Board (SASB) Act and the Hon’ble Judiciary. His mandate is for smooth conduction of and extensive & intensive infrastructural facilitation for the Yatra including its safety and security aspects. The Board should build Hospitals and Yatri-Nivas at various points and find alternative routes for the Yatra. They have nothing as yet to report on these issues. Unfortunately, the H.E. Governor’s energy and focus is misspent every year on his misplaced keenness to meddle with the Yatra duration and its traditional Muhurt. Given the great significance this august and pristine Shrine commands in our national psyche and life, the unjustifiable annual acts of omission & commission affecting this Yatra only serves directly or indirectly the agenda of the separatists that do the bids of forces that handle them from across the borders who, the world knows, want that this Yatra that ensures Bharatiya integrity & unity must be done away with at any cost for all times to come.

(iv)       From their activities for some years now, the character of the present Board appears to be anti-Hindu and anti-Yatra. The H.E. Governor, unfortunately, entertains such irreverent members on the Shrine Board panel that have no faith in Baba Amarnathji and the Yatra. One member says this Yatra endangers environment and it melts the glacier of the place. Everybody knows that there is no glacier whatsoever there. By circulation of such fallacious, misplaced and misleading pieces of their mind they strike at the roots of Hindu reverence and faith and question the very raison d’etre of the natural Shrine. Yet another member questions the scientific base and raison d’etre of Baba Amarnathji. About 70% of manpower on the Shrine Board is non-Hindu as against the time-honored universal principle that people not subscribing to the school of belief, faith and worship of a Shrine or place of worship or religion must not have a locus standi on its Board or Trust. It is quite discernible as to whether the present Shrine Board constituted on such anomalous and irreverent lines would promote this sacred Yatra or ensure its uprooting at the end of the day!

(v)        Your Excellency, there are more such cases in point pertaining to the weird approach and functional patterns of H.E. the Governor that strike at the roots of Hindu faith and points of veneration. The unfair decisions being taken by him by jumping the Constitutional mandates are upsetting more the situation of Jammu & Kashmir and hurting ad infinitum the sensibilities of the Hindu society.
(D)       We, therefore, hereby humbly request Your Excellency to –

1. Call back the Governor of Jammu & Kashmir without delay which would preempt further deterioration in the situation there;

2. Reconstitute the Sri Amarnath Shrine Board (SASB) with inclusion of only those members in its rank & file that have Aasthaa (faith and reverence) in Baba Amarnath;

3. The Muhurt and duration of the Yatra should be determined as per the Hindu Aastha and tradition which speaks of the Yatra running from Jyestha Purnima to Shravan Purnima. The area of Baba Amarnath comes under the Hindu scriptural jurisdiction and purview of the Jyotish Peeth at Joshimath and its head His Divine Grace Jagadguru Shankaracharya Swami Vasudevanandji Saraswati has clearly declared that Yatris have every right to visit the Holy Shrine throughout the year and it should start on Jyeshth Purnima this year.  So far as the question of vagaries of nature and weather is concerned, it is a well-known fact that when it is bad then every such Yatra remains in suspended animation and awaits the situation turning fair. Such serene and prayerful wait the pilgrims practice in this Yatra as well. The Yatra last year had started on 29th June as per the Governor’s scheme of things, and even then the Yatra had to be suspended 6 times due to prohibitive weather conditions. Did not the pilgrims practice patient wait that time round? Can the Governor guarantee that if the Yatra begins on 25th June it won’t be suspended?

4. On similar lines as the hills and mountains of Tirupati and Mata Vaishno Devi have been designated as Sacred Hills and Sacred Mountains, the Amarnath Mount and the area surrounding it and also covering all possible conduits leading to it should be declared as Sacred Sri Amarnath Kshetra.

(E)       Your Excellency, the Governor of a State functions as your representative. His activities, therefore, reflect on the standing of your highest offices. If a Governor jumps his mandate and makes a wide off the mark judgment that also upsets the trustworthiness of such a dignified post of the country. We hope that the withdrawing of the Governor of Jammu & Kashmir with immediate effect would surely prevent the situation in the State from further deteriorating. That key post in the State of J&K calls for and deserves such an intuitive and farsighted Governor who can not only ensure the country’s integrity but also meticulously observe his constitutional mandate to always uphold the national interest and that of the national society.

Thanking Your Excellency in anticipation,

Fri Jun 8 , 2012
HYDERABAD June 7-2012: ALL INDIA CENTRAL EXECUTIVE COMMITTEE MEETING OF SABARIMALA AYYAPPA SEVA SAMAJAM URGED THE CENTRAL GOVERNMENT TO DECLARE Kerala’s SABARIMALA AS A NATIONAL PILGRIME CENTRE, SO THAT PROVISION OF BASIC AMENITIES TO THE PILGRIMS WILL BE COME STATUTORYAND CONSTITUTIONAL OBLIGATION OF THE GOVERMENTS BOTH CENTRAL &  STATE. SABARIMALA […] 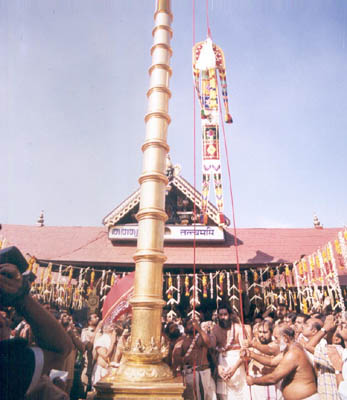