He was delivering the inaugural speech  in of  ‘Advocates for Hindutva‘ conference at Davanagere, Karnataka.

“Lawyers, being a part of  judiciary proceedings should ensure to protect the justice and social health, though legal arguments are carried far and against in a case. Hindutva is the only concept which focus upon global justice and to eradicate all kind of injustices. There is a need to understand the concepts in Hindutva, hence the  title for today’s event is Advocates for ‘Hindutva’,” clarified Mohan Bhagwat.

“Hindutva is the most needed concept to achieve universal integrity and universal peace as there is increased violence, injustice. The world is in a need of the eternal values of Bharat. Such an lifestyle based on these ancient values is known as Hindutva” added the Sangh Supremo.

“The very basic concepts like ‘Sarvepi sukhina santu‘ are never found else where other than Hindutva. Justice is hard on its focus, which condemns the wrong, and upholds  the right. The life should be led according the Dharma, keeping Artha and Kama controlled to reach the Moksha, as per Hindu sway of life”

“Every Indians are Hindus by this concept of nationality. The ancestors of Indian Muslims were Hindus only. Hence each Muslim of this nation culturally a Hindu. Unfortunately the vote-bank politics has divided them and grouped as minority. Few fundamentalists demand to implement Sachar Committee report but we still oppose it which is a threat to social integrity” said Bhagwat.

“The role of advocates is to stand for the justice, ever. Hence the conference ‘Advocates  for Justice’ is nothing but ‘Advocates for Hindutva’. Legal activism is a major need of the hour by which we can protect Hindu way of life from all cultural invasions” said Mohan Bhagwat quoting the example over the legal debate of Homosexuality in India.

Sri Siddhalinga Swamji of Harihara and Justice M Ramakrishna, Rtd Chief Justice of Assam and Jammu-Kashmir were also present along with Mohan Bhagwat during the inaugural ceremony.

Nearly 1400 advocates from different parts of the state are participating in this conclave.

Hindu Jagarana Vedike, a pro-Hindu outfit of RSS is organising this event on commemoration of its silver jubilee year.

Sun Mar 4 , 2012
Today’s The Indian Express published an article, more correctly to say an analysis on the mounting violence across Northern Kerala for various socio-political reasons. Read, share and comment your views on the issue. -Editor “Riots of late which break out for insignificant reasons have started spreading out to areas hitherto untouched by these […] 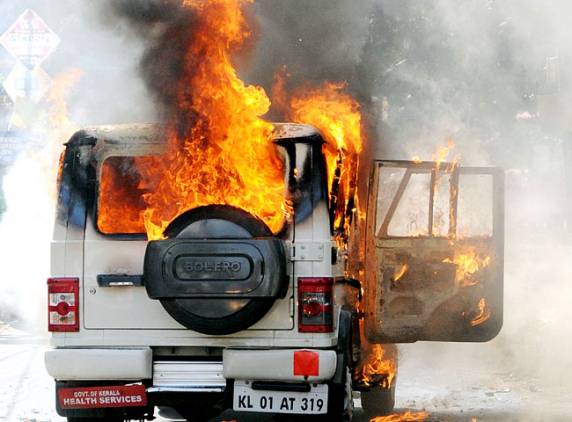