I had the privilege to attend the conference on ‘POK and Northern Areas’ at Indian International Centre, New Delhi on the 22nd of Feb, 2012 by the Centre for Security and Strategy. It was a august gathering of the best minds on POK. Hence I was witness to the most erudite deliberations on the past, present and the future of POK vis-a-vis India. A follow up session was held on the 23rd Feb at the ‘Deenadayal Shodh Sansthan’.

It was during these two days I had the opportunity to converse with a array of dignitaries who were privy to the happenings in J&K and particularly the POK. What I present below is a excerpt of the informal conversations I had with various dignitaries, who I think represent a section of the stakeholders of the POK issue that is plaguing India. My intention in presenting this set of conversations is to convey the sentiments, importance and the way forward of the POK issue through these people who have either experienced the happenings of POK or have worked extensively over the issue.

As a disclaimer, let me reiterate that this is a extract of my informal conversations I had with the below individuals on POK and issues related to unity and integrity of India.- Prashanth Vaidyaraj

Myself – Arun Ji, after the conference on POK we have lot of information with us about the different aspects of the issue. But the challenge is to decide on the best way to disseminate this info to the public of India. What do you suggest is the best way?

Shri Arun Kumar – The best way is to talk to people about the POK tangle and our legal position on it. Information has to be spread in regional languages and in local dailies and periodicals. You can arrange for a small gatherings of people in your locality and have an expert on POK or anyone from POK talk to them. POK should be discussed in milan bhauddiks too.

Myself – The mainstream media is too obsessed with one viewpoint on J&K and that is the Kashmir valley. Why do you think the media acts in this way and how can we change that opinion in the media?

AK – A section of the intelligentsia of the Kashmir valley has been successful in driving its point of view in the media and hence the discourse is currently focussed on only the Kashmir valley. Now, it is upto us to change this discourse to a larger issue of getting back POK and Aksai chin. That can happen only when we disseminate the information we have with us to the general public. Once the public view is generated, the media will automatically change the discourse. This can happen only when the public mood on getting back POK and Aksai Chin is generated in the country.

Myself – This is a great initiative which will enable people from different walks of life to know the truth about J&K. What has been the response from people on this?

AK – I knew that people hardly had any information on this issue. There is too much to J&K than just the valley. Not just commoners, even parliamentarians are not aware of the details on POK. Infact, yesterday a member of a major political party who attended the conference confessed that she did not know most of the details discussed at the conference. She thanked me for the invite. So, we also need to educate our parliamentarians along with the public. The government will take up the cause and raise the voice only if the people of the country raise their voice. So, this is where educating the masses on POK becomes all the more important. We will discuss the way forward in details in today’s conference.

Myself – Sir, at the conference on POK yesterday you ended your speech by saying that we need to do everything possible to get back POK and to establish ‘Akhand Bharath’. But, recently In Bangalore, several so-called ‘secularists’ got together and objected to any change in the text book syllabus that included the definition of ‘Akhand Bharath’. While we here are deliberating on getting POK back, I think we have a larger task to take on such inimical forces within our country. How do you think we can achieve to do that?

Thupston Chhewang – Yes, that is a big challenge to educate our own people first. By ‘Akhand Bharath’ today, I mean getting the lands that legally belong to us and have been illegally occupied by China and Pakistan. We are not talking of taking back areas of Pakistan and Bangladesh. We can defeat inimical forces within our country only by educating public at large about the current status of such illegally occupied lands and its strategic importance to us. It is our responsibility to impart this knowledge to the public and generate public voice on this issue and make the government hear to their demands.

Myself – There is a huge disconnect among people who live at the border areas like Ladakh and people in states like Karnataka which are down south. How can we improve their relationships and feeling of oneness.

Myself – Media portrays as if the voices in the Kashmir valley as the voice of the whole state of J&K. How do the local people of Ladakh and Leh view the issue. Also, what steps have been taken by the politicians at the centre to address their problems?

TC – The people of Ladakh are nationalists and will never support the separatist voices. Ladakhis are always in the forefront to defend the borders. But yes, they too have their share of grievances and the government should address them. Infrastructure has to be improved a lot and higher education facilities needs to be improved. This does not mean the they are asking for something in return for their loyalty to India. It is only a genuine need that has to be provided. Politicians have been showing concern about their difficulties. BJP had organised the tour of the border areas to understand the problems of the people at the borders. Such initiatives are a welcome move to get these people into the mainstream.

Myself – I think that people in other parts of India view Ladakh more as a tourist destination and less as a state of the Indian union that needs as much care as any other state. What do you think about such portrayal of Ladakh? How does that affect the Ladakhis?

TC – Yes, that was the mainstream view about Ladakh till very recently. But that view is slowly changing as people to people interaction is increasing. I think tourism is a good thing and the more it improves, the better it is for the local population too. The Global Buddhist Congregation in New Delhi was a huge game changer for the Buddhists of Ladakh, who are a majority there. Since the conference happened in our own country, they now feel closer to the capital. Such conferences must be held more often which will instill a sense of pride and belongingness among the Buddhists of Ladakh.

Myself – Sir, it was great learning experience talking to you and thanks for your time.

Myself – Sir, you exposition at the conference on POK touched the audience’s heart. The moderator tried to stop you but the audience wanted you to continue. People like us who can’t even imagine what you went through during those times got to know your struggles. What is the way forward for you?

Yuvraj Gupta – We will keep on fighting till we get justice. Several people here have heard stories of atrocities on the POK refugees by the Pak army from their parents and relatives. But I was a witness to it as a 15 year old. I am now 79, but I cannot forget what I and other refugees went through. I do get emotional whenever I speak of it.

Myself – Sir, please go on!

I saw bodies lying on the road and we were unable to give them a decent cremation and hence had to see the bodies being eaten by stray dogs. Yes, I got emotional yesterday while speaking but nothing has been done all these years by anyone.

Myself – Sir, I should tell you that we have failed you, India and Hindus have failed you people. But it is also true that such information has never been in the media and people across India do not know this. That is a tragedy. I am from Bangalore and several people like me never knew about the kind of atrocities you people have gone through. Please tell me more.

YG – Even today many live in camps that are unfit for human living. We do not have any facilities in education and no voting rights. Very little about us and the atrocities on us is known in India or the outside world. Not even a word of sympathy has been said about us either in India or the UN. But we have to fight out own battle till we get justice.

Myself – How do you plan to achieve that?

YG – We have formed the ‘POJK Refugee Sangarsh Morcha’ for this purpose and I am its current chairman. We intend to give this information at such events and spread the message. We will also visit various Indian cities and distribute information about things that happened to us.

This is where people like you need to help us. Please do spread the information about us to everyone you know. I will also give you all the required information you want. We will stay in touch with you.

Myself – Sir, we will surely do all that we can. Please contact me, whenever you are in Bangalore. Thank you. Myself – Sir, great to know you. Had read several issues of Swadeshi Patrika online. Great periodical. What is your periodical doing in the POK aspect and how are you involved?

Ajay Bharti – I am the editor of Swadeshi Patrika and we have covered several topics relating to J&K and POK issues. Now, we will give more importance to the task of getting back POK.

Myself – Traditional mainstream media had neglected the POK refugees and their problems. Even Jammu and Ladakh are never mentioned. What do you propose to do on this front?

AB – As part of Swadeshi Jagran Manch, we undertake trips to Jammu to understand the problems of the refugees there. We try to solve some issues of both the Kashmiri Pandits and the POK refugees. You too are welcome to be a part of our trip to Jammu. It is open to anyone who is interested to visit and understand and witness the problem of these people. Only when people from across India witness the problems of the refugees in person, will the discourse on J&K change in the mainstream media too.

Myself – Wont such trips become kind of disaster tourism and heckle the refugees there?

AB – No, we do not infringe on the refugee camps or their homes. We only go to understand their problems and know the ground situation there. No attempt is made to heckle them of force them to entertain us. It will be upto us get the knowledge we require. We have been to Jammu several times and have never come across any complaints. Why dont you come for dinner to my house? We can talk over at my place.

Myself – Thanks for the invite Sir. It was great talking to you. But will surely call you the next time I am in Delhi and meet you to discuss these issues. Namaste. 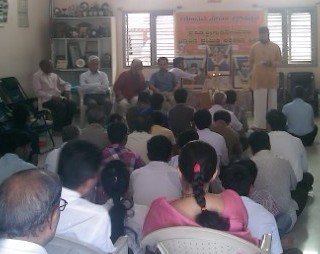