New Delhi, July 26, 2012: Today, Dr Pravin Togadia has written a letter to the new President of India, Pranab Mukherjee. The letter dwells on the issue of current ethnic cleansing of original tribes, other Hindus & Non-Muslims including Christians in Assam perpetrated by Bangla Deshi infiltrators. Dr Togadia is very keen on Assam unrest, said “This is not the issue to be simply discarded as if it does not exist. The Union Home Secretary & the Chief Minister of Assam claimed that there was no Bangla Desh hand in the violence when the situation is exactly opposite”.

Please read Togadia’s letter & also the enclosed annexure (Total 9). That is just the glimpse of the severe crisis & risk to Bharat’s safety & security there.

Nomoshkaar! At the outset, let me wish you congratulations for becoming the 13th President of Bharat – The 1st Citizen of Bharat. I am sure with your long experience in insight in Bharat, now Bharat will try to solve the problems faced by Bharat’s citizens.

Now, without wasting more time in formalities, I wish to draw you urgent attention & immediate intervention to the gruesome plight that Bharat’s original citizens in Assam have been facing. As you are aware, last few days, Assam is burning. Lakhs of Original Tribals have been attacked & forced to flee their homes, villages & towns. Their homes burnt, their little land grabbed & their loved ones lost in the horrible arson & murders by Bangla Deshi Infiltrators now settled in Assam. The relief camps are pouring with the victims of this Ethnic Cleansing of original citizens of Bharat by the Infiltrators. With your kind sensitive heart, if you see the wrinkled faces & tear-filled eyes of those old tribal women & those young worried nursing mothers holding their new-borns in their hands, you will realize the agony & pain they are going through.

This is not the first time it has happened in Assam. It has been going on for over 2 decades. Karbi Anglong, Khasi, Dimasa, Bodo, Jaintia & many other local Tribes who have made Bharat’s North East eco-friendly with their environmentally simple life styles, who have made Bharat rich with their great art & culture are being brutally attacked, their jungle habitats burnt, their women raped, their men fired at in close range & ultimately they are forced to either die at the hands of Bangla Deshi invaders or leave their age-old traditional habitats.

Unfortunately, just like the authorities ignored first, then neglected & then manipulated the ethnic cleansing in Kashmir done by Pakistan supported separatist groups, the Assam’s systematic ethnic cleansing of local tribes, other Hindus & other Non-Muslims is being ignored by the authorities knowing fully well that the happenings in Assam are the systematic efforts of Bangla Desh helped by Jehadi elements to create Greater Bangla Desh & socio-politically occupy Assam & many parts of North Eastern Bharat.

Mr. President, coming from Bengal, you are well aware of the plight of Bangla Hindus in Bangla Desh. Kashmir situation has gone out of control & now Assam too going the same direction. Unfortunately, the citizens of Bharat are made into minority there by the invading Bangla Deshi infiltrators (Please see the Annexure – total 9 – attached here for more important details.)

In your new tenure as the President of Bharat, we wish you all the best & again urge you to intervene in the Human Rights crisis created by Ethnic Cleansing of original tribes, other Hindus & non-Muslims in Assam. Kindly do take out time from your busy schedule to go through the documents attached to this letter to get a glimpse of the huge security threat from bordering countries to North East & therefore to Bharat. Original people of Assam – the citizens of Bharat – are waiting for you to show your kind heart & diplomatic acumen in saving them from the modern day invasion from Bangla Desh & Pakistan. Be their savior in their agony & pain, Mr. president, so that citizens of Bharat in other states would not have to nationally & internationally raise such issues but focus of taking Bharat to newer heights.

Dhanyavaad. Hoping to see serene Durga Pooja celebration in your Presidential palace as well as in the Devi worshiper Assam this time in Navaraatri. Regards,

B) Photos of grim situation in Assam – Tribes & Relief Camps)

How BANGLADESHI MUSLIMS wiped the Assamese out in their OWN land

Plan to Create Greater Bangla Desh including Assam in it

Fri Jul 27 , 2012
Bangalore July-27: In Assam, a sustained and systematic violence has been unleashed against native population and tribal communities. As of today Nearly 2,00,000 (2 lakhs) people have been displaced from their homes. An emergency response to the fast developing crisis is a need of the hour.Param Foundation has initiated crisis management […] 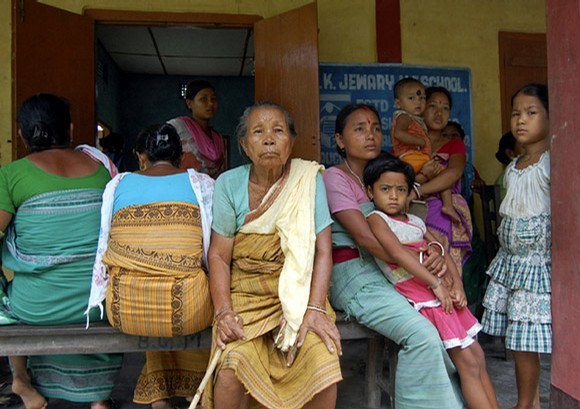