by PK Sukumaran in ORGANISER

The Communist Party of India (Marxist) who unleashed unprovoked and cruel attacks on the RSS workers in Kerala are now paying heavily for its misdeeds. The party which has been considered as a political monolith in the State is now on the verge of collapse as a sizeable number of party workers and sympathisers leave it every day. The voice of dissent against the autocratic and arrogant style of functioning of some of the State leaders, especially that of Pinarayi Vijayan, the State secretary is coming from VS Achuthanandan, the octogenarian ex-Chief Minister and the present Opposition leader in State Assembly.

The brutal attacks on RSS had begun nearly 45 years back. The only reason for this was the intolerant mindset of the party cadres not to allow the RSS ideology in Kannoor District as they considered the area as their own pocket. When attempts were made to start RSS shakha in some parts of Kannoor district in early sixties the communists sharpened their weapons and because of that every attempt had been failed. But anyhow when some shakhas were started, there were attacks from the CPI(M) cadres. After the party split in 1964, the Left faction i.e., CPI(M) made systematic attempts to thwart the spread of nationalist Hindu ideology. When the work of Bharatiya Jana Sangh started in Thalassery, which was considered as a strong citadel of CPI(M), they started open assaults on the BJS and the RSS workers.

The immediate provocation for the CPI(M) was unexpected support received by the BJS candidates in the local municipal elections. Infuriated CPI(M) cadres brutally murdered Vadikkal Ramakrishnan, a mukhya shikshak of locak RSS shakha while he was returning to his house. It was a revenge, because he was an ordinary worker having allegiance to the Marxist youth wing and he left the party owing to differences with the labour wing of the party. This was the first murder of an RSS worker by the CPI(M) in Kerala.

Not only that but many swayamsevaks were targeted and many got injuries and many houses were burnt. The sole aim of the Leftists was to annihilate those who left their fold and check further exodus by threatening in every way. The leaders of that party openly declared on many occasions that they wouldn’t allow the RSS philosophy to flourish there. It is to be noted that in the murder case Pinarayi Vijayan was the first accused, but he was acquitted because he got all the help from the then EMS Government.

What was the crime committed by Ramakrishnan? Though an ordinary member of the usual working class, he was attached to the nationalist thoughts and took that thoughts to every nook and corner of Thalassery and its suburbs amongst the youth. It is to be remembered that through the murder of Ramakrishnan the CPI(M) tried to send a strong message that no body should dare to question the domination of the party.

After Emergency the political climate of Kerala had under gone a sea change and the common people who opposed the dictatorship of Indira Gandhi had opposed the treachery of Communists also. The CPI (Rightist) whole heartedly supported the Emergency while Leftists did nothing against it. At the same time, the bold and planned efforts done by the RSS and its front organisations throughout India attracted the imagination of the people and it reflected in Kerala also. Youths came close to the RSS ideology and there was an upsurge in starting new shakhas everywhere, so also the opposition from CPI(M).

The tiger who had tasted human body could not lie idle. So, starting from Kannoor there were murderous calls to the other parts of the State. In September 1977 CPI(M) attacked a Sangh shakha and killed the mukhya shikshak, Pannunda Chandran, a college student. He was the son of a Marxist party worker in Pinarayi Panchayat, the birth place of CPI(M) party State secretary.

Murderers continued their attacks and more RSS workers lost their lives. In the year of 1979 they murdered three, in 1980 nine, and in 1981 six. There was a chain of gruesome killings in which 21 youth fell prey to the Marxist daggers in Kannoor district itself. The leadership of CPI(M) took this district as an experimental area to see that threatening and finishing of the opponents would work or not. The result showed success, because nobody except the RSS raised a dissent or protest voice. At the same time CPI(M) had the privilege of having power in their hands. Truth and justice were far away as cases were registered by the police on the whims and fancies of CPI(M) leaders. So, punishment of the culprits was a distant reality and ultimately law and order became a causality.

Once while frequent clashes and one sided attacks were on the rise, Shri P Parameswaran, senior RSS pracharak appealed to Shri EMS Namboodiripad to take the fight from physical clash to ideological level, his reply was that both would go on simultaneously! People could see the irresponsibility and true intention of the party. It was then considered by everybody that Marxist blood thirsty cadres did not want peace and tolerance, but only suppression of other ideologies the result of which in 1981-82 period nearly 15 RSS workers had to lay down their lives outside Kannoor. On June 13 a former Marxist worker and his wife were murdered in a village in Alapuzha district in the broad day light. The only fault from their part was that they were attached to the RSS ideology and their two daughters became workers of Rashtra Sevika Samiti. Within two days of that incident two swayamsevaks were murdered by Marxist goonda gang while there were some rituals and festivals going on in a village temple. In the next month RSS taluk karyavah Viswambharan fell prey to CPM hidden attack with knife.

After murders in Aplapuzha district the CPI(M) unleashed attacks in Tripayar, a coastal village in Trissoor district. There the house of an RSS worker was burnt and two prominent workers were butchered. The planned attack on five RSS workers and gruesome murder of three of them at Murukkumpuzha on August 17 had shocked the whole State.

In 1996 three ABVP students of Parumala Pampa College were attacked in their classroom. When they ran outside to save themselves and jumped into Pampa river they were forced to drown, because they could not raise their heads owing to heavy pelting of stones by the SFI – DYFI gangs. Some ladies who were washing cloths tried to rescue the boys but they were also threatened to hold back. In 2002 two brothers were murdered as a retaliation against quitting of the party along with ten of their friends. Marxist leadership went on the annihilation tactics to upper levels and the result was the murder of Pannayanoor Chandran, the district secretary of the BJP. He was murdered in front of his father and wife.

He was a rising star of BJP in that area. He secured more than 13,000 votes in the Assembly elections just before the incident. Another shocking tragedy was the unexpected murder of KT Jayakrishnan a school teacher while he was teaching in his classroom in Mokeri UP School. The brutal murder by the Marxist ‘Kapaaliks’ shocked severely the small children in front whom the cruelty was done. Jayakrishnan was a dedicated worker of the RSS and State vice president of the BJP. In 2002 a woman, who was returning after taking part in the funeral of an RSS worker Uthaman, also fell prey to the Marxist knife in Kannoor.

In short each and every village of Kerala has to say at least one tragic story of Marxist attack on RSS and its sympathisers. It has to be noted that other ideologists were also not spared by the Marxists. But the Marxist devils preferred the blood and flesh of RSS more. Total number of RSS workers who scarified their precious lives comes to nearly about 200.

The annihilation game plan by the Marxists is still going on but with a difference. The unscrupulous cadres of that party raised their knife and sword against their own comrades who maintain some difference with official groups. In Vatakara a prominent dissident leader TP Chandresekharan was cut into pieces on the night of May 4, 2012. Since 4-5 years there was a strong group who had differences with the official section and they formed a parallel faction called Revolutionary Marxist Party (RMP). This group is slowly and gradually increasing its strength.

Immediate effect of the present crack in CPI(M) monolith was reflected in the resignation of Selvaraj, the Neyyattinkara MLA who won the recently held byelection on UDF ticket. Former CM VS Achuthanandan is now spearheading the voice of dissent but the Pinarayi faction is not in a position to touch him because it may result in the vertical split of the party. As, one who knows the history of CPI(M)’s arrogance and Stalinist style of working have the strong feeling that this party has to change a lot otherwise it would collapse.

Mon Jul 9 , 2012
Hong Kong: Mauritian Vice-Prime Minister, Shri Anil Kumar Bachoo inaugurated the first World Hindu Economic Forum (WHEF), which was held in Hong Kong from June 30 to July 1. During his inaugural speech , he emphasised on the need to develop new economic models, which are sustainable and generate wealth for […] 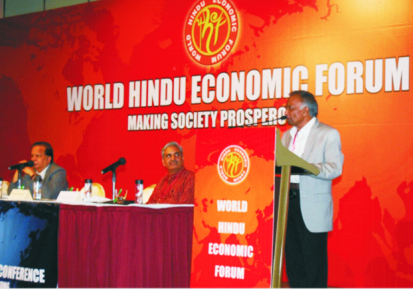