The book entitled ‘Dr Ambedkar -The Making Of Indian Constitution’ was simultaneously released in 3 languages, namely Kannnada, Tamil and English.

the book is published by Sapna Book Publishers

Mon Jan 23 , 2012
Mangalore Jan 23: The Canara High School ground at Dongerkeri witnessed a unique festival for unique people at the “Vishishtarigagi Vishishta Mela,” organised by Asha Jyothi, the forum for the challenged and their parents, on Sunday. Be it the fun activities, educative programmes or the free refreshments and food for […] 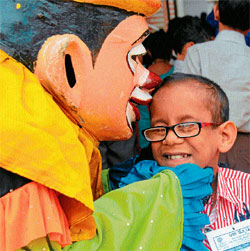