by Tarun Vijay in rediff.com

‘It is difficult to imagine such a phenomenon anywhere else. From being a cartoonist to becoming an agenda personified, outshining everyone else, is the unique distinction that Balasaheb created.’

I met Balasaheb Thackeray years ago when I edited Panchjanya. He was warm, knew exactly the inner details of Hindu family issues and challenges and said ‘Unless you change your outlook to Hindu problems, the movement will not progress much.’

I could not have agreed with him more.

He stood as the tallest figure speaking for a Hindu India  after Veer Savarkar. His vision for India essentially gave the rightful place to Hindus without compromising with the equal rights and privileges of the non-Hindu minorities. Essentially, his Hindutva meant ‘India, First and Always.’

He was unforgiving to traitors, anti-national outfits and shady elements that spoke more for Pakistan than showing concern for Indian sensitivities.

His Hindu-ness and the uncompromising devotion to the rights of the persecuted and the victimised masses made him a hero in the eyes of millions across the country.

While most political leaders cutting across party lines try to maintain a sense of sham political correctness and cosmetically envelop their responses in a secular envelope, Balasaheb roared like a Lion King candidly.

Calling a spade a spade and always keeping the warmth of hospitality intact at Matoshree for everyone, friend or foe, he conquered all that he surveyed winning life-long friendships from the top sirens of the film industry, corporate world, Muslims and political leaders from various streams of ideology.

He was the leader of the masses. And he meant what he said.

That was his strength. Challenge him and you may have regretted it forever.

His persona exuded no artificiality and no compromise. People knew that and hence the aura of respect around him.

The fence sitter leaders trying to compromise on basic issues in search of petty vote gains feared him. They really had to think twice after being lashed through Balasaheb’s hard-hitting editorials in Saamna, the Shiv Sena daily newspaper, targeting the shameless compromise on issues that affected Indian security and the social fabric.

He was an enemy of hate attacks on patriots, he would never allow a Pakistani march over Indian sensitivities, he would never care for the so-called Hindu organisations’ annoyance if the issue needed a frank and independent response.

He was in his own class, a personified republic of the masses who wanted an unforgiving line of judgment on hateful Islamist attacks on India.

His stand on the Kashmiri Hindu issue, Ayodhya, relations with Pakistan, Maratha Swabhimaan, and sham, often anti-national expressions of secularism bear testimony to this.

He walked his own path.

His undaunted support to Indira Gandhi during the Emergency is a different story altogether. Later, he became a strong votary of Hindutva and never looked back again at the Congress.

His annual Dussehra speech at Shivaji Park was a tradition that almost became a religious ritual when thousands of Shiv Sainiks would listen to his fiery speeches in his inimitable style gunning for the Congress and those whom he thought were anti-national and working against Hindus. With malice towards none, he would spare none.

He supported Ayodhya full steam. He refused to come along with his ally, the Bharatiya Janata Party , on Presidential elections. If it was Maratha pride for Pratibhatai Patil, Pranabda got his vote for being nice and a scholar.

He changed the usual image of the spineless, coward, trader Hindu type, always ready to compromise. He wanted all Indians to be treated equally and no special privileges to be given to anyone on the basis of religion. If you attacked a docile Hindu, the strong response would also be there, and he meant it, proved it.

It was the need of the hour. It is difficult to estimate how many lives he saved by simply becoming a protective shield for the oppressed and the usual targets.

If he believed in some cause, his commitment to it was pure hundred percent. He owned up the Ayodhya action, he congratulated openly those who did it, he never minced words and never said, ‘I dunno what happened, who did it, I was not there, I am sorry,’ and all that. He said he was proud to see whatever happened. His candour won him friends even amongst those who opposed him.

He shredded to smithereens the very notion of being politically correct. Correct was what he said and the political drill had to be mended accordingly. He meant that political correctness was an alibi for backdoor compromises and ditching what you always believed in.

For a hardened secularised section he stood as the fundamentalist, an unforgiving and uncompromising leader who built his empire on parochialism and hate for the minorities. That is the usual line of attack against him. He cared a hoot for this. People forget that India has a tribe known as seculars who have an intense hatred for anything Hindu.

Balasaheb rose not only to provide a much needed shield and force for persecuted Hindus under attack from fundamentalist Islamists, but also rekindled a sense of pride amongst the Marathi Manoos. Like a human being, a society and a nation too possess a soul and a body.

In Maharashtra [ Images ], under the influence of Congress-led sham secular policies the quintessential character of the land of the Marathas became diluted and blurred. His movement brought the fragrance of the land to the fore.

The parting of Raj Thackeray definitely jolted him. It was an unexpected blow from within. The earlier inner revolts had never bothered him so much. People felt he still hoped for a solution to retrieve lost ground.

The way Mumbai was brought to a halt during his illness showed his immense popularity, cutting across all fault lines, barriers, sectarian circles and political rivalries.

It is difficult to imagine such a phenomenon anywhere else. From being a cartoonist to becoming an agenda personified, outshining everyone else, is the unique distinction that Balasaheb created. A trailblazer indeed.

Tarun Vijay, MP, is a member of the Parliamentary Standing Committee on External Affairs and National Spokesperson, Bharatiya Janata Party. 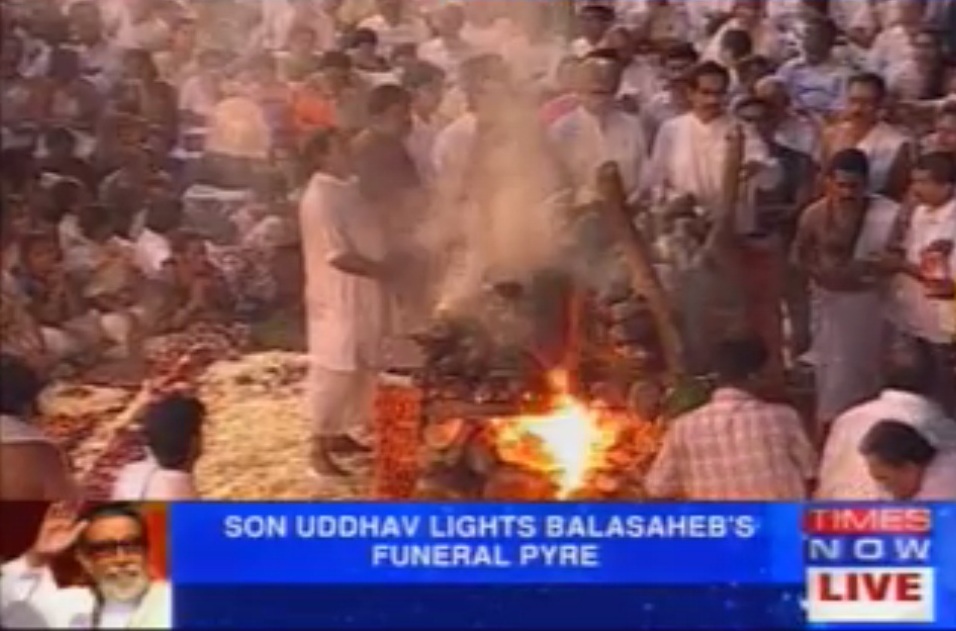