Note: This piece is the translation of  Sri Pratap Simha’s oped in Kannada, which appeared in Kannada Prabha on August 4, 2012. The picture used here is a screen (below) clipping from the original graphic used in Kannada Prabha. Comments and criticism welcome. (Translated by Sri Sandeep, New Delhi) Signs of such a possibility appeared on Thursday itself. Prominent Team Anna member Prashant Bhushan, and Anupam Kher—who has of late emerged as an extremely staunch Anna-supporter—gave out these signs which were broadcast on various TV channels. While Prashant Bhushan reasoned that since pressure tactics haven’t worked, we have no other option except active politics, Anupam Kher justified Team Anna’s newfound political ambition thus: even leaders like Jawaharlal Nehru, Maulana Azad, and Sardar Patel were activists like us before they became political leaders. News channels dished out discussion shows with pre-emptive titles like Will a Fourth Front Emerge?

And then, quick on the back of such speculations came forth the official announcement of forming a new “party.”

What goal does Arvind Kejriwal hope to accomplish after making such an announcement? Anna Hazare is certainly naive, he has genuine concern for the nation’s well-being. However, is this applicable to the members of his team? Is there any honesty in their goals? They began a mass agitation ostensibly aimed at eradicating corruption. They claimed that the intent was to wrangle out a strong Lokpal legislation using pressure tactics. However, why did they abandon this hoary goal midway and opt for donning the khadi and doing active politics?  What was the motive for this? Given this, doesn’t Subramanian Swamy’s remark that Team Anna has made a fool out of Anna make sense? Who were among the first to express extreme happiness when news broke that Team Anna wanted to go political? Switch on the TV and check out the footage that shows the triumphant smiles of Kapil Sibal, Digvijaya Singh and Ambika Soni! What is the calculation behind their statements welcoming Anna Hazare’s entry into politics?

However that maybe, who stands to gain the most if Anna Hazare forms a political party?

Till yesterday, the same Digvijaya Singh and Kapil Sibal had gone on a rampage criticizing Team Anna. They spared no opportunity to both vilify Team Anna in the vilest terms. And now, these very people have done a U-turn almost overnight. They’re suddenly sweetness personified. Indeed, Digvijay Singh has gone a step forward and suggested that Team Anna join forces with Baba Ramdev and enter the political arena. Why? Consider this: whose votes will be directly impacted by Team Anna’s new party? Anti-Congress votes, obviously. And who benefits most if anti-Congress votes are split? Sonia Gandhi, obviously. If that’s the case, which party does Team Anna hope to bring back to power in 2014? In the same breath that Team Anna talks about eradicating corruption, Team Anna also intends to indirectly,electorally help the same corrupt Congress return to power.

Realistically, the ones who talk loudest about corruption are not the rich or the poor class. It is the urban and working middle class, which is most affected by corruption. It is this class that came out in support of Anna Hazare’s agitation in overwhelming numbers. Now, which party has the middle class traditionally voted for? The middle class has always remained steadfastly anti-Congress. In the past, it used to be pro-Jana Sangh. Then it switched its loyalty to the BJP, which replaced the Jana Sangh. What this means is that if Team Anna’s new party has its sights on any votes, it’s most definitely that of anti-Congress votes.

Assuming that Team Anna’s new party manages to get even one or two percent of the vote, here’s the kind of danger it entails.

In the 1998 general elections, the Congress managed to secure 25.82% of the vote and ended up with a tally of 141 seats. However, the BJP, which secured 25.50% ended up winning a whopping 182 seats. The reason? The Congress party contested alone in all the constituencies whereas the BJP contested only in those places where it knew it was strong. It gave up the rest of the seats for its allies to contest. In 2009, the Congress adopted this same winning strategy and romped home with an impressive 206 seats. When such minute and extremely subtle calculations are involved, it is crystal clear that Team Anna’s strategy of breaking up anti-Congress votes is done with a view to help the Congress party. If that wasn’t the case, why would Sibal and Digvijaya Singh flash their exultant smiles? Such exultation especially in face of the middle class, which is waiting to teach the Congress a solid lesson at the polls because the Congress’ venomous economic policies are solely responsible for the on-going middle class misery. But the Congress leaders are exulted because they know Team Anna’s vote-split will help them. Although a little late in the day, the BJP too, has welcomed Team Anna’s upcoming political adventure, if only to show that it’s not scared. However, it is undeniable that the BJP will have at least a pinprick of anxiety.

Isn’t Team Anna aware of all these implications? Are we to believe that they’re that naive to actuallybelieve that wielding the mike at Jantar Mantar and thundering valiantly against corruption is all it takes to instantly throw the corrupt UPA out of power? Even during a catastrophic event like the Emergency, all anti-Congress forces realized that even a sizeable number of parties couldn’t defeat the Congress beast, and that the only way out was to combine all the forces and fight as one entity. And then, even a pan-Indian movement like the Ayodhya movement fetched the BJP a paltry 89 seats. If these are the facts, if these are the historical precedents, there’s only one unmistakable conclusion that we can draw from Team Anna, which wants to eat into anti-Congress votes?

Also, who apart from Anna himself in Team Anna—which has declared that it’ll bring in change through the electoral route—has a clean record? Arvind Kejriwal? Kiran Bedi? Prashant and Shanti Bhushan? All these are educated, qualified, intelligent, and can articulate themselves well in English. However, what apart from these qualifications, are their qualities? What is their competence or the lack of it? What is their service to the society and nation? We don’t need to seek an answer for these questions because they’ve themselves demonstrated  the answer. Because they themselves accurately know their qualities and record, they piggybacked on Anna Hazare in a clever ploy to gain social acceptability. Examine each person in Team Anna on his/her own individual merit, separate from Anna—what do we get?

Are these worthies committed in their self-declared goal of fighting corruption? If they were truly committed, what was the necessity for disparaging the Gujarat Chief Minister Narendra Modi? What is the intent of Sanjay Singh who launched an unprovoked attack on Narendra Modi vilifying him as a “murderer of humanity?” Who that statement aim to please? Which party did Sanjay Singh want to mollify and why? How is a fasting-movement aimed at eradicating corruption related to the Gujarat riots that happened 10 years ago? What guarantee can Team Anna give that it won’t indulge in the politics of Muslim appeasement tomorrow?

Cut back to April 2011. Recall the dais on which Anna Hazare sat fasting. The dais was adorned with a huge picture of Bharat Mata holding the Bhagava flag. Alongside were pictures of Bhagat Singh, Subhash Bose, and Savarkar. Cut to the present fast. Bharat Mata was missing. And why was she missing? The reason is as simple as it is obvious: she was banished from the dais because Muslims objected to it. If the worthies of Team Anna can discard Bharat Mata herself because Muslims didn’t like it, we shudder to think about the levels they will descend to in future for the sake of votes. Recall how Chiranjeevi started Praja Rajyam to oppose Congress rule in Andhra Pradesh only to merge with it within two years. What is the assurance that Team Anna, which now vocally opposes the Congress, won’t be inspired by Chiranjeevi?

When Baba Ramdev sat on a protest meeting at Ram Lila Maidan, the UPA government unleashed police brutality on the gathering. However, it did nothing when Team Anna gathered at Jantar Mantar not once, but thrice! Why? Baba Ramdev’s close aide, Balakrishna now languishes in custody thanks to a non-bailable warrant issued against him. No similar “action” has been taken against any Team Anna member. Why?

Baba Ramdev is no less when compared to Anna Hazare in fighting against corruption. In fact, Baba Ramdev has relentlessly toured India for at least 10 years, instilling awareness and speaking out against these very same issues. In the initial days, Ramdev spoke out against the health problems caused by consuming carbonated drinks like Pepsi and Coke. Then he lashed out against how multinational companies are looting India. And then, he upped the ante by thundering against black money.

However, the difference between Baba Ramdev and Anna Hazare is the fact that Anna has a battery of English-speaking city slickers as disciples while Ramdev and his supporters are unpolished and speak only in Hindi. These Team Anna slickers first raised a huge din insisting on a strong Lokpal followed by an equally insistent demand for electoral reforms. Why then did these slickers abandon all this and announce their intent to form a political party? This eerily reminds us of V.P. Singh, the man who first bragged that “I’m the person who first brought the Bofors scandal to light!” and rode on that wave, as a mascot of clean politics, all the way to the Prime Minister’s chair. Once he became the PM, there’s no record of him having investigated the Bofors scandal.

Dear Team Anna: millions of voters of this nation might be illiterate but they aren’t fools. A large chunk of these illiterate millions defeated Manmohan Singh in South Delhi in 1999. Shiv Khera, author of the bestselling “You Can Win” lost his deposit when he contested. Similarly, Captain Gopinath (of Air Deccan fame) lost his deposit from South Bangalore in 2009. People like Shivaram Karanth and General Thimmayya met the same fate. When Imran Khan, buoyed by Pakistan’s cricket world cup victory, formed Tehreek E Insaf, he lost in all the six constituencies his party contested at.

Dear Anna: Salman Khurshid recently said that you confided in him at a secret meeting that beginning last July, none of your team members listen to you. Your erstwhile personal blogger, Raju Parulekar has narrated how Arvind Kejriwal and Kiran Bedi have virtually imprisoned you. Amidst all this, Subramanian Swamy has asked “if Anna cannot run Team Anna, then how can he run the country?” You might be aware of the proverb which goes thus: how can someone who doesn’t even know how to tie a horse, run a chariot? This apart, you claimed that you took your inspiration from Bharat Mata herself. Now, it’s proven that you have no control over your own team members who showed no compunction to throw Bharat Mata’s picture out. Aren’t people then justified to develop suspicions about the intentions and goals of your team members, Anna?

Dear Anna: you used to be a truck driver in the army. We all read news reports of how cleaners often drive trucks and cause deadly accidents. We sincerely hope your team members don’t form a new party to help the Congress, and thereby drive the nation into an abyss. Oh, by the way, your ideal, Mahatma Gandhi gave the reins of power to Nehru and became the first person to push the country into a ditch. 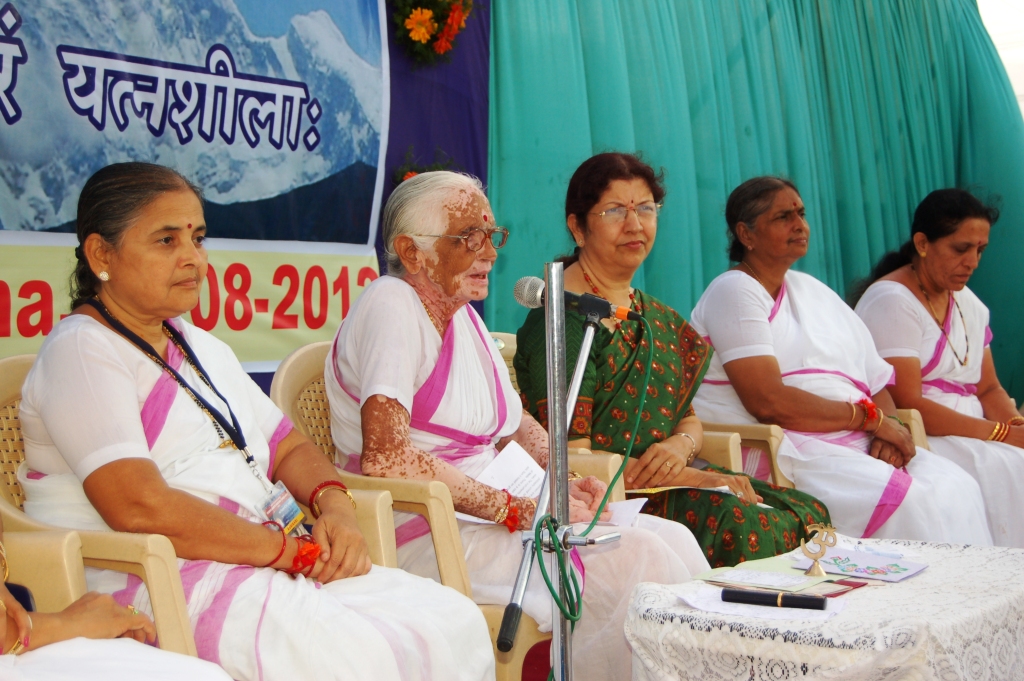