After Hon Supreme Court’s Slap to Union Govt on 4.5% Muslim Quota, Govt must withdraw the quota & apologize to Bharat

Further lambasting the Union Govt, Dr Pravin Togadia, International Working President of VHP said, ‘This is a severe blow to the Union govt & also to all other state govts who have been trying to appease Muslim vote bank by such special favours like quotas & reservations to Muslims by snatching the rights of real poor & needy OBCs, SCs, Tribals & from Open Merit.’

Tue Jun 12 , 2012
The RSS chief  was addressing a gathering of over 1,000 swayamsevaks (volunteers) who had completed their third-year course of the RSS, The Sangh Shiksha Varg, at the monthlong summer camp held here annually. Bhagwat said the RSS is engaged in uniting people on certain values of nationalism and ideals that would […] 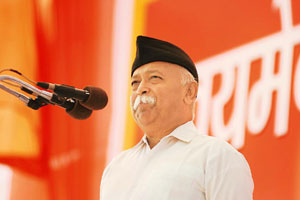