He was delivering key note address after inaugurating “A Symposium on Current Issues : A Dialogue with Media” jointly organised by The Mythic  Society and Gokhale Institute of Public Affairs in Bangalore.

“Factors like aspiration, expectation, disappointment and despondency can coexist in an individual. The last two being negative can affect the social health. Citizens Despondency destroys the character of the nation” said Dr Mitra.

“Media expected to stand up for the under-privileged. Media should for that group who has no voice or whose voice is unheard. Media should raise voice demanding good governance and to fight against corruption. Peace, brotherhood and democratic temperament is to be the priority of the media. It also has to uphold the value of patriotism” Dr Mitra added.

He quoted the role played by the media in Jessica Lal murder case in NewDelhi.

“It is unfortunate that separatists are given a priority by national media. Those who are anti-nationals, are openly using the platform provided by the media. Hence media shold think in this regard when the country of the enemy within” said Mitra, who also quoted the examples of British Media over  issues with its neighbor Ireland.

Media has to state whenever they publish any paid news as ‘paid’. Apart from crime, cricket, cinema there are various issues of national interest like environment etc on which media should focus upon, he added.

‘Corporate wolrd is the motive of corruption’

Speaking on “Beyond Lokpal: Perceptiveness for the people’s activism”, Dr Chandan Mitra said “Sooner or later the Lokpal bill will be passed with few modification from the present proposed form. CBI should come under Lokpal, meanwhile there should not be any duplication of responsibilities. Youth of India should be vigilant  in fight against corruption. Nearly 53 govt employees of India will come under Lokpal meanwhile Corruption in private organisation is also a matter of debate. In Japan the Prime Minister has to resign over charges of corruption, British MP’s facing the charges of corruption. In India the corporate world is the motive behind Corruption” .

Wed Apr 4 , 2012
TIRUMALA Andhra Pradesh April 4: Facing flak from various quarters, the executive board of the Tirumala Tirupati Devasthanams (TTD) has decided to cancel the categorization of VIP darshan tickets. In a major relief for common pilgrims, the TTDboard scrapped the three categories – top priority, priority and ordinary – for VIP darshan. The […] 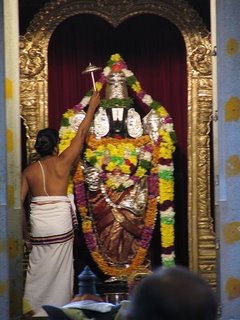