The Yatra routes in Maharashtra:

Began on August 9, 2012 from Kanyakumari of Tamilnadu, 65year old RSS Pracharak Sitaram Kedilaya lead Bharat Parikrama Yatra has been aimed at the upliftment of rural life in the villages of India. The Yatra which was launched in Kanyakumari on August 9, has now covered an approximate distance of 1300km.

'The Sangh is my Soul'; writes Atal Bihari Vajpayee, the First swayamsevak who became Prime Minister

Mon Dec 24 , 2012
by Sri Atal Bihari Vajpayee, The First RSS Swayamsevak to become the Prime Minister of India. I came in contact with the RSS in 1939 through Arya Kumar Sabha, a youth branch of Arya Samaj, in Gwalior-then a princely state which was not part of any province. I came from a […] 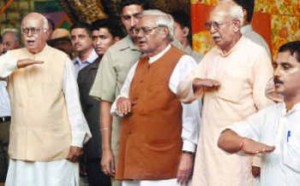