NAGPUR, Aug. 20: “Our society has forgotten the age old values, ethos and lifestyle that sustained it years together. Because of this we are witnessing the disintegration of our society into smaller fragments based on castes, language, etc. To reverse this trend it is necessary to restore and reinstate that same lifestyle, values and ethos so that the society stands united and strong to make our nation great once again. This is the mission of Rashtra Sevika Samiti”, observed Vandaneeya Shantakka, the new Pramukh Sanchalika of Samiti here on Monday.

In her maiden address as Pramukh Sanchalika of Rashtra Sevika Samiti- the largest nationwide organization of the Hindu women—Shantakka exhorted the ‘Sevikas’ to devote themselves in fulfilling the mission of the Samiti by creating goodwill, harmony and understanding among the members of the society.

Underlining the express need of the mission of Samiti the new leader said that creating harmony has been the Hindu way of life and only the Hindus can understand the importance of this mission. To create such a goodwill and purity of mind in the entire world was the mission of the Samiti.
Describing the present state of Hindu society she said that it was a common observation that the society was disintegrating for petty differences and the fire of disintegration were stoked by those who wanted to destroy ‘Bharat’. “We have also forgotten our fundamental life style due to this excessive propagandist approach adopted by them. Hence our mission is to reverse this trend and restore our fundamental lifestyle which gave more importance to the inner beauty than the beauty of the body”, she explained.

Giving example of Indra Nooyi, CEO of Pepsico the Samiti Chief said that women like her did not forget her Indian roots and carried with her the message of India wherever she went. It was necessary to create self-respect for our culture, traditions by presenting examples like Indira Nooyi and Jamshetji Tata before the young generation. This is our ‘Rashtradharma’ (National Duty).
“The country is passing through a very critical stage at present. This calls for dedicating ourselves for the sake of our ‘Rashtradharma’. Hence, the Samiti has adopted the theme “Rashtradharma Pravartanaya sankalpitah vayam”, she said.
Earlier, Vandaneeya Pramilatai Medhe, who handed over the reins of Samiti to Shantakka, said in her parting speech that the work of Samiti was like a continuously flowing stream. Change in leadership did not affect the course of our work. This change was also a part of our organizational system conducted very smoothly.

Referring to the importance of the day she said that this change was effected on ‘Sadbhavana Day’. This ‘sadbhavana’ was the basis of our work of reaching out to the society. Referring to Shantakka’s mathematics background she exuded confidence that under her leadership the samiti would progress by performing the suitable calculations.
Stating that Hindutva was under constant attacks from forces inimical to it under a well planned conspiracy. The efforts were on to disconnect the young generation from this core principle of our society. In such a situation it was imperative on our part to accelerate the pace of our work to make the Hindu society strong, self-respecting and harmonious.
Annadanam Seetha, who was elevated to the post of Pramukh Karyawahika in her brief but emotionally surcharged address expressed hope and confidence to take the Samiti work to new heights with the help and cooperation of all the senior and junior ‘Sevikas’.

A Guard of honor was presented to the new Pramukh Sanchalika with ‘Sevikas’ in uniform at a solemn function held at Devi Ahalya Mandir here this evening.

Tue Aug 21 , 2012
VHP Press Release, New Delhi by Dr Pravin Togadia, International Working President, VHP   For the last around one month, Assam is burning. The heat has reached all states in Bharat. In Assam & in Bharat around 5,00,000 North Eastern Indians are displaced – Some in violence in Assam & some […] 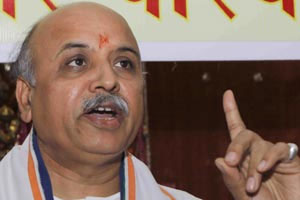