Bangalore September 25: “Deendayal was a great visionary of last century, a person par excellence. His concepts of Integral humanism, his thoughts on life and values of social discipline are still finds a significant place as India needs such a way of resurgence based on Dharma as proposed by Pandit Deendayal Upadhyaya” said RSS Kshethreeya Boudhik Pramuk V Nagaraj at Bangalore this evening.

He was addressing a select audience in an Intellectual Meet (Boudhik Varg) to commemorate 96th birthday of great Jansangh Leader Pandit Deendayal Upadhyaya. The event was organised by RSS Bangalore Unit at Rashtrotthana Parishat, Bangalore. RSS Pranth Karyavah N Tippeswamy was on the dais.

” As an RSS Pracharak, Deendayalji acquired all characters needed for a social workers. His deep insights on India’s socio-political challenges were well narratred in his book Political Diary. When Jansangh was born in 1951. as per the then Sarasanghachalak of RSS Guruji Golwalkar’s wish, Deendayalji joined Jansangh. In the political arena, Deendayalji firmly believed and said to all that ‘winning an election should not be the only agenda before a party. If a party is committed to the basic ideology, if party activists are morally correct and never compromised with honesty, then even if there is a loose in an election, its never a matter of concern’. Deendayalji’s message gains a serious note at present, looking at the present status of political activism by parties and their cadres in India” said V Nagaraj.

‘Deendayalji himself got defeated in an election, but he never compromised for the values to be maintained in Politics and Sangh’s Ideology in Political upliftment of India’, reminded V Nagaraj.

“During 1960’s the men in central cabinet followed Western economic model of development, the key persons running the government attracted towards Communism and its subsidiary theories, Deendayalji proposed development based on Dharma and Integral Humanism. His thoughts were expressing his deep insights on economics of India and abroad. Deendayalji explained the way of life by a common man, the need of life as an individual, his commitment to the society and nation, the discipline which a common man should essentially follow and other co-aspects by which a strong nation will be built, utilising the self/domestic  sources of a country. Deendayal’s message was simple and clear. Countrymen should be morally of high standard, never compromising with justice and truth. If an individual truely follows this, Deeendayalji said, its otherway known as Dharma” , said V Nagaraj.

“The western world emphasizes Physical and mental pleasure through  development using all possible resources. Capitalism sees Man as an economic animal. Communism has twisted Darwin’s principle of Survival of Fit to survival of Fittest. Darwain proposed for natural selection of those species who could reproductively fit. But his concepts on environment was misinterpreted in social laws. Through narrow concepts of this kind, there was struggle among populations of the world. But it is the Indian way of development based on Dharma has the answers for all present social crisis. Indian system teaches how to live rising above materialistic approach. Dharma not refers to mere practice of rituals, it is more of values and understanding the concepts to acheive global peace through reforms in all sectors including economics and politics” said Nagaraj.

“Vyashti (Individuality), Samashti (thinking of well-being state of a society), Srushti (nature) and Parameshti (the ultimate Power of creator), are the four different factors mutually related through a specific bond of harmony(samarasya). Every biotic and abiotic objects share and possess similar form of energy. From vedic period till the modern scientists like JC Bose, India believed in this simple principle, everyone is made of same energy internally. Hence everyone in this nature enjoys a free and independent life. Our belief if not exploaitation, but it is just like milking a cow (Dohana)” said V Nagaraj

When the world is leaning to an expected clash of civilizations or supposed third world war, only the India has answer. Dharma is the only concept which has all solutions. (Dharma cannot be equated by religion, it has no parallel word, said Deendayalji while explaining Dharma). What we need is the sense of moral order and spiritualism, ethical compass. Otherwise we are heading to an disaster” alarmedV Nagaraj.

Thu Sep 27 , 2012
Mysore September 26: “Standing tall to the morals and principles, Sudarshanji was a rare personality to whom RSS will ever remember for his Intellectual contributions to the organisation. His life and message is a guiding force to all Swayamsevaks. He showed the right path for a social worker how to be […] 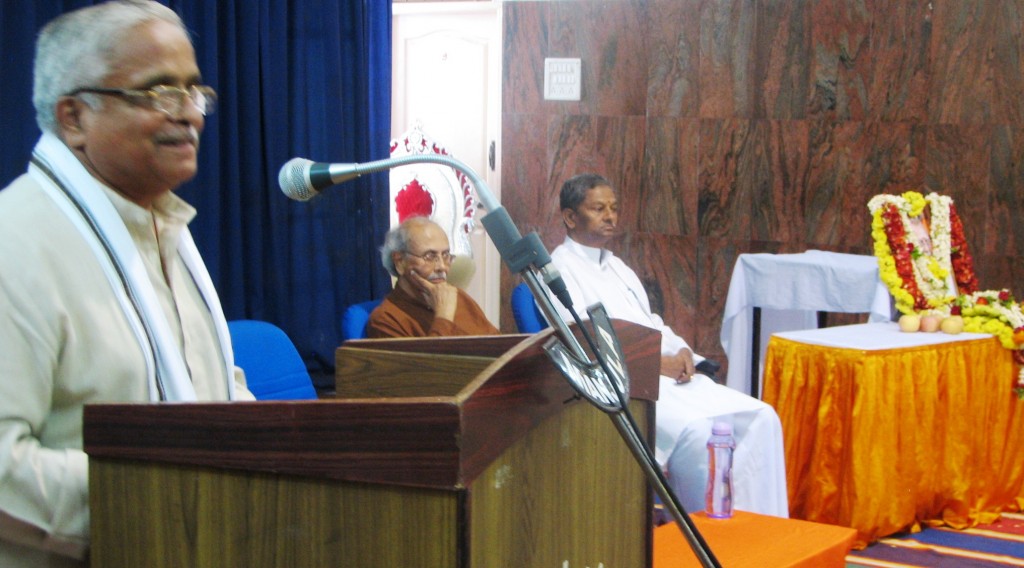