The Hon Supreme Court said, “The Govt’s decision to implement 4.5% sub-quota from January this year did not prima facie appear to be supported by constitutional provisions… The December 22, 2011 office memorandum on the issue of sub-quota did not have the legislative support. Unlike the 27% to OBCs in central education institutions, the carving of 4.5% sub-quota is not supported by even a law. It also appears that the carving of 4.5% sub-quota was purely based on religious considerations. We are not inclined to grant stay.” The Hon Supreme Court also specifically asked the Govt, ”You are giving them from 50%, you are giving them already from 27% OBC & now you want to give them specially 4.5% exclusive. Why this religion based discrimination?” Govt had no reply to such a direct question on triple reservation to Muslims.

Dr Togadia further demanded an unconditional & immediate apology from the Union Govt & from all the state Govts who gave any reservations or special favours to Muslims. He also demanded that the Govt now immediately withdraw reports of Sachhar Committee & Rangnath Mishr Commission as the Hon Supreme Court has already rejected them & Delhi HC had termed them unconstitutional.”

Dr Togadia warned, “Rather than giving up the unlawful, unconstitutional & discriminatory efforts of giving special reservations & other favours to Muslims now, if the Govt goes ahead with the vicious anti-national plan to amend the Constitution to yet give such reservations & favours to Muslims, then Bharat’s Hindus of all castes will protest as ONE democratically on the streets. All responsibility of any ensuing situation thereafter will be the sole liability of the Union Govt.”

Dr Togadia appealed to all in Bharat to challenge in the respective courts all such special reservations & favours showered on Muslims in any form anywhere in Bharat in all states including special salary of Rs 2500 to Imams in Bengal; quota to Muslims in Tamil Nadu, Karnatak, Bengal etc; fees paid by Govt of 72,09,000 Muslim students; monthly Ru 12,000 scholarship to 32,145 Muslim students (total Ru 700 Crore); educational loans to Muslims at 3% & many other favours given through NMDC (National Minority Development Corporation); Rs 1, 43, 396 Crore loan to Muslims for businesses at the rate of 6% interest in priority sector lending per RBI circular while 13% interest levied on Hindus etc. Dr Togadia appealed all to write letters / emails to the PM, the Hon Supreme Court & the UN Human Rights against all such unconstitutional, anti-law & discriminatory favors & reservations given to Muslims.

Recently the Govt has sent a letter to all state Govts asking them to appoint Muslim Police Inspectors in Muslim areas. This also is an unconstitutional decision & must be challenged as this is a prelude to the Targeted Violence Bill that the Govt has been proposing for pushing Hindus to jail while protecting Muslim violence against all others.

Dr Togadia also demanded that the Hon Election Commission now must cancel registrations of all political parties that fought or won the elections promising any type of Muslim quota / reservations / special favours. The EC should also bar from such candidates from further elections.

Some significant points on Muslim Reservations by Dr Togadia 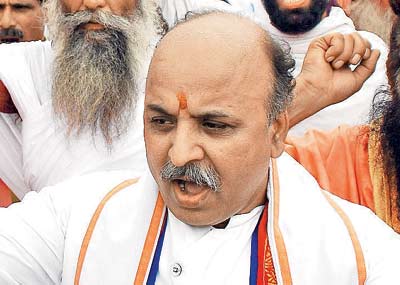