New Delhi, August 24, 2012: Taking a jibe on Govt for an order by Telecom Dept to Internet Service Providers to BLOCK selected Twitter accounts & other web pages, VHP International Working President Dr Pravin Togadia said, “From media I came to know about such a draconian order for BLOCKING Twitter accounts of Sangh Pariwar, Sangh’s magazine Panchjanya, Dr Pravin Togadia, a few veteran journalists & others holding all these responsible for alleged Assam violence! It is like trying to give Metacin Tablet for Cancer instead of treating actual Cancer! Govt is purposely neither BLOCKING Bangla Deshi Infiltrators, nor properly punishing their local supporters who were seen attacking even the police in Mumbai. 3 Crore (30 Million) Bangla Deshi Muslim Infiltrators are spread in various states of Bharat, killing Assam’s original Tribes / Hindus & other Non-Muslims as well as terrorizing Indian citizens including Police & also causing Mass Exodus of North Eastern Indians. But for vote bank, Govt has been protecting them & BLOCKING expression of other citizens of Bharat.”

Dr Togadia asked, “Where was Twitter in 1990 Kashmir Ethnic Cleansing of Hindus? Where was Twitter & internet in 1947 when during partition 1 Million people were killed & 10 Million were displaced? Where was Twitter during emergency in 1975? Inability of handling the real issue of Bangla Deshi Infiltration due to vote greed is a serious threat to Bharat’s safety & security. Terming common people’s sentiments & expressions on internet as ‘Hate Speech’ the leaders of the political parties that benefit from such ‘imported’ vote bank are giving Love Speeches about their Human Rights when Lakhs of Tribals are displaced in Assam & in other states.”

Bharat is used to such illegal Gag orders time to time. In emergency, it was on papers; now it is on Mobile SMSs, Internet etc. It will soon spread to all other media. This is typical of inefficient Govts to blame others for own incompetency. Bharat knows how to handle such ‘Twitter Handle Blocks’ democratically. We condemn this unconstitutional tyranny by the Govt & considering legal options against it.

Sat Aug 25 , 2012
Kothaangalam KERALA: The workers of RSS Sevabharati have became the paradigm of relentless service by working shoulder to shoulder with police and fire force officials, tirelessly and non-stop for 3 days. The workers were unified by a single thought: The RSS workers joined hands with rescue forces in their search […] 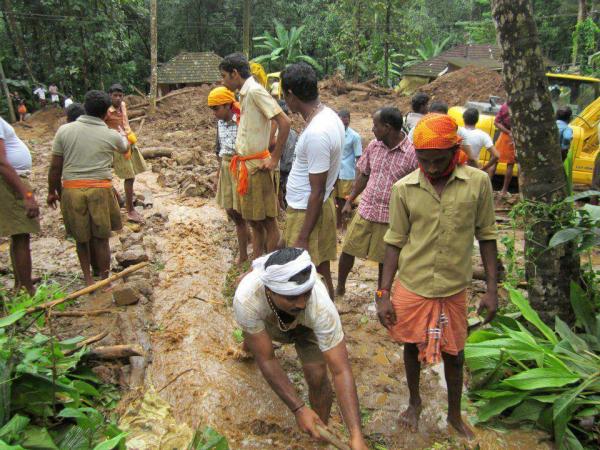