Bangalore Feb 14: First politician to ban system of carrying faeces in Karnataka (ಮಲ ಹೊರುವ ಪದ್ದತಿ), Dr VS Acharya expires in Bangalore today. Dr Acharya headed the  First elected body by Jansangh in South India, the Udupi Municipality in 1968, after 40 years in 2008, BJP came to power. Dr Acharya brought several youngsters to Jansangh, BJP who reached different top positions in the party. Dr Acharya was a rare politician with highest committment for Dalits, OBCs and poor. He was the first man to ban the system of carrying faeces in Karnataka.

Dr. Vedavyas Srinivas Acharya was a senior BJP leader of Karnataka state. He was the Higher education Minister in the Government of Karnataka Formerly he had served as minister of medical education and animal husbandry in the BJP-JDS coalition government.

He is a native of Udupi and a physician by profession. His father was Katte Vyasa Acharya, a Sanskrit scholar. He started his political career in the erstwhileBharatiya Jana Sangh (predecessor of Bharatiya Janata Party). He has been a member of legislative council (M.L.C) of Karnataka state since 2002. Tue Feb 14 , 2012
Thiruvananthapuram, Feb 14 (PTI) :RSS Sarsanghchalak Mohan Bhagwat today visited Matha Amruthanandamayi Mutt  and the famed Sivagiri Mutt at Varkala near here, founded by saint-reformer Sree Narayana Guru. Bhagwat was received by the head of the Mutt Swamy Rithambharananda and other sanyasins.   He offered floral tribute at the ‘samadhi’ of the […] 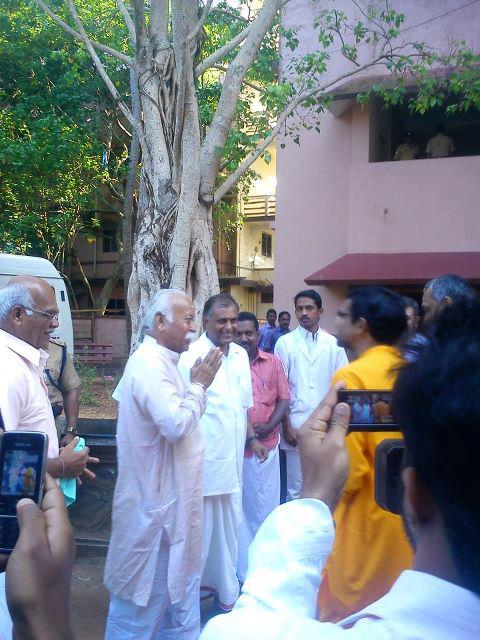