Haridwar March4: The Fourth International Conference of the Elders of Ancient Tradition is being held at Deva Sanskrithi Viswa Vidyalaya (DSVV) of Haridwar. The event is witnessing a vibrant congregation of 14 of the world’s oldest cultures and religions. The programme jointly organized by International Centre for Cultural Studies (ICCS) and DSVV. Around 340 delegates from 30 nations like Ghana, Hungary, Canada, New Zealand, Japan, Nepal are attending the meet.

At the inaugural held on 3 Mrach, 2012 topics related to universality, humanity, peace and encompassing love were shared by all delegates as a part of sharing of ideas and thoughts. Following the inaugural welcome song, the session featured prayer recitals from various cultures and religions.

The function was inaugurated by Chancellor of  DSVV, Dr. Pranav pandya. “Inspite of the difference in language and culture, what binds everyone is the language of love. This language touches every heart and this language comes out in the form of expressions, “said Dr. Pranav Pandya,  observing that this is the first time that a world congregation of ancient cultures and religions have taken place in Haridwar.

“All the people who have gathered here are like colourful flowers of a single bouquet. Like each flower adding to the beauty and fragrance of the entire bouquet, every human being must contribute to the harnessing of peace and unity in the world. We must help in reconstructing the world that has begun to lose its rhythm because of constant attacks of terror and militant uprisings.”

“Citing the example of Swami Dayananda Saraswathi, Dr. Pandya said that the body must always be considered a gift from the Gods, of which we are managing trustees. Hence, being a divine gift, we must put it to use most fruitfully. Care must be given to our selves, according to the laws of nature,” he said, calling for deeper cooperation and coordination amongst every human being.

Many discussions and talks prevailed in the inaugural session, mainly focussed on the subject of unity in diversity. Speakers who addressed the audience spoke of a vision for the entire world based on equality and unity.

Vice Chancellor of Deva Sanskrithi Viswa Vidyalaya SD Sharma Dr. Chinmaya Pandya, Registrar  of the University Sandeep Kumar, International Organising Secretary of Viswa Hindu Parishad,  Dineshji- Rashtriya Swayamsevak Sangh Kshetra Pracharak of NW Zone, Mayor of Dehra Dun Vinod Chamoli etc were among those who were present inaugural session. Convenor of ICCS, Saumitra Gokhale , spoke of the necessity for a collective effort of all world cultures to unite and progress for betterment of humanity. The vote of thanks was delivered by convenor of ICCS, Europe Dr. Ram Vaidya.

Mon Mar 5 , 2012
The Kannada book “Maneye Maangalya” has been translated Hindi as “Mangal Bhavan Amangal Hari” released in Patna recently. Sri Su. Ramamma, Kutumba Prabhodhan Pramukh addressed during the ceremony. Patna: “The country is getting prosper day-by-day but at the same time it is reducing the family samskars. The Pariwar Prabodhan is […] 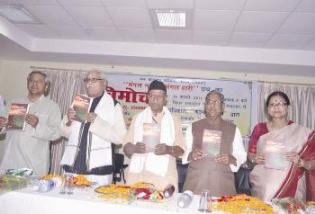