People of Bhaarat Do NOT Trust Governments about War on Terror: Dr. Pravin Togadia

New Delhi, May 5, 2012: Union Government & various state governments have been meeting & debating NCTC – National Counter Terrorism Centre past few months. Union Govt’s new brain child NCTC is being opposed by around 12 states because they see & rightly so, NCTC as Center’s intrusion on their federal rights of investigation, arrests in their own states.

Ridiculing the entire exercise of NCTC, VHP’s International Working President Dr Pravin Togadia said, ‘People of Bhaarat have been watching in anger & shock the heated debates on this that focus on rights of the Union & state Govts and NOWHERE any focus on the real safety & security of Bhaarat & Bhaarat’s people! Even if one does not go in the long history, all know that in 1947 during partition of Bhaarat while making of Pakistan, the cruel genocide of Hindus that was done under ‘direct action’ was the real form of Jehadi Terror in modern times. Since then now for 65 years, Bhaarat suffered various Jehadi terror attacks in almost all parts of Bhaarat. We are not even referring to the 1000 years of Jehadi attacks on Bhaarat time to time. Some terrorists went back that time from where they came & some stayed back – now attacking Bhaarat from within.

Governments are not serious about truly finishing Jehadi terrorism from Bhaarat. Recently Union Govt brought in N.I.A. National Investigating Agency claiming that the prevailing criminal law is not enough to handle Terrorism. NIA focused on putting Hindu Sadhus, saints, old Hindu people, women, and youth in jail while Jehadi terrorists roamed around freely resulting into the horrible Jehadi attack on Bhaarat that was Mumbai 26/11 & thenDelhi& again Mumbai! Even after that, the Governments were hiding the fact from the world & Bhaarat that while Jehadis came fromPakistan, they could not have been successful unless they had concrete local help. Rather than punishing the only alive Jehadi that time & also destroying the local Jehadi terror modules, Govt gave Most Favored Nation status to Pak, opened Bhaarat for Pak FDI & for Pak banks & never busted local Jehadi Terror modules.

FromKashmirto Assam Bhaarat’s Army has been fighting against Jehadi terrorism daily. Thousands of army & police brave hearts are killed. But instead of giving them justice & powers to control terrorism there, Govt has been sending Army & Police to jail in encounter cases. From Chattisgadh to Odisha, Governments know exactly which ISI supported Jehadi outfits have been helping Maoists & Naxals, which church has been their shelter etc. From Keral’s Marad toAssam, Malda to Bhatkal in Karnatak & from Andhra to Bhivandi in Maharashtra & from Godhra inGujaratto Madhubani in Bihar & Azamgad in Uttar Pradesh and many other such places, all know that there have been Jehadi Terrorism support systems well set there. But for the greed of power in state & in centre to appease minority voters, these modules are never busted.

In such situation, any new move like NIA or NCTC or any new law agency by any government – Union or any state – is a mockery of the term ‘War on Terror’. The truth that the public of Bhaarat knows is that NO government is serious about war on terror. All are busy in grabbing as much power as possible in any which way possible.

There is no Govt intention to really counter terror & this is evident in total inaction of theUnion& many state governments purposely not destroying local Jehadi Terror modules known to all law enforcement agencies. Unless this happens in a systematic way with complete political will to protect Bhaarat, Bhaarat will never trust any government on the issue of War on Terror.

We demand that all governments should now stop creating newer & newer creative paper ideas like NIA, NCTC, Targeted Violence Bill or any such goodie goodie programmes created to gobble up money, appease minority vote banks by sending Hindus to jail & thereby divert Bhaarat’s attention from Jehadi Terrorism, Naxalism, rising prices & corruption.  People are wise enough to see through this game & if there is any Jehadi terror attack in Bhaarat anywhere, the people will blame Union & the concerned state Govt both for not taking proper preventive steps to true war on terror. Therefore as a first step to create some basic credibility, the Union Govt & the state govts should lock all Madarsas that preach Jehad. Union Govt should immediately sever all ties with Pak. Let us see how many governments really do it. Until then Bhaarat’s people do not trust any Govt in War on Terror.

Sun May 6 , 2012
Antalya, Turkey: May 5 2012: India`s Olympic prospect Deepika Kumari won her first World Cup individual recurve gold medal today at Antalya, Turkey. She beat Korea`s Lee Sung Jin by six set points to four in the final of the Stage 2 of the championship. According to information, teenager Deepika won […] 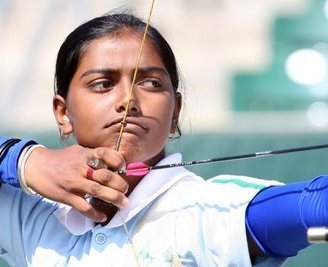