Tension prevails in Meepuguri of Kasaragod, Kerala on Saturday following defilement of a temple by unidentified persons. District administration has clamped prohibitory orders in the Kasaragod Taluk limits for a week. On Saturday morning it came to light that a group had desecrated Shree Durga Parameshwari Kshethra in Meepuguri. Three vehicles set on fire and six people have injured in the clashes. A few houses in the Choori locality came under stone pelting by miscreants as police carried out preventive arrests since last night. Roads towards the temple town of Madhur was blocked following a day long hartal in the village after the place of worship was defiled in the wee hours on Saturday. Additional police forces, requisitioned form Kozhikode and Kannur districts have been deployed in vulnerable areas as the personnel are carrying out intensive patrolling in the sensitive localities.

People are barred from assembling in group, carrying arms, or holding rallies in the town and adjoining areas falling under the taluk limits, a senior police official here said. People have been prohibited from riding in motorbikes after 8 PM in the nioght.

Mon Feb 13 , 2012
RSS Chief Mohan Bhagwat addressed a huge gathering of Swayamsevaks in Nagerkoil of Kanyakumari, Tamilnadu today. The event was held as part of 150th year of birth centenary of Swamy Vivekananda. Addressing the swayamsevaks, Mohan ji said that mere a celebration of Swamyji’s birth year is not sufficient, real remembrance […] 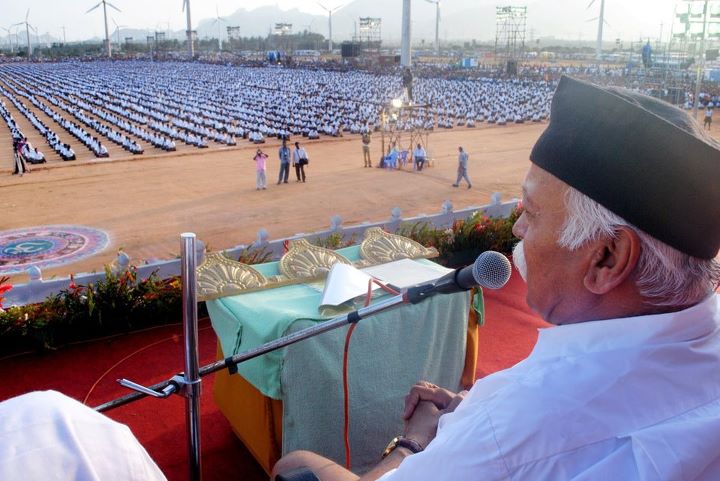