NewDelhi: RSS Akhil Bharatiya Sah Sampark Pramukh Ram Madhav said that “Hindutva is the “true synonym” for secularism and is liberal as it embraces all other religions”, said  in Delhi today.

He was clarifying the comments made by RSS Sarasanghachalak Mohan Bhagwat over the debate related to secular leader. “To portray Hindutva as anti-secular is not correct and narrow minded. Hindutva is the true synonym for secularism. We have always felt that Hindutva is the ideological anchor of RSS and it is liberal, all embracing and a secular idea,” he told reporters.

Ram Madhav said that what its chief Mohan Bhagwat said while addressing its swayamsevaks should not be viewed in the context of the present political situation in the country.

“It is uncalled for to link his view to day-to-day happenings on the political front and statements of certain leaders,” Madhav said.

Without naming Nitish Kumar for terming Hindutva as not being secular, Madhav said everyone has the right to put forth their views in democracy, but maintained that secularism and Hindutva are not opposed to each other.

To view the video of Ram Madhav’s statement please click: 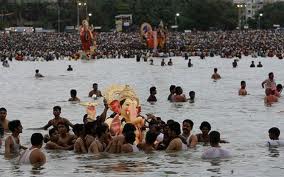