Dr.Krishna Gopal, holds the responsibility of Sah Sarakaryavah of RSS.  Dr Krishna Gopal did his Masters Studies in Environmental science from Agra University and secured his doctorate from Council of Scientific and Industrial Research. He has served as ‘Kshethreeya Pracharak’ in Assam and Mizoram for 9 years. He hails from Mathura of Utthara Pradesh.

A minister from Britain, while on a recent visit to India, remarked that when India got Independence they had predicted that the country would disintegrate in a short time but even after 60+ years India has remained as one country and our prediction has been proved wrong. Similar predictions were made world over when India got its independence. This is because they viewed us based on their own civilizational experiences and were proven wrong. They could not fathom the diversity of our nation. No other nation in the world has more than one primary language. No nation in the world has survived as one country with multiple religions. So when they see India from outside, they see hundreds of languages and several religions in one country and think it is bound to disintegrate. Even within India there are hundreds of tribes, belief systems and faiths. So what is that which unites us all? What is that which does not allow us to disintegrate? That is ‘Hindutva’. Though the word ‘Hindu’ is not appropriate and not our creation, we shall use it for reference purpose only.

Ancient sages found that the ultimate truth is the ‘Parabrahman’ and everyone had the same understanding in our nation. They saw the same ‘Parabrahman’ everywhere, in everything and in everyone. People in ancient Bharat understood and lived by this principle. Though the relationship between oneself and the ‘Parabrahman’ has been discussed and debated, everyone had the understanding that we all are one and the same. ‘Ishavasyamidam sarvam’ from Ishavaysa Upanisha the is the truth with which everyone lived. We saw everyone as part of the same self and not separate. Even Krishna in the Gita says that he is in all. It was this philosophy that was followed by one and all.

Our forefathers believed in ‘Sarve Bhavantu Sukhinah’ and welfare of one and all, in-spite of the numerous attacks on us. Even today, when Pakistan and China has attacked us numerous times, we still say that we want welfare for all and do not exclude them. Our ancient Rishis found the universal truth which is ‘Ekam sat viprahabahudavadanti’, which said you can worship any god but that will lead you to the ultimate ‘Parabrahman’. Just like elsewhere in the country, Karnataka too has many ‘Mathas’, sects and belief systems but no one says only they should be happy. Every faith in India wants everyone to be happy and prosperous. Infact, many sects many not even have heard about ‘Ekam sat ….’, yet they believe in this truth. The Nagas and the Kukis do not try and convert each other. I have talked to more than 32 tribes and each believes in welfare of all. It was this philosophy that spread world over and people got influenced. While many came to experience us, many came to conquer and convert us to their faiths by violent means and by deceit. But most of them who lived here became a part of this nation and started to believe in welfare of all and forgot their intolerance. It was this land that made them such beings.

This nation is just like the ‘masala’ prepared by mixing many spices by grinding them to powder. Even atheists, who do not believe in god, and those who do not believe in ‘Parabrahman’ also have a place here.  But even such people believe in this ‘Motherland’ and her generosity and are thankful to her. We as sons of this land are indebted to our Mother. This was not just a slogan but a philosophy. Every tree, mountain, river became worthy of worship and was deemed divine. There are tribes here which worship the trees and ask for their permission before cutting them down. In Silchar, in Assam, people worship the tea plants and sing songs before going for harvest. But for us, it is not just this land but the whole earth which is divine. The philosophy of this land is ‘unity of all’ and not simply ‘unity in diversity’.

People came here to loot, to convert and to ransack temples. The Islamic invasion was the most violent period of our History. We lost to them as we had never seen such barbarity, intolerance and people blinded by religion. They believed that God resides in Heaven and did not believe in ‘God is in all’ as we did. People who opposed were killed. DaraShikoh was killed for revealing this truth. There was no space for debate and discussions in those religions. They converted people by force or by deceit. I once heard a little girl refuse to take ‘prasad’ at a temple because she was told that it belongs to the ‘shaitan’. What kind of faith is that which teaches little children such thoughts? Our philosophy only teaches tolerance for all faiths. It is this tolerance which the British MP could not understand. No doubt, SardarVallabBhaipatel united all the princely states but this philosophy, which is the under-current of this nation, had already unified us.

It is not possible that anyone in our country does not believe in ‘welfare of all’. Shankardeva in Assam or Guru Nanak in Punjab said the same thing. It is this philosophy or ‘Siddanta’ which is also known as ‘Hindutva’. RSS too believes in this philosophy and lives by it.

In the Question & Answer session Dr.Krishna Gopal touched upon the necessity of tackling the ills within our society so that plagues like conversion can be addressed. He stressed on the fact that the upper castes and the educated elite are equally responsible for the ill-treatment of the underprivileged and weaker sections. This is used by the Christian missionaries for converting them. He said that concerned people in the upper castes and the educated elite should join hands with the weaker sections of the society and take care of their needs and support them. He gave an example of a Swayamsevak who runs and hospital for the leprosy patients. He said that our philosophy is strong but we also need to address such social ills so that everyone accepts it.

He also said that a ‘shakha’ is the foundation of a Swayamsevaks character which helps him later in life. He said a Swayamsevak gets a direction and confidence in life through a ‘shakha’. He said that lakhs of people attend Shakas all over the country even while they are in college and in other professions.

Report by Prashant Vaidyaraj for VSK-Karnataka. 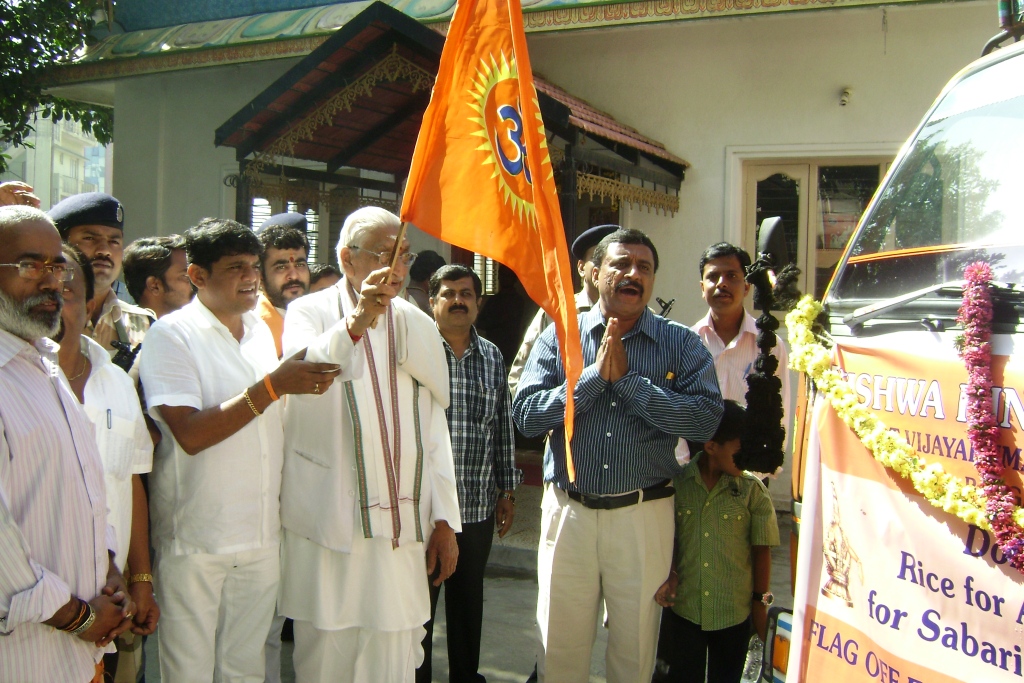