Bangalore February 26: “Every religion needs critical evaluation. Hinduism went through several reforms over the centuries and allowed all extremes to co-exist in India. There is a need of Indianisation of Indian Muslims and to rise above Fundamentalism” said noted political scientist Prof Rakesh Sinha in Bangalore.

He was delivering a talk on “Religious sensitivity and democratic freedom” organised by Rashtrotthana Research Foundation at Rashtrotthana Parishat Bangalore this morning.  The topic of the talk was in the background of Salman Rushdie controversy at Jaipur Literature Festival held recently.

“There were many attempts of religious reforms in Hindu society in last century. Ishwara Chandra Vidyasagar led a movement against widow marriage, MK Gandhi called for Harijan Yatra, Swami Dayananda Saraswati questioned the idol worshiping and campaigned through Arya Samaj. All these attempts of reforms were accepted by the Hindu society. Never these reformers banned or prosecuted in India. This is because Hinduism is such a way of life which gives all kinds of  freedom of expression” Dr Sinha added.

“Since birth Islam is subjected to Fundamentalism, it focuses upon a world view but doesn’t guide on social life. So many Fatwa’s declared on Muslim women working along men, Muslim women to wear jeans, Muslim women walking alone beyond 3km, so on. There will be clash of civilizations if fundamentalism persists.” said Dr S inha.

Dr Sinha als compared Controversial Painter MF Hussain over Salman Rushdie and said  “Both issues are on freedom of expression but are different at the level of perception. MF Hussain had an intention to hurt the sentiments of Hindus by his nude paintings on Lakshmi, Saraswati, Ganesha, Hanuman, Seeta. But in his paintings all Muslim Women were fully clothed. Why the nudity applicable for only Hindu Goddesses and why not Muslim women? Hence intention matters in freedom of expression. Paintings will result in Visual judgement where as books-articles will have a write-up judgement. The latter is subjected for Freedom of expression debate by intellectuals as books like ‘Satanic Verses‘  read by educated intellectual class only. MF Hussains intention was to disrespect Hindu Goddesses”

“In Islam, the political consciousness is guided by religion. The Social reforms are unfortunately based on political and electoral strength. Secularism and Hinduism are never two separate entities, they are co-related.”, said Rakesh Sinha.

Sun Feb 26 , 2012
Rourkela, Orissa (PTI):  The Vishwa Hindu Parishat, VHP on Friday claimed that over 3,000 people of 658 families from three states were reconverted to Hinduism at a function held in Sundargarh district. People from Odisha and neighbouring Jharkhand and Chhattishgarh congregated at Sundargarh town where the function, described by the […] 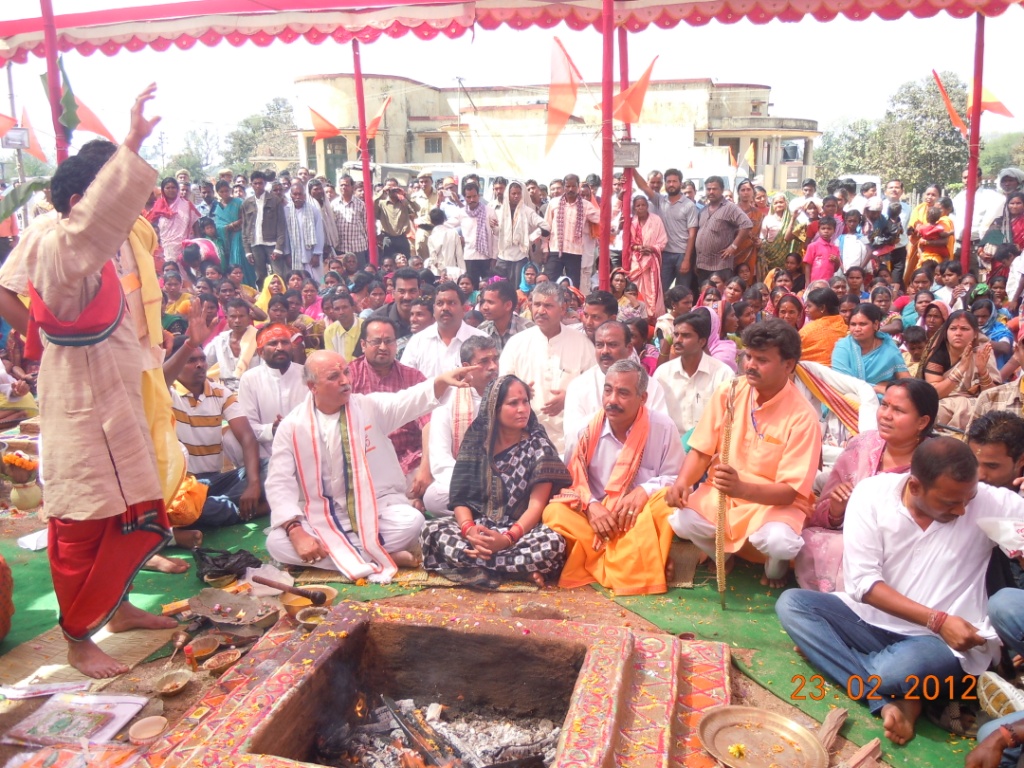