Rajkot April 17, 2012: RSS chief Mohan Bhagwat has said that terrorists can enter India easily because the country’s “border security policy” is not foolproof. Referring to the issue of shortages of weapons and ammunition, raised by the Army Chief V K Singh recently, Bhagwat said, “In spite of limited weapons, our army is strong enough and has won the difficult Kargil war. The success in the Kargil war has now become a “study-case” for analysts in many countries.”

Quoting Supreme Court’s directions to identify and deport illegal migrants, he said, “Due to our policy, our government has failed to find out those who are staying in the country illegally, while Naxalites are taking advantage of the government’s talk of peace.”

Countries such as Japan and Israel had progressed rapidly despite unfavourable conditions, he said, adding that Japan suffered two nuclear bomb attacks, while Israel had to fight a war soon after becoming independent. In comparison, India could not progress well enough, though circumstances were favourable, he said.

“Nation’s resurgence can be achieved only by re-establishment of Hindutva,”Bhagwat said.

Thu Apr 19 , 2012
NewDelhi: Mohd Abrar, the alleged Indian Mujahideen (IM) operative who was wanted for the 2008 Ahmedabad serial blasts, has reportedly told interrogators from the Maharashtra Police that Riyaz Bhatkal, alleged to be a top IM mastermind, had hatched a plot to kill RSS chief Mohan Bhagwat. The Maharashtra Police, according […] 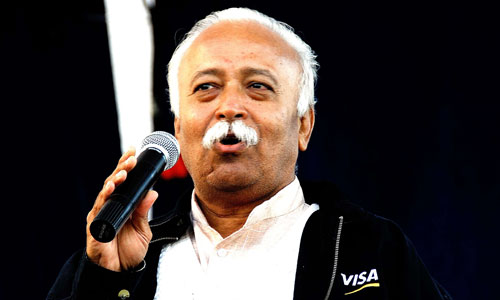