The numbers of people dying during the Amar Nath Yatra – 2012 in just 16 days (from 25 June to 14 July) has now touched 78.  This is a record which the authorities, conducting the yatra this year, will not be very proud of.  The main reason for this increase in mortality this year is because the yatra duration has been squeezed so drastically from the usual 60 days to just 39 days.  In short, the problem has arisen primarily because of a severe “queuing” problem.  Everyone knows that people feel more harassed whenever they face a longer queue for any service such as buying a railway ticket.  We would have seen it ourselves that if only 5-10 people be ahead of us in a queue, we’d  feel much more relaxed than if we had 100 or more ahead for the same service.

In Amarnath the situation becomes more complicated because this man-made “queuing problem” is to be suffered over 2 to 5 days, in high altitude areas, with heavy rains and extremely cold weather.  The rush also causes severe shortage of accommodation because the existing number of tents and huts can in no way cope with this sudden surge of people.  Ponies and other yatries continuously jostle and push other people, resulting in many falls and accidents on the narrower portion of the route.  People needing medical help sometimes avoid going to the doctors on duty simply because they see such a crowd at the existing health centres and fear losing a chance to have a darshan at Amarnath because of the increasing rush. This means that many “unfit” people prefer to continue with this arduous yatra than stopping and seeking medical help.  Similar is the pressure for clean drinking water, for food from langers, hot water, palkis,ponies, helicopter seats, toilets and so on and the shortage in all these sectors would be making the Amarnath Yatra very difficult in 2012.

The administration’s ostrich-like response has been to force the yatris to come with medical certificates! Now we all know that any such certificate can be bought or “managed” by greasing the palms of those manning the yatra registration counters. And what can medical certificates do when this year people in their 20s have died of cardiac arrest, including a presumably “acclimatized” Kashmiri porter and an Army jawan?

The stress should instead be on reducing the difficulty of the yatra which can first be done by increasing the duration of the yatra to a minimum of 60 days as was done earlier.  Secondly the roads have to be cleared and widened by the Shrine Board and not by the local PWD functionaries who just wait for the snows to melt and then raise bills for snow-clearing.  This will also enable the Shrine Board to run a Maruti Gypsy ambulance service on the Baltal route (for evacuating the seriously ill from the Holy Cave area during nights when helicopter rescue is not possible) for which devotees had already donated a few gypsies some 5 years back. 3rd, the helicopter services should be brought back to land in area away from Panchtarni, which is 6 km away, so that the old and “medically unfit” people benefit from this service, which was the main purpose for starting this facility.  Finally, the authorities need to pursue on war footing the proposal of installing a rope way for which the DPR was made and submitted by RITES some 6 years back.  This would eliminate the use of helicopters and ponies completely at least on the shorter Baltal route (as in Gulmarg), freeing the administration to focus on the longer Pahalgam route.

The target should be to reduce this unfortunate death rate.

Sun Jul 15 , 2012
Outlook, India’s one of the reputed national weekly has exposed the truth behind Churches in Kerala. Taking major references from 3 books published by 3 different persons of  Christian religious background,  the Outlook has carried the cover story. The books being “Amen: The Autobiography of a Nun” –autobiography by Sister Jesme, “Oru Vaidikante Hrudayamitha (The […] 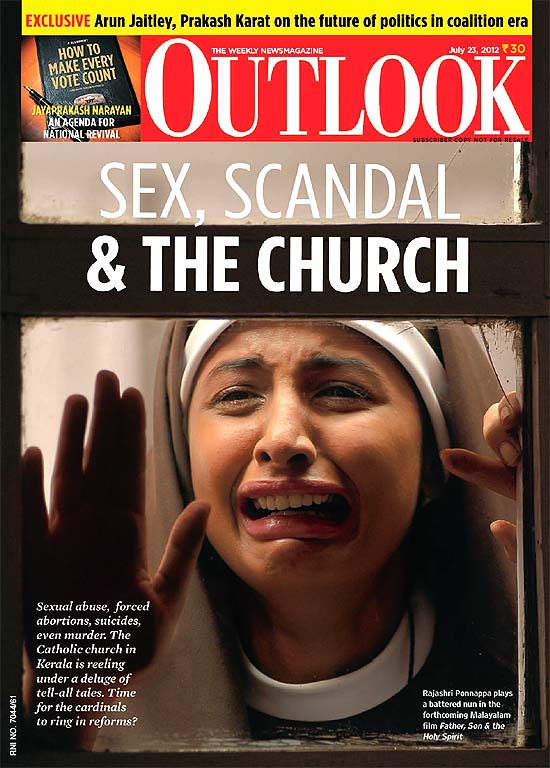