New Delhi: Organised by Centre for Security and Strategy, an International Conference on Pak-Occupied-Kashmir (POK) was held at New Delhi today. The Conference was inaugurated by Yashwant Sinha, former finance minister and delivered the key note address. Dr Chandan Mitra, MP and Editor of The Pioneer expressed his concerns on PoK and on Kashmir Imbroglio.

New Delhi: The Centre for Security and Strategy on Wednesday February 22, 2012 conducted an International conference on the prevailing conditions in the Pak Occupied Kashmir (POK) and northern regions of the state of Jammu and Kashmir.

Speaking in the inaugural session of the conference Shri Yashwant Sinha, former External Affairs Minister during the NDA regime, said the existing problems of Jammu and Kashmir result from the series of mistakes committed by the consecutive Congress regimes at New Delhi. Shri Sinha explained that taking the Kashmir issue to United Nations in January 1948 was country’s biggest mistake. He added that Pakistan always adopts an aggressive stance on the issue of Jammu and Kashmir and in any bilateral talk between the two nations Pakistan keeps Jammu and Kashmir as the central issue. Shri Sinha said that today Pakistan is trying to establish control over a major portion of Jammu and Kashmir in an unauthorized manner. This requires urgent intervention from us, yet we are not waking up to the emerging dangers. Sinha further added that Pakistan is ruling in the Northern regions of the state through proxy and in the sham garb of the Council.

“There is gross violation of human rights in the region and deep resentment exists in the youth due to rampant unemployment. There’s an urgent need to have nationwide protests to get back the complete state of Jammu and Kashmir and entire nation needs to be galvanized on this issue.  For long, Bharat has adopted a suave and polished approach to resolve the issue in a peaceful manner but the time has come for us to now adopt a harder line and take a belligerent approach to get back the Pak Occupied Kashmir and Northern regions of Gilgit-Baltistan,” said Shri Sinha.

Also present in the conference was Shri PC Dogra, former director general of police for Punjab. Shri Dogra said the presence of China in Northern regions of Jammu and Kashmir is a sign of gross danger for Bharat. The Gilgit-Baltistan regions of POK are regions of strategic importance. China has today built up the Karakoram highway and is trying to establish its supremacy in the Northern regions of Jammu and Kashmir. As per reports published in the New York Times there are around 7,000 to 10,000 Chinese soldiers in the region. In fact, apart from building roads China has also constructed around 22 tunnels in the region aimed at sourcing gas from Iran that could lead up to China.

Shri Suresh Prabhu, former Central minister said that the Gilgit-Blatistan regions have enough potential to generate around 15,000 mega watt of hydro electricity, which can bring tremendous prosperity for the region.  The area has enormous reserves of natural resources but Pakistan has virtually handed over everything to China, whereby China is using all these resources for its own consumption. Bharat should include these issues in the Indo-China border disputes as well, demanded Shri Prabhu.

Shri Mumtaz Khan, executive director of Canada’s International Centre for Peace and Democracy, said that the so called “Azad Kashmir” is actually controlled by the Pakistani Army.  By the 1974 Act, Kashmir Vidhansabha was constituted but all politicians therein were sent by Pakistan. The Pakistani Army has relentlessly used “Azad Kashmir” to carry out terrorist activities against India. The Pakistani Army keeps a strict vigil on the activities of local residents in the locality. However, all welfare services such as health, education are in shambles and the people of the region are craving for their distinct identity.

Shri Senge Sering, director of Washington-based Institute of Gilgit Baltistan Studies said the people living in the Northern areas of Jammu and Kashmir are now fed up with Pakistiani rule.  The subsequent Pakistani regimes have committed gross atrocities on the people of this region. Citing an example, Shri Senge said that recently when the local residents of the area conducted peaceful demonstrations to protest against unemployment and shortage of food then Pakistani authorities lathicharged them and jailed a large number. The local residents do not have any independent Development Authority and the Pakistani regime does not spend a penny for welfare of the local residents. To illustrate his point, Shri Senge mentioned that schools are being run in sheds and shacks meant for poultry and colleges are promptly turned into police stations.  Power outages for as long as 14 to 18 hours is a daily routine and the administration does not even deem fit to repair electric transformers. Even the government employees do not get salaries for 6 to7 months at a stretch.

The area is rich in Uranium and other minerals but the government does not use these minerals for benefit of the people. Pakistan has banned mining for local residents but has given Chinese firms the rights to mine in these areas. Shri Snge urged the international organizations such as UN and India to pressurize China for withdrawing its mining activities from the area.

Singe further added that around 1.4 million people are living in pathetic conditions in the entire Gilgit-Baltistan region and thanked Bharat for giving serious thoughts to improving the lives of people in the region. 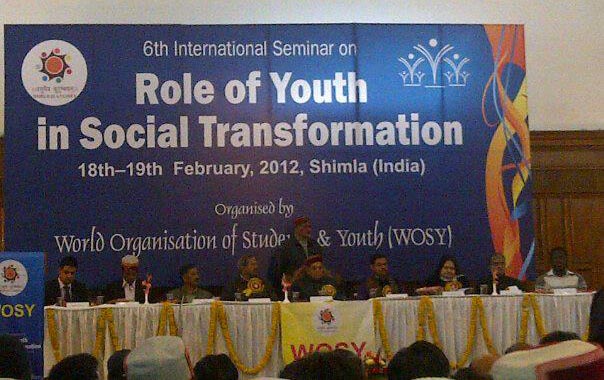