“The Rashtriya Swayamsevak Sangh (RSS) had made it clear long back through  RSS ideologue Sri Ranga Hari’s book, ‘Ini Njan Unaratte’ (ഇനി ഞാന്‍ ഉണരട്ടെ ), that all believers should be allowed inside Hindu temples,”he said.

“The statement of Union Minister Mullappalli Ramachandran, who said that Hindus do not support the idea of people of other faiths entering temples, is an insult to the Hindu culture that has always been open to all,” said Gopalakrishnan.

“The minister should have instructed the Guruvayur Devaswom to let Yesudas enter the temple and worship. After all, Lord Ayyappa goes to sleep everyday listening to Yesudas’ ‘Harivarasanam’,” he added.

(As per the temple custom, non-Hindus are not allowed inside Guruvayur Temple. The permission was denied for Dr KJ Yesudas for the entry as he was born in a Christian family)

Guruvayur Sree Krishna Temple is a Hindu temple dedicated to Krishna, located in the town of Guruvayur in Kerala, India. It is one of the most important places of worship for Hindus and is often referred to as “Bhooloka Vaikuntam“ which translates to the holy abode of Vishnu on Earth. The divine idol installed here represents the enchanting form of Sree Krishna endowed with the four lustrous arms carrying the conch Panchajanya, the discus Sudarshana Chakra, the mace Kaumodaki and the lotus. Adorned with the divine Tulasigarland the idol represents the majestic form of Maha Vishnu as revealed to Vasudeva and Devaki at the time of Krishna Avatar; Hence it is also known as Dwaraka of the south (of India). Shri Krishna is popularly known here by different names such as Kannan, Unni-Kannan (Baby Krishnan), Unni-Krishnan, Balakrishnan, and Guruvayoorappan.

Tue Jan 10 , 2012
In a rare and strange response on a social issue, Prime Minister Manmohan Sing has expressed his government’s deep concern over malnutrition in India. After being in power for 6 decades, the ruling party Congress, was least bothered on these issues, but ahead of polls in 5 states, the ‘Aam-Admi’ […] 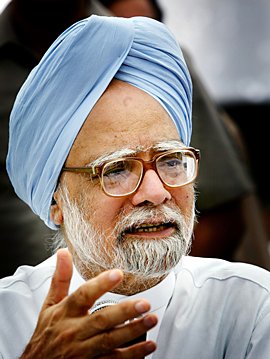