3 day Hindu Shakti Sangama comcludes in a spectacular valedictory, From 1894 villages of 13 districts of North Karnataka 21,554 swayamsevaks participated in this 3 day residential camp of exercise.

Hubli Janurary 29:  “We belong to a Hindu nation, known as Hindu Rashtra. Hindutva is the only ideology which unites this nation, which has all solutions for national challenges” said RSS Sarasanghachalak Mohan Bhagwat

He  was addressing a mammoth gathering of swayamsevaks at the valedictory of 3 day convention Hindu Shakti Sangama-2012 at Hubli.

“We have a great diversity in terms of food, culture, language and lifestyle. But by a basic inherited ideology of Hindutva we are related and united as a Hindu nation. It is a permanent theory and is never reactive. By Hindutva ideology our ancestors reached different part of the world from Mexico to Indonesia. Wherever they went, they contributed for the enhancement of their lives by teaching Yoga etc to those and seeded the eternal values of life”

“As said by Dr Kalam we forgot the worship of power (Shakti ki upaasana), due to which we were under slavery for thousand years. We need to regain the power make our society stable. RSS has doing this job of making these countrymen stronger to regain the power, to make a strong and prosperous Bharath”

“Men with character and social commitment are the need of the hour. In India we need such an awakened society to face challenges. This is the requirement for the world, as violence is growing globally; India has the potentiality to solve it. RSS is involved in making these countrymen to think and work for the nation” said Bhagwat

“This country is not just a piece of land for us. It is been worshipped as motherland since time immemorial. Our ancestors called it Mrunmayi. The society should remember 3 things, first the concept of Mathrubhoomi, Second proud of our Culture and third respect towards our ancestors. The one who always respects his ancestors and their contributions, values is a Hindu. He will feel that the river, mountains, environment and society is related to me directly or indirectly” opinioned the RSS Chief

“Hindutva always focuses on unity and integrity. Though India achieved Independence by administration, we should be self-dependent in our life. The Government and the Law (Shaasan and Prashasan) should help a common man in this direction. But due to short-sightedness and for mere political gains, people in govt are trying to divide the country by bringing new laws/bills or adhering to such policies of division. The administration should think of uniting people and not to divide. Hindutva ideology is the one which joins all countrymen” said Sarasanghachalak.

Mohan Bhagwat seriously accused central govt, said “Government’s  inept handling of the Military General’s age issue and the issue of scientists being black-listed. Government is demolishing and demoralising the esteemed personalities and established institutions of the nation such as Saints, the army and the scientific community”

RSS has indulged in making a united society by educating a common man about his individual role. Reminding the vedic sentences (Sanghachadwam Samvadadhwam, let’s walk together, let’s have a common voice), we always focus upon national integration in our daily activities.

“RSS never demands publicity for its activities. Our work is towards a silent social transformation. We educate swayamsevaks to involve in works which strengthens our national unity. Swayamsevaks established more than 1.5lakh of social service activities or seva projects across the country. During natural calamities Sangh swayamsevaks reached the spot even before police or army men and involved in rescue operations”

Mohan ji said “RSS swayamsevaks always joined hands with all positive activities which make society stronger; Swayamsevaks never took part in any anti-social activities. If at all a swayamsevak is doing a mistake in social life, he should refill himself with Sangh values. Such cases are rare as Swayamsevaks has only aim of Rashtronnathi– the Prosperity of the Country”

“In India, the political leaders are not the masters, but the society is the master.  The concept of Janata Janaardhan is well known. We suffered from imbroglio in Kashmir, Tibet etc due to lack of national vision. Though we didn’t attacked any country so far, we should be stronger enough to resist any foreign attack. We should have such a stabilised society so that we can have a stable administration”

“RSS has supported all forms for anti-corruption movements and will never tolerate corruption of any form. How can a society be corrupt, If strong character persists in individuals? “asked Bhagwat

In his presidential speech veteran scientist L.G. Dr V J Sundaram said “India got political freedom in 1947, but it was not economical. We had problem in several sectors, later we successfully achieved green revolution, white revolution and technological revolution. India has proved its potentiality in technology; our missile technology is one of the best on the world. In construction of Pruthvi Missile, I realised the strength of India being its project director”.

Prior to the speech of Sarasanghachalak, a spectacular show of demonstration of various Sangh physical exercises by swayamseavaks, attracted the gathering.

From 1894 villages of 13 districts of North Karnataka 21,554 swayamsevaks participated in this 3 day residential camp of exercise. Around 2000 swayamsevaks were working as Prabandhaks (volunteers in organising team).

The Hindu Shakti Sangama was held to commemorate 75th anniversary of visit of RSS founder Dr Keshava Baliram Hedgewar to Chikkodi of North Karnataka on January 16, 1937 from where RSS activities began in Karnataka.

The live webcasting of the programme was arranged for global viewers in www.samvada.org which is the official website of Vishwa Samvada Kendra, the media centre of RSS.

Earlier to this there was meeting of Saints (Sant Sammelan) and get-together of selected Intellectuals of north Karnataka was organised in which RSS Sarasanghachalak shared his thoughts and social concerns. Sun Jan 29 , 2012
India’s reputed missile scientist VJ Sundaram was presiding over the valedictory ceremony of Hindu Shakti Sangama-2012. Hubli Jan 29:In his presidential speech veteran scientist L.G. Dr V J Sundaram said “India got political freedom in 1947, but it was not economical. We had problem in several sectors, later we successfully achieved […] 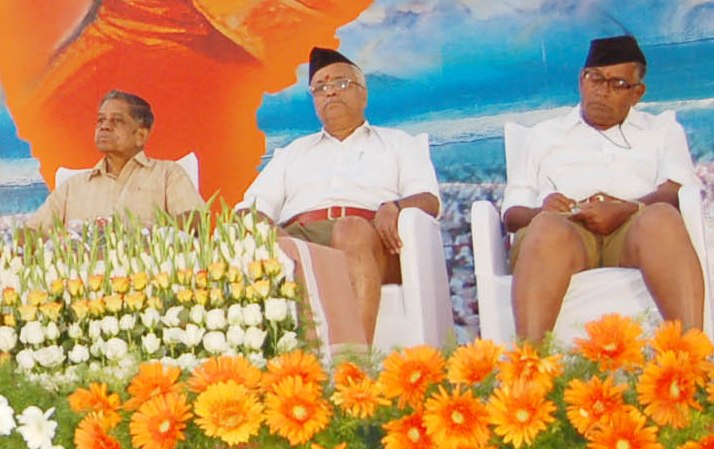