New Delhi: Rashtra Sevika Samiti has organised 35 training camps this year across the country. About 5,000 activists are being imparted training in these camps.  A similar training camp of four Prants (Kashi, Awadh, Goraksh and Kanpur) was organised in Kanpur from May 27 to June 14. A total of 225 Sevikas underwent training.  Pramukh Sanchalika of the Samiti Pramilatai Medhe was present in the Varga for four days i.e. from June 4 to 7.

Addressing the activists, Pramilatai Medhe said just assuming top posts by some women does not make the women safe and secure.  “There are so many women at top posts today but it has not benefited the women. The country should be in the hands of the sensitive people whether they are men or women,” she said. She also criticised the television show, Satyamev Jayate, saying that just highlighting social evils would benefit none. Nobody can eradicate these evils only through propaganda. It will only hurt the self-respect of the country, she said stressing the need to create a team of idealistic workers. She said the Sevika Samti is doing the same work for the last many decades. Akhil Bharatiya Bauddhik Pramuk of the Samiti Dr Sharad Renu addressed the concluding ceremony. She said the country would not achieve its pristine glory until the women play an active role in social transformation. She said the prime task of the Samiti is to awaken and educate the women for this responsibility. Presiding over the function noted gynecologist Dr Bina Agnihotri, said the task of national reconstruction is incomplete till the 50 per cent population of the country is not involved in the task. RSS Prant Pracharak Shri Anandji, Kshetra Sanghachalak Shri Ishwar Chandra were also present at the concluding ceremony.

Mon Jun 25 , 2012
New Delhi: “In the modern education system we have paid more attention to language and knowledge than the values of life. This resulted in the loss of mutual understanding in the society. Despite that, there are many mothers who are imparting good samskars and values of life to their children. […] 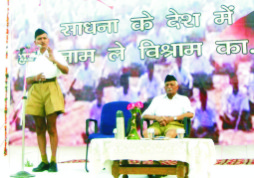