Dismissing the interlocutors report on the state of Jammu and Kashmir and questioning the credentials of the interlocutors, National Convener of Jammu Kashmir Study Center, a Jammu-based research group, Arun Kumar, says that the report only captures the perception of the country.

Arun Kumar asserts that the report dilutes India’s stand on J&K. Kumar argues that while the country has always maintained that J&K is an internal matter, the report says, ‘J&K should be acting as a bridge between Indian, Pakistan and central Asia’, a considerable shift from India’s traditional stand on the issue.

Kumar feels that though many of the observations cited in the report might be correct, the conclusions drawn are a complete mismatch, mainly because the recommendations of the report were predecided.

How do you see the report?

Broadly speaking, we feel that the mandate and mission of the entire exercise is in itself debatable. The interlocutors were appointed by the home ministry. All their programs and meetings there were arranged by the government. And the ministry decides to put up the report online after keeping it with themselves for seven months saying the views expressed are not of the government? What does this mean? Were they (the interlocutors) representatives of the government of India?

So, you think this report has been made by the home ministry?

Look at how the interlocutors were chosen. The interlocutors are neither residents nor stakeholders of the state of Jammu and Kashmir. MM Ansari (former central information commissioner  and one of the interlocutors) has never even been to J&K before this report. Their credentials are doubtful. There is non-seriousness about the report.

What are the issues in the report that trouble you the most?

There are many. For instance, the report says that the state of J&K should be acting as a bridge between Indian, Pakistan and central Asia. How can J&K being a bridge when it is an integral part of India.

In a decision taken by the Pakistan supreme court in 2004, the court said that it cannot interfere in matters related to Azad Kashmir. Hence, something that has been established that the region is not a part of Pakistan is being challenged by the report

The interlocutors are speaking the language of the separatist because they are their agents. Look at their credentials. Both Dilip Padgaonkar (eminent journalist) and Radha Kumar (noted academician Radha Kumar) were regulars at Ghulam Nabi Fai’s (Kashmiri separatist) conferences.

What do you think the report is trying to build?

In 2006, Prime Minister Manmohan Singh and General Musharraf had come together to work on a track to diplomacy and a pact was believed to have been agreed upon. Besides others, the pact, broadly, said that LOC (Line of Control) would be accepted as the international border, and the state of Jammu & Kashmir would be given maximum autonomy on both sides. It thus tried to achieve a win-win situation for both India and Pakistan.

The purpose of this report is to legitimise the pact between Manmohan Singh and Musharraf.

How is this win situation for India?

The question that comes to everybody’s mind is whose report is this?

Is this the government of India’s report? The interlocutors appointed by it.

Our stand has always been that Jammu & Kashmir is an internal matter. But soon after the pact, the prime minster says that both Pakistan and India are victims. Later, it is conceded that a dialogue should be started with representatives from PoK and people from Pakistan. You are then accepting it as a dispute.

Gradually, they are shifting from what our policy on J&K has always been.

The report makes some grave observations about conditions in Kashmir?

The report cites that the reasons of victimhood of Kashmir are rigged elections, arrest of popular leaders and human right abuses and violence perpetrated by militants, and security forces. How can you equate the two?

Look carefully at the use of words; you can’t say the security forces perpetuated violence.

The report later concludes that all these factors collectively resulted in a start point for religious extremism. Hence there are demands in the state ranging from ‘azadi’, ‘establishment of Islamic state’, ‘autonomy self rule’ and ‘an achievable nationhood’.

And all this happened because ‘Special Provisions’ under article 370 was taken back? I can assure you that nobody in Jammu & Kashmir can tell you that. Don’t you see any international party or Pakistan’s role here?

Doesn’t the report capture the popular or majority sentiment of what the people of the state feel?

18 percent of the state population is Gujjar Muslim. Where is their leader?

90 percent of the population in Kargil is Muslim. Where is their leader?

Basically, they have captured the perception of the country. These people are not the real voice of the state.

What are the other problem areas in the report?

The report has not addressed the real issues of Jammu & Kashmir. There is a chapter on economics that says that there is heavy corruption in the 16 flagship schemes started by center, and no infrastructure development can happen without assistance from the central government. After making all these observations, they say employment can’t be generated because there is no investment, and hence the special status of the state should remain.

There is a total mismatch between the observations made and the conclusions drawn.

Furthermore, there is nothing about the settlements of over 10 lakh PoK refugees. Where is the roadmap on how to bring Kashmiri pundits back?

There are about four lakh refugees on the west part of the state. They have been living without citizenship for the past 64 years. Why doesn’t the report address their problems?

There is a false concept of Kashmir alone being the victim. Isn’t Jammu a victim; isn’t Laddak region a victim?

There is no 73rd and 74th amendment in the state and panchayati raj has not been implemented. After making all these observations, the report recommends that Parliament should not extend any new law.

All this is politics of appeasement. As long as you see problems in Jammu & Kashmir from a Hindu-Muslim angle, as long as vote bank politics rules, there will be no solution. You will have to see it as a national security issue.

Mon Jun 25 , 2012
NEW DELHI: These are one set of statistics Kerala will not be proud to own up to: God’s own country — proud of its high count on literacy and health indicators — and not the badlands of north India, is the most crime-prone state, ahead of Uttar Pradesh and even […] 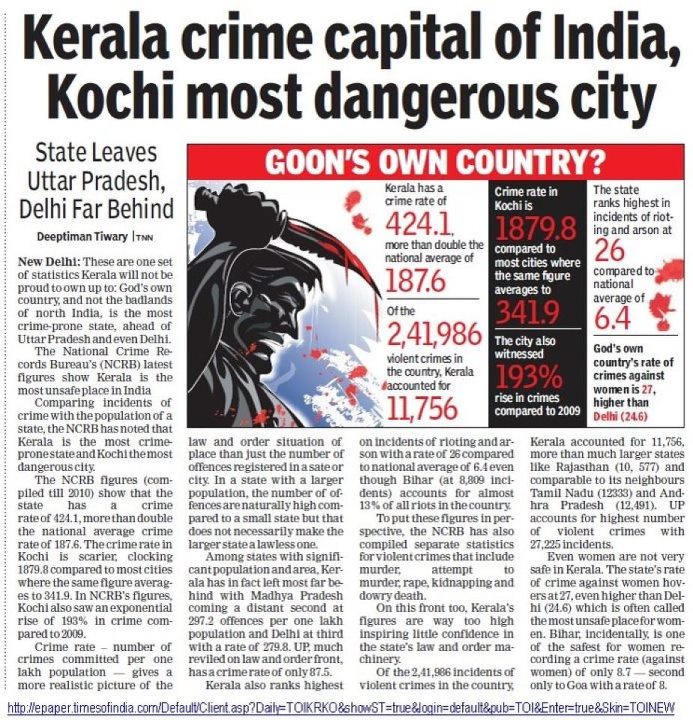