Chennai November 3; 2012: RSS Akhil Bharatiya Karyakarini Mandal Baitak, the one of the highest body for policy formulation and decision making, has passed a major resolution today at Chennai, on national security issue and expressed deep concern on Bangladeshi ifiltration to India.

Violence in Asom and Nationwide Challenge of Bangladeshi Infiltrators

The Akhil Bharatiya Karyakari Mandal strongly condemns the July 2012 violence perpetrated by the Bangladeshi Muslim infiltrators in the Kokrajhar, Chirang and Dhubri districts of Asom, the violent demonstrations organized in various parts of the country and the conspiracy to terrorize the people of North-East living in different parts of the country to flee from their places and considers all these acts as a serious challenge to the country.  Continuously growing infiltration in the Asom and nearby areas has created state of a serious crisis.

The infiltrators have settled in large numbers in all the four districts of Bodoland Territorial Area District (BTAD) which was created as a result of an agreement with the Central and State Govts in 2003. These infiltrators have vitiated the social, cultural, natural, economic, religious and political environment over there with far reaching consequences.  Muslims had called for a bandh on May 29, 2012 demanding reservations in the Bodoland Territorial Council (BTC).  The unconstitutional assurances of providing reservations to Muslims, given by some political parties of the country flared up the situation. The situation went beyond control after the brutal murder of four Bodo youths by the Muslims on July 20, 2012. In the violence that followed, as per Govt records Ninety persons were killed and four lakhs were displaced into relief camps.  Large number of infiltrators are staying in these relief camps, they need to be identified and deported. From this point of view, the resolve of several organizations of Asom, expressed from common platform, of not allowing rehabilitation of these infiltrators is praiseworthy.

The ABKM decries attempts to portray the Asom incidents in particular and Bangladeshi infiltrators’ issue in general as a Muslim issue. Inflammatory utterances of certain leaders inside and outside the Parliament about fresh wave of radicalization of Muslims and visit of MP’s belonging to only Muslim community to some select camps in the violence affected areas should be condemned by all right thinking sections of the society as efforts to give communal colour to the essentially natives versus foreigners issue.

People in the country are deeply concerned about the preplanned, aggressive and violent demonstrations organized by the Muslim fundamentalists in Mumbai, Prayag, Lucknow, Kanpur, Bareilly, Ahmedabad, Jodhpur, etc.  in the aftermath of Asom incidents.  Violent demonstrators in Mumbai have not only attacked media persons and citizens, snatched away arms from policemen and dared to derogate and destroy national monuments but also targetedly humiliated and manhandled women police personnel. It is even more serious that the Administration could neither anticipate such incidents nor is showing keenness to identify and punish the culprits.  The ABKM strongly condemns all these acts.

At the same time, the anti national elements began issuing, personally and through communication channels, threats to the people of North East residing in different parts of the country of vengeance after the Ramzan.  This forced people from Bengaluru, Pune, Hyderabad and Chennai to flee in large numbers to their homes in the North East. In this hour of crisis, thousands of patriotic persons  demonstrating highest sentiments for national integrity and sense of responsibility , stood up to provide security and all kinds of help to these fear stricken people and persuaded them not to leave their places.  That is the reason why the wave of fear did not spread to other places and the self confidence of the people of North East was restored.  The ABKM expresses hearty appreciation for all those citizens and reassures the people of North East that the whole country stands by them.  The ABKM demands from the Government to identify and bring to book such anti-national scare mongers for stringent punishment.

Inspite of the Supreme Court striking down the infiltration-friendly Illegal Migrant Determination by Tribunals Act 1983, orders of Honourable High Courts of Delhi and Guwahati for deportation of the infiltrators and senior and responsible officials repeatedly drawing the attention towards the gravity of the issue, both the Central and various State Govts motivated by their vote bank politics are only encouraging these forces, rather than acting firmly against them.  Bangladeshi infiltrators have today spread in the entire nation. These infiltrators, besides disturbing the demographic balance, are posing serious threat to the security of the country by indulging in various objectionable and illegal acts. They are involved in the circulation of fake currency, illegal trade of arms, drugs and cattle smuggling and several other criminal acts besides becoming a tool in the hands of the ISI.

The ABKM demands that the Central and State Govts, in the light of the Foreigners Act 1946 and the orders of various Courts, including the Supreme Court, should meticulously detect, deny citizenship facilities and deport all Bangladeshi infiltrators. Names of those persons who have got enlisted in the voter lists too need to be deleted immediately.   While rehabilitating the persons displaced in Asom violence, care must be taken that the infiltrators do not get resettled over there and no infiltrator gets the Adhar card. The ABKM also demands from the Govt that the work of fencing the Bangladesh border be completed without delay. The National Register of Citizens be completed systematically.

The ABKM calls upon the patriotic citizens to treat this issue as a national problem and play active role in detecting these infiltrators and deleting their names from the voter lists and also to keep in mind that engaging the infiltrators in any work assignment is not only illegal but, also a grave danger to the country.

Sat Nov 3 , 2012
Chennai November 03, 2012: Press Conference by Dr Krishna Gopal Ji, Joint General Secretary of RSS, on Day 2 of RSS National Council Meeting. On the second day of the national council meeting of the RSS a resolution was passed on the growing infiltration into Assam and other parts of […] 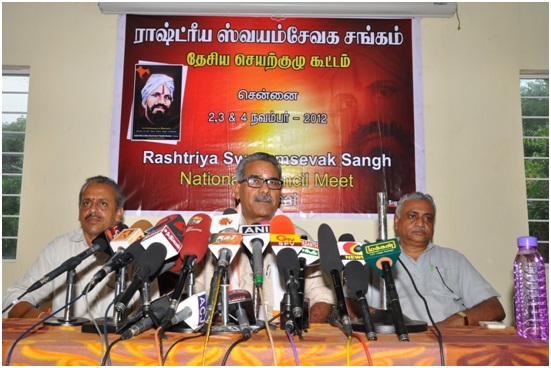