Chennai November 4; 2012: On the third and concluding day of Akhil Bharatiya Karyakarini Mandal Baitak, the one of the highest body for policy formulation and decision making, RSS has passed another major resolution on national security issue and expressed deep concern on national security policy with China. On the eve of 50 years of China – Bharat war of 1962, the Akhil Bharatiya Karyakari Mandal pays rich tributes to the thousands of brave soldiers who had laid down their lives in that war trying to defend our country’s borders. Countless stories of inspiring chivalry have been buried under the glaciated battle fields of the Himalayas in Ladakh and Arunachal Pradesh alongwith the bodies of those brave soldiers. Even after 50 years bodies of some of those soldiers are being found on the mountains.

Our soldiers were made to fight a war in which they were ill-equipped and grossly outnumbered by the enemy. What is most unfortunate is that in its ignoble attempt to hide its failures, the then political leadership of the country also suppressed the courage and sacrifice of these brave soldiers. The ABKM appeals to the nation to respectfully remember their valour and sacrifices.

The RSS ABKM reiterates its solemn and firm commitment to the integrity of Bharat. The outcome of the war of 1962 remains a sad memory for the nation. We lost around 38,000 sq. km of our territory to the Chinese aggressors in that war. The Aksai Chin region continues to be under Chinese control. Our Parliament had passed a unanimous resolution on 14 November 1962 swearing to take back every inch of the territory occupied. However, the ABKM notes with regret that instead of working towards that objective the Governments are engaged only in legalising the LAC in the name of border talks. On its part, China has not stopped its invasion after 1962. It continues to nibble away our territory through endless incursions along all the three sectors of the Bharat-Tibet border.

It is universally acknowledged that the debacle of 1962 was essentially the making of the political and diplomatic leadership of our country. Warnings by several eminent people including Sardar Patel and Sri Guruji were unheeded to by the then leadership which went about with its romantic world view totally ignoring the ground situation. China had annexed Tibet first and then launched aggression on our territory. Unfortunately, the facts of the Bharat – China war of 1962 are still hidden in the South Block cupboards. It is most unfortunate that successive Governments have refused to declassify key documents like the Henderson Brooks – PS Bhagat Report. The ABKM demands that the report be immediately declassified so that the nation would be benefitted by the knowledge of the blunders committed while the political, diplomatic and military leadership too would be able to learn many a lesson from those mistakes.

China has strategically built and upgraded its border infrastructure along Bharat-Tibet border that includes a network of air bases, missile launching pads, cantonments and other physical infrastructure. The ABKM calls upon our Government that in view of the enhanced threats from the aggressive manoeuvres of China along the border Bharat also should invest adequately in border management and security preparedness.

The demand of the Armed Forces to develop special Mountain Strike Corps is still hanging fire due to lethargy and red tape in the Government. Modern wars are not necessarily fought only on the borders. We need to develop comprehensive military technological superiority keeping in view the rapid strides China has made in this field. While we can take pride in our advances and successes in missile technology we are still dependent in a big way on imports for major military hardware.

The deep penetration of China in vital sectors like energy, information and communication technology, industry and commerce in Bharat and its designs to divert our river waters are a serious cause of concern.

The ABKM underscores the threat from China in the field of cyber technology and communications. China has invested heavily in developing strong cyber warfare capability using which it can cripple the technological capabilities of even the advanced countries like the US. Those countries are also concerned about this threat from China and are taking counter measures. While our advances in hi tech areas are noteworthy the ABKM urges the Government should give necessary importance to augmenting our cyber-security capability also.

Bharat has always strived to maintain good relations with various countries. About two decades ago we exhorted a new Look East Policy thereby trying to establish closer relations with countries to our East and South-East. We have all along been the champions of peace in the world. In order for us to achieve these lofty ideals the ABKM urges the Government that it should learn lessons from the 1962 experience and give highest priority to developing a comprehensive national security policy vis-a-vis China.

RSS has no role in BJP's affairs: Bhaiyyaji Joshi

Sun Nov 4 , 2012
Chennai November 04, 2012: After distancing itself from the controversy over Nitin Gadkari’s business dealings, RSS on Sunday said it was upto BJP to decide on his second term as party president. RSS General Secretary Suresh Bhaiyyaaji Joishi was speaking with reporters at Chennai, said “It is not an issue of RSS. […] 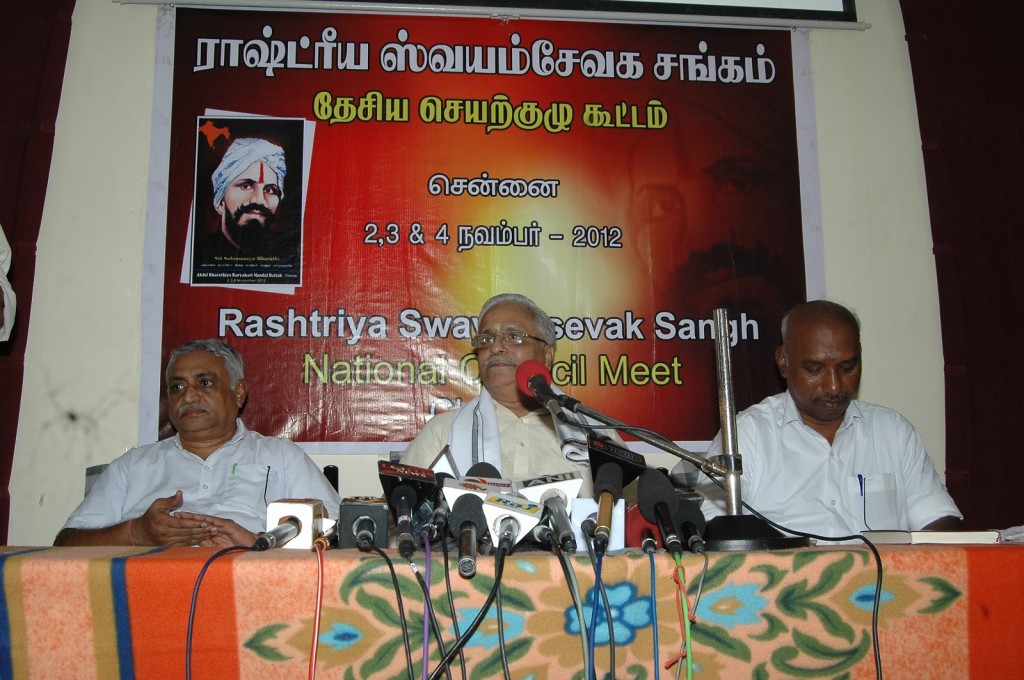