Skip to content
Chennai November 02-2012: RSS Joint General Secretary, Dattatreya Hosabale addressed media after the inaugural ceremnony of on going 3 day RSS national apex body meet, Akhil Bharatiya Karyakarini Mandal Baitak. Dr Manmohan Vaidya, RSS Akhil Bharatiya Prachar Pramukh was present during the press briefing.
THE SUMMARY of Hosabale’s press briefing is given below:
The Akhil Bharatiya Karyakarini Mandal Baitak, (ABKM) of RSS is meeting in Chennai for the first time in history. For organizational purpose RSS has two zones in Tamil Nadu, North and South. Such a meeting is being held for the first time in North Zone of Tamil Nadu. A similar meeting was held in Kanyakumari, a few years back. All office bearers are overwhelmed by the affectionate reception given by the people of Tamil Nadu. The arrangement in spite of cyclone has been superb. They are enjoying the hospitality, weather and food of Tamil Nadu.
ABKM will be concluded on November 4, 2012. We meet two times in a year. Once in March the highest apex body meet ABPS and once between Vijayadasami and Deepavali, ABKM. We will discuss the plan for three years expansion programme. As we all know the 150th birth anniversary of Swami Vivekananda will be celebrated throughout the country. Vivekananda Kendra and other organizations inspired by RSS have come together to form a celebration committee. The committee will be declared on Nov 19th at Delhi. The programmes will start on Dec 25th, 2012 which is a very significant day as Swami Vivekananda meditated for 3 days at the famous rock at Kanyakumari starting from this day. The programmes will be in 5 segments – Youth, Women, Intellectuals, rural area and tribal belts with the basic tenets given by Swami Ji – Thyaga and Sewa. We are going to discuss how sangh will involve in these activities. In fact the planning is going on already for six months. Each state will have a state committee and there will be an All India Committee.
RSS to pass two resolutions:
Once again RSS thankful to the people of Tamil Nadu and RSS volunteers from Tamil Nadu.

1. Question: Will there be resolutions on issues related to Tamil Nadu – Mullaiperiyar, Kaveri and Sri Lanka issue.
Answer: All these issues have been discussed and in fact a resolution was passed on Sri Lanka issue some time back. Sangh does not consider this as an issue of Tamil Nadu but treats them as national issues.
2. Question: Civilizations have come through migration and people are moving all the time. How can sangh pick on infiltration from Bangladesh alone?
Answer: Though they may be from the same culture politically both Bangladesh and Pakistan are different countries. The people are different citizens. Hence the people illegally coming from the country have to be treated as infiltrators.
Whether it is possible to curb this depends on the will of the people and the will of the government.
3. Question: What will be your approach if Hindus come to this country as refugees? Will it be different?
Answer: Hindus coming from any land to India will be treated as refugees. Even to the constitution this was acceptable in 1947. For Hindus this is the only country. Hindus come here because of harassment and humiliation.
4. Question: There is a dichotomy in RSS. Hindus should be treated as refugees but others as infiltrators.
Answer: Culturally we are one. But Bangladesh and Pakistan have declared themselves as theocratic states. We have declared our country as a secular country. Hindus have no rights in those countries. They are not treated as equal. People from Bangladesh do not come here due to harassment.
5. Question: Democracy and Pluralism are the pillars of this country. Is this view not against all this?
Answer: We say that whole world is one family. Does it mean if China attacks we should consider as brother attacking us and be quiet?
6. Question: Kejriwal has attacked both BJP and Congress. What is your stand?
Answer: It is for the Congress and BJP to answer the question. Sangh has taken the stand that all those facing such allegation have to face the probe and clear themselves
7.Question: Gadkari is a swayamsewak. Will you not discuss about him in this meeting? Why you are critical of Congress on corruption what is your stand on him?
Answer: Gadkari is a swayamsewak. There can be internal discussions on the issue. Decisions on BJP matters are taken only by them. We do not interfere.
8.       Question: There was a mention of a resolution on land grabbing. Gadkari is also facing an allegation on that?
Answer: Why single out Gadkari? We are not going soft on anyone. There will be no different yardstick on corruption. Public Morality and National Integrity is supreme.
9.       Question: What do you say about the political situation?
Answer: It is very different from place to place across the country. It is difficult to say. But one thing, people of the country want a change for the better.
10.   Question: Yeddyurappa Vs Gadkari. Yeddyurappa was asked to step down but why not Gadkari?
Answer:  Yeddyurappa had to step down because after Lok Ayuktha probe. It is only media allegation in case of Gadkari. In case of Yeddyurappa it is the party that decided that he should step down.
11.   Question: There seems to be lot of politicization of society?
Answer: It is a matter of great concern. It is not good. As Dr A P J Abdul Kalam has said spiritualization is required and not politicization. It is a matter of concern that people are losing faith in political parties. 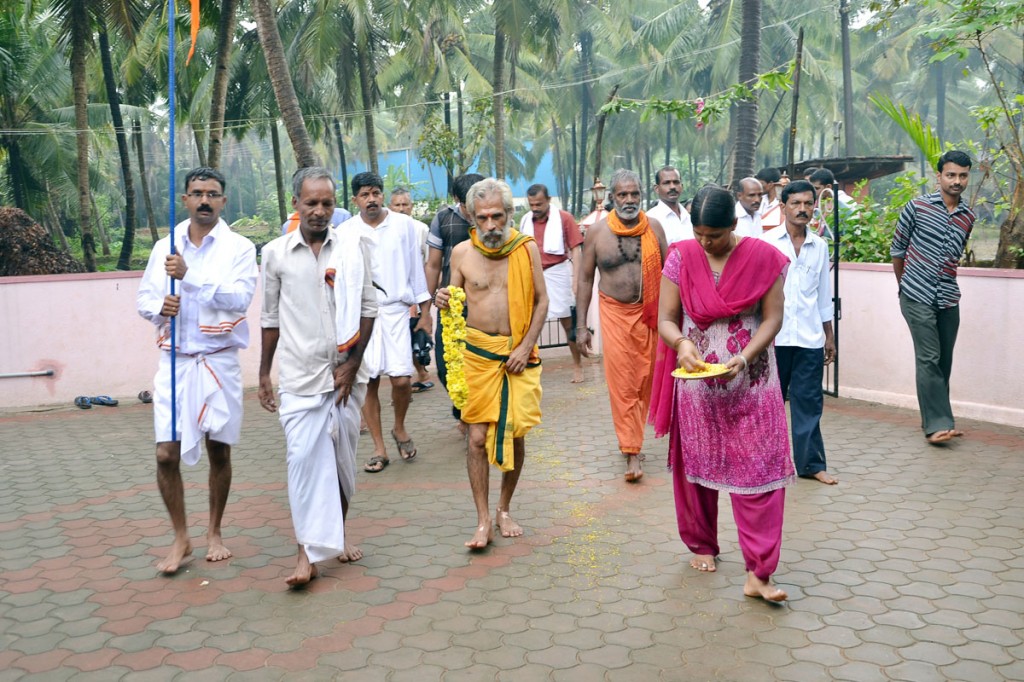