Sangh Pracharak Daadaarao Paramarth started the first ever RSS Shakha in Karnataka at Chikkodi in 1935 heralding Sangh Work in Karnataka. On January 16th, 1937, FOUNDER and FIRST Sarasanghachalak of RSS Dr. Keshava Baliram Hedgewar visited Chikkodi of Karnataka. Year 2012 will be the 75th year of Dr Hedgewar’s visit to Karnataka. A new chapter in social reforms in Karnataka began after Sangh establishment in state. RSS, today considered to be the largest Social Service organisation in the world.

THE RSS, Social Service And Reform

Rashtriya Swayamsevak Sangh (RSS), was founded Vijayadashami Day in 1925 by Dr. Keshav Baliram Hedgewar, who was a doctor in city of Nagpur, Central India

The RSS has advocated the training of Dalits and other backward classes as temple high priests (a position traditionally reserved for Caste Brahmins and denied to lower castes). They argue that the social divisiveness of the Caste system is responsible for the lack of adherence to Hindu values and traditions and reaching out to the lower castes in this manner will be a remedy to the problem. The RSS has also condemned ‘upper’ caste Hindus for preventing Dalits from worshipping at temples, saying that “even God will desert the temple in which Dalits cannot enter”.

During M. K. Gandhi’s visit to RSS Camp accompanied by Mahadev Desai and Mirabehn at Wardha in 1934, he was surprised by the discipline and the absence of untouchability in RSS and commented “When I visited the RSS Camp, I was very much surprised by your discipline and absence of untouchablity.” He personally inquired to Swayamsevaks and found that they were living and eating together in the camp without bothering to know their castes.

Dr Bhimrao Ambedkar while visiting the RSS camp at Pune in 1939 observed that Swayamsevaks were moving in absolute equality and brotherhood without even caring to know the cast of others.  In his address to the Swayamsevaks, he said that ” This is the first time that I am visiting the camp of Sangh volunters. I am happy to find absolute equality between Savarniyas (Upper cast) and Harijans (Lower cast) without any one being aware of such difference existing.” When he asked Dr Hedgewar whether there were any untouchables in the camp, he replied that there are neither “touchables” nor “untouchables” but only Hindus.

It is noted that RSS is taking a lead role in providing the education to people of rural India and socially backward classes living under the extreme poverty.

One thought on “RSS Karnataka celebrates 75th year of Dr Hedgewar’s visit to Chikkodi of Jan16,1937”

Sun Jan 15 , 2012
Uttara Pradesh: At a home coming ceremony organised in Shahjahanpur, Uttar Pradesh, on December 23, 2011, over 1200 people returned to their Hindu roots. All these people had embraced Christianity and Islam sometime back. They have now resolved to live according to the Hindu traditions. The function was organised by Agnivir. […] 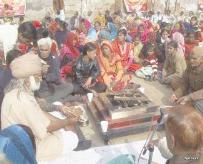