Nagpur: March 16: Citizens of India enjoy the prime authority over the natural resources in the country and care must be taken to protect this right before utilizing these resources for other purposes. Draft regarding this issue will be tabled in the Akhil Bharatiya Pratinidhi Sabha (ABPS), said Rashtriya Swayamsevak Sangh Saha Sarakaryawah Shri Dattatreya Hosbale while addressing a press conference in Nagpur on March 16 regarding the proposed issues to be discussed in the ABPS.

Citing the example of water while commenting on the natural resources, he said that, the countrymen must get clean and pure drinking water which is the right of every citizen. Today, most of the water obtained from the natural resources has become polluted. Purification work of this water must be undertaken on priority but while letting out this water for industrial purposes, it must be accepted that the public has the primary authority over this water, he said.

People can have some grievances regarding certain issues. Nobody will deny this fact. But while accepting these demands, vested political interest should not creep in. RSS feels that such demands should be accepted with the spirit of ‘Ek Rashtra, Ek Jan.’ The intentions of disintegrating the society under the camouflage of such agitations must be nipped in the bud. Resolution regarding the same will be passed in the Pratinidhi Sabha with a view to ensure the national integrity, he informed.

RSS is strongly opposed to the concept of ‘live-in relationship’ that is raising hood nowadays. Husband and wife living together are certainly justified. However, ‘anybody living with anybody’ is totally unjustifiable. This concept is not only against Indian civilization but it is dangerous for the entire human race. Acceptance of this system will end the feeling of mutual trust among the society. Hence this anti-social system must not be accepted on any ground. RSS advocates the policy of three generations living together happily in a single family, he said.

While replying to a question in this regard, Hosbale said that the senior citizens live in alienation because of some unavoidable circumstances. Such people should associate themselves with various seva activities that are going around them rather than adopting the path of live-in relationship. He also cited the examples of late Nanaji Deshmukh’s Chitrakoot and Sadhvi Ritambhara’s Vatsalyagram Ashram at Vrindavan while elaborating the issue. Senior citizens living at these ashrams look after the underprivileged children and give them parental affection, he said.

Informing that RSS is working on the issues of cattle conservation and family motivation with due concern, he said that family is the smallest constituent of the society. Hence it must be ensured that the children should get all types of sanskars in the family itself. The seeds of nationalism must be sowed in their hearts. From this point of view, RSS organizes the programmes for motivating the family heads from time to time. A workshop was conducted recently for addressing the newly-married and the importance of marriage and family was inculcated in their minds. Television has narrowed the gaps among the hearts of individuals. Hence ‘No TV Day’ should be observed at least once a month in every house. On this day, all the family members must dine together, visit the places of historical importance or a seva project and visit the temples.

RSS plans to celebrate the year 2013-14 as the 150th birth anniversary year of Swami Vivekananda on a wide scale. Accordingly, the preparations will be made during this year for the upcoming celebration. The details will be discussed in the meeting and the resolution will also be passed regarding the same, he said.

People will be made acquainted with the noble views of Swami Vivekananda that are also valuable in today’s date. Programme schedule is being framed in accordance with Swami Vivekananda’s views regarding issues such as women empowerment, nation building and nation-centered policies. Thrust will be given on the propagation of the idea that the re-construction of nation is not possible unless the economically backward, dalit and underprivileged sections of the society are uplifted, he elaborated. 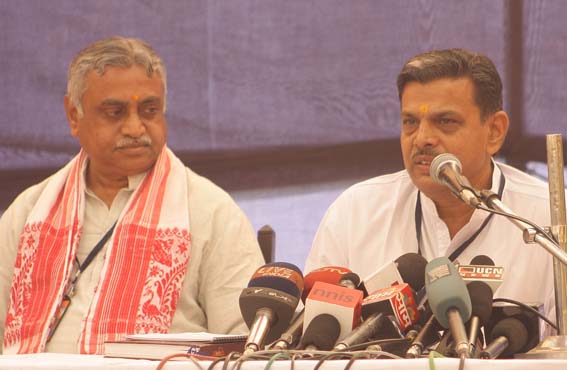