The Nyas conferred the coveted Bapurao Lele Patrakarita Puraskar on noted journalist, consumer activist and social worker of Nagpur, D G alias Rajabhau Pophali while Dadasaheb Apte Photo-journalist award was given to Ganesh Bisht from Delhi and noted Hindi writer Mridula Sinha was honored with Smt Asharani Vora Mahila Patrakarita Puraskar. All the awards were given jointly by Dr Bhagwat and Girish Gandhi on this occasion. The awards carried a citation, shawl, shreefal and a memento besides cash award of Rs 51,000/- for Lele Puraskar and Rs 21,000/- each for the remaining two awards.
In his speech the RSS Chief drew attention of the gathering towards the position of media in the society and the importance it wielded in shaping the social atmosphere. Tracing the development of media from news paper to mass communication Dr Bhagwat stressed on increasing responsibility of the media towards the society.
He said that the fundamentals did not change with changing times and situations. The values that sustain the society were eternal. What was needed was to present those values to raise the standard of the society by highlighting the duties. The media has to play an important role to keep the process of dialogue and communication on the right track so that the society develops itself on the positive values, Dr Bhagwat said.

The media should never forget its responsibility and commitment to the society, the RSS Chief asserted appealing to the journalists to identify positive actions and values and spread them among the masses for a better future.
Lauding the efforts of the Nyas to bring into light what is best in journalism by felicitating such personalities who strived for certain values and morals while remaining in this field. The society should come forward to sustain and support such noble efforts, he appealed to the people.
He said that highlighting positive attitudes and values was necessary to create a positive atmosphere in the country. Journalists could achieve this through their writings, he added.
Addressing the gathering Girish Gandhi said that media must highlight the fundamental issues without devaluating their standards and commitment to the society. He said it was wrong to apply ‘code of conduct’ to field of journalism only when there was a downward trend in all the fields related to social life of the country.
He praised all the journalists who were felicitated on the occasion for their courageous reporting and writing on issues of public concern. Shri Rajabhau Pophali and Smt Mridula Sinha expressed their gratitude on the occasion in response to the felicitations.
President of the Nyas Dr N M Ghatate proposed vote of thanks while Yashwant Indapurkar read out the citations besides making the introductory remarks about the Nyas and its activities.
Noted luminaries from field of journalism including former RSS Spokesman M G Vaidya, former Editors of Tarun Bharat D B Ghumare, L T Joshi, and others were present on the occasion.

Can Those Who Have Discarded 'Bharath Matha' Change India?: writes Pratap Simha

Mon Aug 6 , 2012
Note: This piece is the translation of  Sri Pratap Simha’s oped in Kannada, which appeared in Kannada Prabha on August 4, 2012. The picture used here is a screen (below) clipping from the original graphic used in Kannada Prabha. Comments and criticism welcome. (Translated by Sri Sandeep, New Delhi) Signs of such a possibility […] 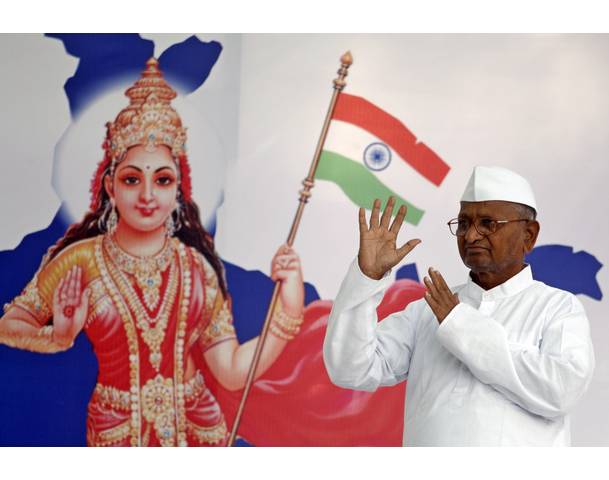