Mumbai, November 17, 2012: Popularly called Hindu Hrudaya Samrat, the Shivasena supremo Balasaheb Thackeray expired on Saturday evening at his residence Mathoshree at Mumbai. He was suffering from a complex respiratory disorder. He was 86. Shiv Sena chief was admitted to Lilavati hospital’s ICU in Mumbai on 25 July 2012,  as per reports he has stopped eating and is on continuous oxygen. Thackeray breathed his last at 3.30 PM, according to his doctor Jaleel Parkar.

Thackeray began his professional career as a cartoonist with the English language daily the The Free Press Journal in Mumbai, but left it in 1960 to form his own political weekly Marmik. His political philosophy was largely shaped by his father Keshav Sitaram Thackeray, a leading figure in the Samyukta Maharashtra movement (United Maharashtra movement), which advocated the creation of a separate linguistic state of Maharashtra. Through Marmik, he campaigned against the growing influence of Gujaratis, Marwaris, and southern Indians in Mumbai. In 1966, Thackeray formed the Shiv Sena party to advocate more strongly the place of Maharashtrians in Mumbai’s political and professional landscape. In the late 1960s and early 1970s, Thackeray built the party by forming temporary alliances with nearly all of Maharashtra’s political parties. Thackeray is the founder of the Marathi-language newspaper Saamana and the Hindi-language newspaper Dophar Ka Saamana.

A controversial figure, Thackeray has attracted significant attention by making statements expressing admiration for Hitler as an artist and demagogue, while condemning the Holocaust, inciting violence against Muslims, expressing support for the LTTE, and taking strong stances on the aspects of popular culture, including fervent opposition to the celebration of Valentine’s Day.

He was born to Keshav Sitaram Thackeray (also known as ‘Prabodhankar’ Thackeray because of his articles in his fortnightly magazine named Prabodhan or ‘Enlightenment’) Marathi family. Keshav Thackeray was a progressive social activist and writer who was against caste biases and played a key role in the Samyukta Maharashtra Chalwal (literally, United Maharashtra Movement) in the 1950s to form the Marathi-speaking state of Maharashtra with Mumbai as its capital. Shiv sainiks called them ‘Hindu Hriday Samrat‘ with love (Emperor of Hindu’s heart).

Bal Thackeray started his career as a cartoonist in the Free Press Journal in Mumbai.  His cartoons were also published in the Sunday edition of The Times of India. In 1960, he launched a cartoon weekly Marmik with his brother. He used it to campaign against the growing numbers and influence of non-Marathi people in Mumbai targeting Gujaratis and South Indian labor workers.

He formed the Shiv Sena on 19 June 1966 with the intent of fighting for the rights of the natives of the state of Maharashtra (called Maharashtrians). The early objective of the Shiv Sena was to ensure job security for Maharashtrians competing against immigrants from southern India, Gujaratis and Marwaris.

In 1989, the Sena’s newspaper Saamna was launched.

Politically, the Sena was anti-communist, and wrested control of major trade unions in Mumbai from the Communist Party of India and demanded protection money(extortion) from mainly Gujarati and marwari business leaders. It later allied itself with the Bharatiya Janata Party (BJP) over the common issue of Hindu Nationalism which both parties believed in. The BJP-Shiv Sena combine won the 1995 Maharashtra State Assembly elections and came to power. During the tenure of the government from 1995 to 1999, Thackeray was nicknamed ‘remote control’ since he played a major role in government policies and decisions from behind the scenes. Bal Thackeray lost his wife Meena to a heart attack in September 1996, and his eldest son Bindumadhav (“Binda”) to a road accident on 20 April 1996.

On July 28, 1999 Bal Thackeray was banned from voting and contesting in any election for six years from December 11, 1999 till December 10, 2005 on the recommendations of the Election Commission. After the six-year voting ban on Bal Thackeray was lifted in 2005, he voted for the first time in the 2006 BMC elections.

Thackeray has claimed that the Shiv Sena has helped the Marathi manoos (the Marathi commoner) in Mumbai and also fought for the rights of Hindu people,Thackeray is a staunch Hindu and believes that Hindus must be organised to struggle against those who oppose their identity and religion, especially in the public sector. Opposition leftist parties allege that the Shiv Sena has done little to solve the problem of unemployment facing a large proportion of Maharashtrian youth during its tenure, in contradiction to its ideological foundation of ‘sons of the soil.’ He is great.

On August 14 2012, Bal Thackeray published an editorial in Saamna newspaper condemning the Congress ruled Maharastra government for “bowing” before “anti-national” Muslims who went on the rampage in Mumbai. He labeled the violence as “grand rehearsal” of the 26/11 terrorist attack on Mumbai.

“While 26/11 happened all of a sudden, Saturday’s violence happened right under the nose of the city police. Those who held south Mumbai to ransom are not just miscreants, they are anti-national Muslims. However, it is unfortunate that the police did nothing to control the crisis.”

“The office of the police commissioner is barely 100 steps away from the place where the Muslim youths went on the rampage. They took away weapons from policemen, molested women, assaulted innocent citizens and torched public vehicles. Yet the police did nothing. Their bullets turned into chocolates. 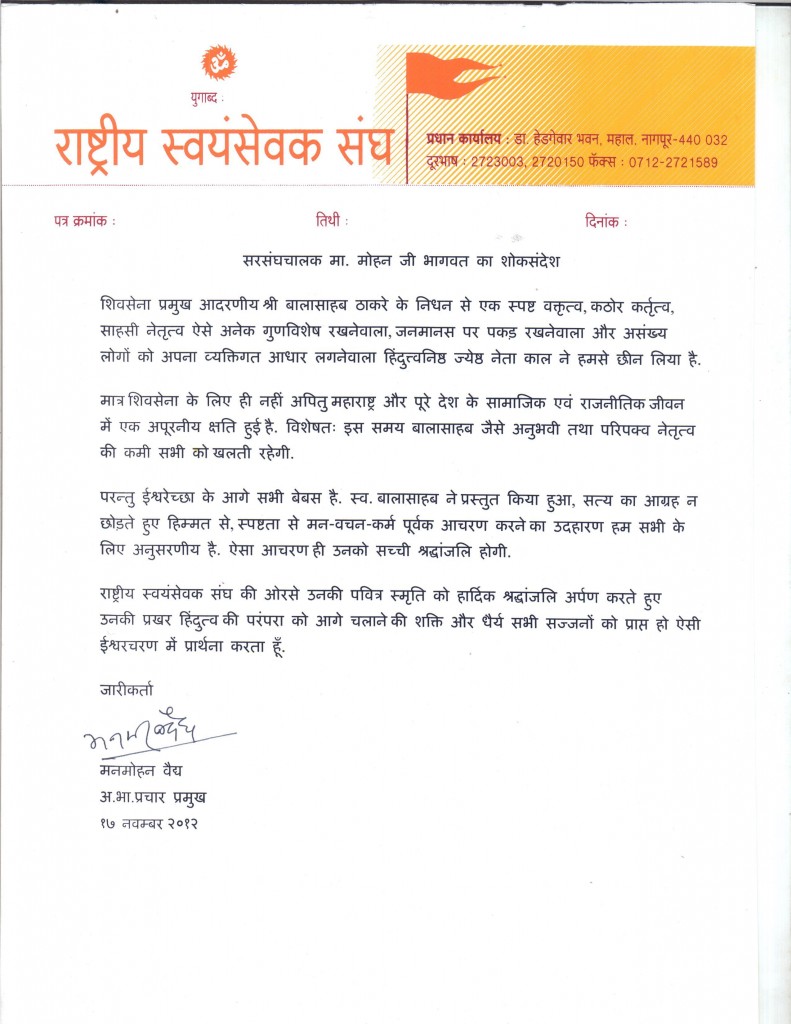