Mysore September 26: “Standing tall to the morals and principles, Sudarshanji was a rare personality to whom RSS will ever remember for his Intellectual contributions to the organisation. His life and message is a guiding force to all Swayamsevaks. He showed the right path for a social worker how to be with people even though there exists a difference in ideology among each other, Sudarshanji is indeed a role model for Sangh Swayamsevaks” said RSS General Secretary Suresh Bhaiyyaji Joshi at Mysore.

Bhaiyyaji further said, “Sudarshanji never compromised with Hindutva Ideology. Growing beyond a portrayed image that RSS is anti-Islam or Anti-Christian, and even being RSS Sarasanghachalak Sudarshanji closely associated many friends/scholars from Islam-Christian community. This shows that Sudarshanji and RSS, always open for all who loves our nation. On September 16, during Sudarshanji’s funeral ceremony around 1500 Muslim friends from different states arrived and expressed their condolences. Sudarshanji always use to say about the Good and Bad interpretations of religious literature both in Islam and Christian religion. However, he was open for all intellectual dialogues among these communities. Sudarshanji’s this attitude shows that a social worker though has any ideological difference with anyone, it has nothing to do for friendly dialogues. ‘Dont hate a person, even if you hate his ideology’, this was Sudarshanji’s message”.

“As Sharirik Pramukh and as Boudhik Pramukh, Sudarshanji guided both Physical and Intellectula training in RSS. Sudarshanji was such a tall scholar, but for all common swayamsevaks he was reachable at ground zero. Even as an octagenerian Sudarshanji was training small kids of 6-8 years of age at RSS Sanghasthan (playground where RSS Shakha held) meanwhile he was attending top level intellectual conferences with Top scholars. Hence Sudarshanji was such a rare personality to set his life with utmost simplicity and discipline. His death resembles the death of a Yogi, as he died early in the moring during Pranayam, even without any suffering, as per the vedic saying ‘Anaayaasena Maranam’ said Bhaiyyaji Joshi.

Earlier, Sudarshanji’s burnt ashes ‘Chitha Bhasma’, were made to flow in Paschima Vahini of river Kaveri at Sriranga Pattanam. RSS Mysore City Seva Pramukh Manjunath performed all religious rites during and before Vaikunt Samaroh ceremony under the guidance of famous priest Sri Bhanuprakash. Bhaiyyaji Joshi felicitated both Manjunath and Bhanuprakash for their timely contribution.

Thu Sep 27 , 2012
Kannur, Kerala Sept 27: One more Popular Front of India (PFI) activist was arrested on Wednesday by the police team investigating the murder of Akhil Bharatiya Vidyarthi Parishad (ABVP) activist Sachin Gopal. The police identified the arrested as Shameer (24), a local functionary of the PFI at Kottali here. He […] 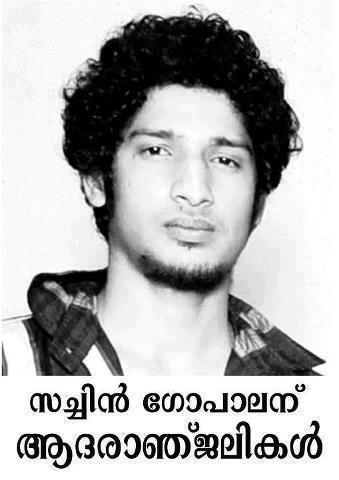