“It is necessary for the proper development of the country that the foundation is strong and a strong foundation can be laid only with the joint efforts of both the nagarvasis (urban dwellers) and the Vanvasis,” said RSS Sarsanghachalak Shri Mohan Bhagwat while inaugurating the sixth national Vanvasi Sports Meet of Akhil Bharatiya Vanvasi Kalyan Ashram at SP College Grounds in Pune on December 29.

Shri Bhagwat appealed to the city dwellers to come forward for the uplift of Vanvasi areas. “There are ample facilities and modern infrastructure in urban areas, but we lack Bharatiyata (Indianness) there, which one can find in abundance in Vanvasi areas, no matter there is acute shortage of modern development or infrastructure there. It is high time that we take the modern civic amenities like roads, electricity, water supply, educational and health services to rural and Vanvasi areas and in return learn Indianness from the Vanvasis,” he said.

He said there is no Vanvasi in Haryana, but the people of the state have formed district and town committees to collect assistance in kind or cash for the Vanvasis. “Vanvasis have always dedicated their might for the nation. It is now our turn to look after their needs,” he said adding that the Vanvasi Kalyan Ashram is rendering yeomen services to ensure all round development in Vanvasis areas.

Shri Bhagwat further said the Vanvasis are strong and powerful, but they are being targeted from many sides. “Some foreign agencies with vested interest are active in Vanvasi areas to disturb their lifestyle, culture and healthy traditions. But the Kalyan Ashram is playing the role of Jambavant who invoked the inherent strength of Hanuman to fly over to Lanka in search of mother Sita. Like Hanuman, the Vanvasis have forgotten their strength. It is the Kalyan Ashram which is reminding them of their strength. This sports Meet will certainly help the organisation to achieve its goal,” Shri Bhagwat added.

Kalyan Ashram president Sri Jagdevram Oraon declared the Sports meet opened. Major (retd) SN Mathur hoisted the flag while Shri Lalit Jain welcomed the guests. Earlier, thousands of Vanvasis from Maharashtra reached the Grounds in a procession. Beautiful cultural programmes and march past by Vanvasis and the participating sportspersons were applauded by one and all.

The Sports meet lasted for four days i.e. from December 29, 2011 to January 1, 2012.  Prominent sports events in which the participants tried their luck were Kabaddi, Kho-Kho, football, race, archery, discuss throw and long jump. Vanvasi boys and girls from all states (except Jammu & Kashmir and Punjab) reached Pune with enthusiasm. The biggest thing which impressed all at the Grounds was the feeling of unity and brotherhood. They might have competed in the courts, but showed full love and affection in the residential rooms or while having meals. When asked some of the participants said it was for the first time that they travelled such a long distance out of their remote villages. They thanked the Kalyan ashram for giving a chance to see the land of the country. A total of 2032 boys and girls participated in different sports activities. It was for the first time that the teams from Delhi and Goa also attended the national sports meet. A total of 267 medals including 107 gold, 108 silver and 52 bronze medals were won by the participants. With 16 gold, 5 silver and 8 bronze North Bengal won the highest 29 medals. After that Chhattisgarh won 25, Maharashtra and Andhra Pradesh (West) 24 each, Jharkhand 22, Arunachal Pradesh 17, Goa 15, Tamil Nadu and Madhya Bharat 14 each, Jashpur and Odisha 11 each, Delhi 9, Andhra Pradesh (East) 8, South Bengal, Uttar Pradesh (East) and Assam 7 each, Karnataka and Tripura 6 each, Kerala 4, Rajasthan and Vidarbha 2 each and Bihar, Manipur and Uttarakhand 1 each.

Prior to the national meet, sports competitions were organised at block, district and state levels during the last one year. A total of 1,25,000 Vanvasi sportspersons participated in those events. The number of participants at state level tournaments was 10,000. In Arunachal Pradesh itself, 100 competitions were held at all levels. Speaking on the occasion Lok Sabha Shri Karia Munda appreciated the efforts and yeomen services of the Vanvasi Kalyan Ashram. Another important event that won the heart of the participants was the matrihast bhojan. More than 2500 people from over 1000 families gathered in the Grounds on December 30, with prepared food to dine with the participants. Mon Jan 9 , 2012
Hindu girl forced to convert in Pakistan Why are you silent on the plight  of Hindus in Pakistan,  Mr Prime Minister? — writes  Prof  Vijay Kumar Malhotra, in Organiser Leader of Opposition in Delhi Assembly Prof Vijay Kumar Malhotra expressed strong  anguish over the increasing incidents of rape of Hindu […] 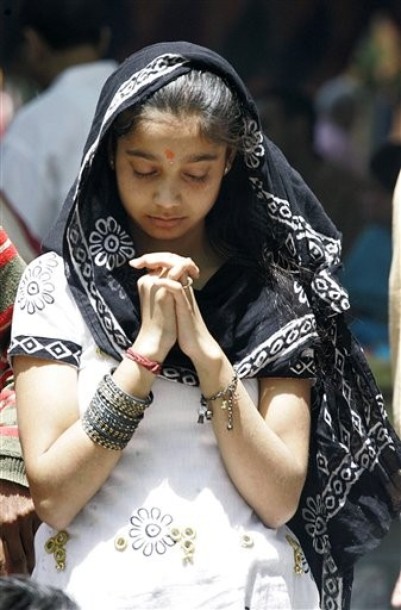