Recently a story appeared in Tehelka; “Hindutva Lab 2.0″ (http://tehelka.com/story_main51.asp?filename=Ne250212coverstory.asp). For those of you, who have not read it; please feel privileged to visit their website and look into it with the dedication of enjoying a thriller. However, you are cautioned against taking the content seriously.

So, why should it not be taken into serious account? The write up reflects their frustration: when a nationalist movement garners quantum support on a systematic basis, frustration is bound to creep up. The article also reflects another aspect: desperate  bid to create sheer sensation with what they write. Use of phrases likescary distortion of an entire society will vouch for both.

When you write about an organization or a group, it is a common practice to talk to people who are members and take into consideration their views. But wondering if Tehelka ever did this! During the journalist’s supposed journey, through Karnataka, spending a week journeying from urbane Bengaluru to northern and coastal Karnataka, did he meet any person from RSS/BJP? If he has, why has the journalist in charge not quoted the views of Parivar People in his article? If he hasn’t, his intention is clear – not conveying any single fact or idea, but sheer propagation of hatred against Sangh.

In any case, what is Tehelka’s source? As a reader, if you are from Karnataka or associated with Karnataka, the source of the article can easily be discerned: Seetaram, the editor of Karavali Ale evening. The daily he heads springs from coastal Karnataka. Read on about Seetaram:

Seetaram is known for amply selling crime in the coastal areas of Karnataka. He has many criminal cases glaring at his face: for defamation, for spreading religious hatred: the list is numerous. He was once arrested for writing derogatory articles against the revered Tarun Sagar, a Jain Muni.

Tehelka’s crime thriller has also quoted an interview of JDS leader Mahendra Kumar, to lend prop to the story. Anyone, with an ounce of intelligence, will understand that some one who has migrated from an organization will stop swearing allegiance to the same. This includes talking against it as well.

The journalist who aims at creating sensation via Tehelka has quoted that people from Karnataka shouted a slogan: Pehle qasaai, phir Isaai (first butchers (Muslims), then Christians). My query to the dear journalist: Since when have Kannadigas resorted to the use of Hindi while raising slogans? The query will come from any other reader as well. It is natural.

Now, if they have used Kannada, why has the dear journalist taken trouble to render a painstaking translation to Hindi and then to English?

Moving on: the journalist has planted a few ‘official figures’ in his ‘crime thriller’: for over 3 years, some church office becomes the victim of an attack, every 10 days. Amazing! But, could the dear journalist be kind enough to also induce into us, some knowledge, about the ‘offices’ that have fallen a prey to the attack? Will he be kind enough to shed light on atleast a fragment of proof, from any official source? Or is the office of Karavali Ale Tehelka’s source of ‘official proof’?

For readers who are interested in reading more about ‘church attacks’, here is a sensational scoop: http://indiawires.com/4434/news/national/church-attack-in-mangalore-repealed-love-and-other-shocking-realities/

Will the dear journalist from Tehelka put forth some proof, with regard to the ‘disturbing question’ he has asked- that too with some statistical figures please? Statistics from the Home Department proves a steep decrease in number of communal incidents in Karnataka.

Now, a look at the factual lies that are being propagated widely:

(A footnote about the newspaper: the news paper weighs upon itself proved instances of trying to stoke communal passions and creating disharmony in the district of Mangalore. Several cases have been filed against the editor and publisher of Karavali Ale.)

The ‘crime thriller’ writer has also stated about larger Parivar backing Pramod Mukhalik of Rama Sene.In his life as a journalist, did he selectively choose to ignore the well known statement of declaration by RSS that the organization has absolutely no relation with Rama Sene. If he has not seen the declaration, does he have any proof for Parivar backing Muthalik?

The dear journalist from Tehelka has mentioned that a case was filed against Masood for holding a press conference he held, condemning ‘Bhatt’s despicable one-liner’. Please note: the case was actually booked for twisting Bhatt’s statement, for spreading hatred. Let him note that the FIR failed against Bhatt even before that, even as the allegations against Bhatt are baseless.

The dear journalist has a list of trivial attacks on minorities with a bold title “Minority Report”. Let us assume that some of them could be real incidents. But incidents of communal hatred are far less, when a comparative study is done with those occurring in Kerala and Rajasthan. The dear journalist can refer official reports issued by none other than the Central Government. The instances referred to by our writer of ‘crime thriller’ includes a ‘list of attacks on minority’ including a newspaper being given the status of a state-level paper!

According to him, Vijaya Karnataka has been accused of promoting the idea of Muslims and Christians as “members of other religions”. Requesting dear journalist to kindly furnish some proof, atleast a scanned copy of this report? And just asking: will he furnish an apology, if he fails to produce a proof report?

Dear journalist, you might get convulsed, but just for your info: the editor of Vijaya Karnataka (owned by the ‘Times’ group) openly says he is against RSS ideology.

Dear Tehelka, if you cannot stick to real facts, we shall give you articles about the developments that have taken place in Karnataka, furnished with actual data and statistics. Would you be kind and graceful in publishing the same? I you are worried about the cost, do put in a word: we could offer aid and assistance, may be a relief fund too.

And before winding up: dear journalist has made a mention of harsher truth: scary distortion of an entire society. But will the dear journalist be kind enough to provide some data on the change in population of the society under distortion according to them?.

Sun Feb 19 , 2012
WASHINGTON: Kamal Bawa, an Indian-born professor of biology at the University of Massachusetts Boston, is the 2012 winner of the Gunnerus Sustainability Award, the world’s first major international award for work on sustainability. Bawa will receive the Gunnerus Gold Medal and the award of 1 million Norwegian Kronor (about $190,000) at a ceremony […] 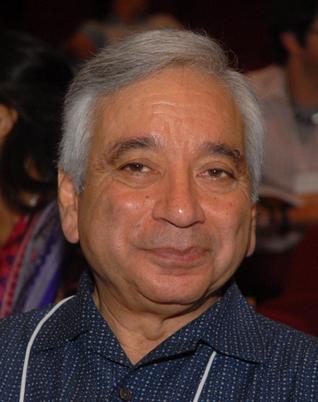