Chennai: An impressive protest public meeting was held to protest against these Interlocutors report which is a conspiracy to sever Jammu-Kashmir from India in Chennai on 6th July 2012.  Around 500 people comprising of men and women from all walks of life attended to show their solidarity for saving Kashmir.  Meeting started with a song of Bharathiyar. Sri Durai Shankar, Chennai City President of RSS presided over the gathering and highlighted the purpose for which the meeting was held.

Sri Veerabaghu, Editor of Vijayabharatham highlighted the concessions extended to Jammu-Kashmir which are not applicable to the rest of the country. Smt Vanathi Srinivasan, State BJP Secretary (Women Wing) elaborately explained the genesis of the problem and held Jawaharlal Nehru swaurely responsible for the whole mis-management of the issue.  She also threw light on Article 370 which is not in accordance with our national interest.
Sri Prakash, Chennai Saha Vibhag Karyavah narrated the inspiring sacrifices made by Swayamsevaks in protecting Kashmir and various services rendered to the Army personnel. He also mentioned how efforts are being made by RSS to bring together nationalist Muslims under the banner of ‘Muslim Rashtriya Manch’ which held an impressive rally in New Delhi in December 2011 in which 10000 Muslims participated. These Muslims demanded removal of Article 370 and to annex ‘Pak Occupied Kashmir’ with India. Sri Nambi Narayanan, State Secretary of Swadeshi Jagran Manch dealt at length the conspiracy and the anti-national attitude of the committee members who submitted the interlocutors report. Some of the recommendations of the Committee namely to give permanent status to Article 370 and coining the word ‘Pak Occupied Kashmir’ as ‘Pak Administered Kashmir’, appointment of Governor to be made by the President only out of the recommendations of three names of the State Government etc. in the report is a view of separatist and it paves the way for separatist tendencies. Sri RBVS Manian, VHP State Vice President highlighted on the emotional and spiritual binding of the people of Bharat with Kashmir.  He quoted various puranas and the role of Adi Sankara to substantiate the emotional binding that exists. Because of this emotional binding lakhs of devotees attend the Amarnath Yatra every year despite threats from terrorists.
Sri Ramagopalan, Founder Hindu Munnani cautioned the public about some Muslim elements that are functioning in Chennai also on similar lines that is existing in Kashmir.
Sri M N Sundar, Akhila Bharatha Grahak Panchayat State Organiser sung a song on Kashmir which was repeated by the gathering with full spirit. 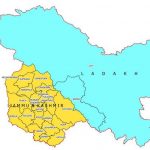 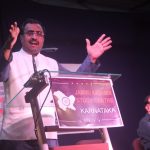 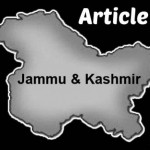