conducted raids at the residences of two retired Army officers and a Vectra executive in Delhi and Noida in connection with the Tatra scam. [TOI p9]

2. Mamata should grow up: Katju: New Delhi: Press Council of India chief Markandey Katju on Wednesday said West Bengal CM Mamata Banerjee should grow up and function in a democratic manner. He was responding to a query on the recent cartoon row that Mamata has been involved in. [TOI p14]

3. Get Your Act Together: RSS to BJP, Message conveyed to BJP brass

during a meeting with RSS leaders: NEW DELHI : A month after the

assembly polls verdict, RSS is understood to have asked BJP to get its act

4. Go for FDs now, deposit rates will be cut soon : Mumbai :If you are a

risk-averse investor, lock your savings in long-term fixed deposits — with

a maturity period of two to three years — as soon as you can. The reason:

lends to banks by 0.50%, experts say the banks may respond by lowering

not only their lending rates, but the deposit rates, too.[HT p1]

be renewed momentum in pushing through the much-delayed Goods and

Services tax (GST) proposal in the coming days. The Parliamentary

Standing Committee on Finance that is currently vetting the Constitutional

(Amendment) Bill is expected to commence discussions on the bill after

the end of the Budget session, chairman of the Empowered Committee

6. First thaw? BJP says it will back pension Bill : New Delhi :Leader of

Janata Party would support the government and facilitate the smooth

passage of the pension bill (Pension Fund Regulatory and Development

7. Mamata to back Mulayam choice for President : Lucknow :SP

Minister Mamata Banerjee in Kolkata recently. After the 45-minute

meeting, both parties decided to go together in the Presidential

:Success or failure of the Congress-JVM negotiation over the candidature

issue for the Rajya Sabha election in Jharkhand, could be the key point of

national spokesman over an alleged CD with objectionable content and

containing conversation allegedly between him and a woman lawyer, the

AICC has continued to be mum on the issue.[The Statesman p5]

Conceding a “problem” between him and Narendra Modi, BJP president

11. RSS tells BJP to involve its cadre directly : New Delhi :The BJP has

directly as they are the link between the party and people. The party was

government is suffering from “policy paralysis and ‘indecision’, which has

caused an inertia in the economy, the BJP on Wednesday suggested that

as contribute to asset creation.[AA p2]

in Ballia, UP, the constituency of the late socialist leader.[IE p1]

past few decades. The Centre has removed the main roadblock to their

:The Maoists who have kept MLA Jhina Hikaka hostage on Wednesday

government said it would take steps to withdraw prosecution against 13

Court on Wednesday upheld the constitutional validity of an election law,

polls and returned two of its candidates as MLAs. [TOI p14]

18. Woman in UK watched lover in Delhi slash himself to death over 10

hours, Cops Broke Into S Delhi Flat, But It Was Too Late: New

11,000km apart over four months back, but few knew about it until now. A

British automobile consultant slashed his throat and wrists in his rented

Skype from Reading in the UK. [TOI p1]

quashed the charges of sedition that former Ahmedabad police

Ahmedabad edition in June 2008. The court quashed all five FIRs, which

accused the resident editor and the correspondent of inciting people

against the police. [TOI p1]

began her day with a long-handled broom on the road. But starting next

Assembly passing a resolution in this regard.[The Hindu p5]

mouthpiece Saamna for naming him in a leaked Comptroller and Auditor-

General report, which talked of corruption in land allotment to

revived in Uttar Pradesh on Wednesday with Chief Minister Akhilesh

Yadav holding an interactive session with people at his 5, Kalidas Marg,

Backfired, Says Poll Verdict Not A Referendum: New Delhi: After the

poor show in the municipal polls, it is stock-taking time for the Congress. A

loss of “contact” with the people may have been a cause for the debacle,

feels chief minister Shiela Dikshit. “It (Congress) needs to get in touch with

inclusion of Khwaja Haleem, who had been expelled from the Samajwadi

Party, in the newly constituted State Haj Committee was “a mistake”. Khan

said he did not know about Haleem’s expulsion from the party.[IE p4]

of further controversy, the Central government plans to leave it to the

national monument or not and hence, chart the fate of the

Wednesday allowed Suresh Kalmadi, who is facing trial in a CWG-related

corruption case, to visit Kazakhstan to attend a meeting of the Asian

the party in the capital.[HT p1]

candidates who contested the MCD elections, 1,783 – or roughly threefourth

– lost their security deposits as they could not secure 16.6 per cent

of the total votes polled.[HT p4]

areas souring against the ruling coalition at the Centre. [TOI p17]

32. BJP cosying up to rebels for magic figure : New Delhi: After a

spectacular win in the municipal elections, BJP is reaching out to its rebels

to become the ruling party in the South Delhi Municipal Corporation. The

Central Bureau of Investigation on Wednesday for not arresting Dr Nupur

a non-bailable warrant against her. The court, however, gave the agency

time till April 30 to execute the warrant and file a report. [TOI p3]

authorities from taking any adverse action against him under pressure

from the US. He requested the court to ask the government to also

withdrawal of troops from Siachen is necessary to improve atmosphere,’

issue needs to be resolved by Pakistan and India.[HT p17 ]

Thu Apr 19 , 2012
Newdelhi April 19: Ashok Singhal, International Patron of Vishwa Hindu Parishad (VHP) has written a letter to Prime Minister of India requesting that Ramsetu  be declared a National Monument but it should not be given to the UNESCO in the name of ‘World Heritage’. GOI is supposed to reply SC today(19/4/12) whether the Ramsetu be […] 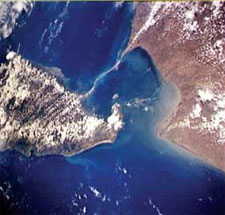