1. China at it again, denies visa to Arunachal officer, India Pulls Out

refused to issue a visa to one member, a colonel-rank IAF officer from

2. Intel: Chinese from Tibet may target Dalai : Mumbai: The Mumbai

police have received intelligence inputs that some terrorists from the

reports of her threatening to withdraw from campaigning were incorrect,

the Kushwaha pot continues to bubble and boil. [TOI p9]

4. Kushwaha wedge: Will Mayawati forgive or forget BJP after polls? :

alliance with the BSP in case of a fractured verdict.[HT p11]

Bhushan was found to have evaded stamp duty of . 1.35 crore in the

purchase of a prime property here and slapped with a fine of over . 27 lakh

on the outstanding amount. [ET p3]

focus on reserved seats to boost its revival efforts in UP, taking a leaf out

7. Sons & daughters tilt in Cong list : Chandigarh: By the fag end of a

Malwa, Majha, and Doaba, had erupted. Seething Congressmen, who

were denied tickets, were swearing revenge and sending ultimatums to

the high command. With thousands clamoring for 114 Congress tickets,

those left out in the cold are expected to create trouble for their own party.

after the revolutionary poet Nazrul Islam could have been avoided.[The

fresh demand made by the opposition to the Election Commission for

removal of officials holding key positions in the Mayawati government.[TOI

chief minister Kalyan Singh, who left BJP to form his own outfit, Friday

: Asserting that it was “not a hasty step”, the BJP on Friday remained firm

on the decision to induct Babu Singh Kushwaha, the tainted ex-minister of

the BSP, into the party fold, indicating that it was a move aimed at playing

leaders Kabil Sibal and Sriprakash Jaiswal continued their attack on the

13. Will decide on alliances after polls, says SP : Moradabad : The SP on

parties, including Congress in case of a hung verdict in the UP Assembly

symbol, the elephant, covered ahead of elections in the state. The

announcement could be made on Saturday.[TOI p1]

Pradesh Assembly elections next month. The list contains 46 names. The

candidates for Lucknow seats have also been cleared.[The Hindu p5]

16. With Maya Math Under Cloud, UP May Go Hung, Brahmins, who

switched allegiance to BSP in ’07, looking for other options: NEW

DELHI : Riding on its promise of ‘sarva hitaya samaj’ (serving all sections

Samajwadi Party, BSP stormed to power in the 2007 assembly polls.[ET

not to contest the assembly polls together. Led by CM Okram Ibobi Singh,

terms, but their “ideological differences” seem to have grown. [TOI p11]

18. In poll-bound In Punjab, it’s all in the family : Chandigarh : From State

MPs and former Chief Ministers, the party’s list for elections to the 117-

member Punjab Assembly is sprinkled generously with members of

over the ruling Bharatiya Janata Party, which witnessed a near-revolt after

the announcement of 48 nominations on Tuesday.[The Hindu p12]

arrested two senior government officials and one trader in connection with

S.P. Ram and Abhay Kumar Vajpayee, were arrested for irregularities.[AA

Kalmadi, an accused in a Games-related graft case, on Friday sought bail

there is discomfort within Team Anna core committee over Arvind

Kejriwal’s signed article that appeared on Friday seeking suggestions from

people on the course the movement should take, there is also a realization

on the need for a new direction. By afternoon, said Team Anna, they had

received “500-600” e-mail suggestions on the address posted by

Delhi : After having secured an opinion from the Law Ministry that there

were no legal hurdles, the government has begun the process to select a

for ransom, attempted murder and rape recording a sharp rise in the

Capital last year comparison with 2010. The Delhi Police have attributed

the increase to a prompt and fair registration of cases.[The Hindu p3]

Kotdwar constituency in the Assembly polls in Uttarakhand. The Congress

on Friday named its nominees for 65 of the 70 constituencies, while the

BJP announced its candidates for all the remaining 22 seats.[IE p8]

bearers and activists of the Uttarakhand Kranti Dal-Democratic, have

resigned from membership. Some of them will contest the Assembly

confident that its political constituency will consolidate if the Bharatiya

Pawar for allegedly violating the code of conduct for the forthcoming

acquisition a major poll plank has suffered a setback with the

Parliamentary Standing Committee delaying its report on the Bill, the

Congress is not discouraged.[Pioneer Daily p5]

30. Sena politics to get younger : MUMBAI: The youngest Thackeray,

Aditya, is on a mission to change the image of the Shiv Sena among the

youth. In the process, the Yuva Sena chief might just ruffle a few feathers

Sena had once taken a tough stand.[AA p1]

representatives in the national Capital, the unauthorised colonies land

essential commodities are not matters serious enough for discussion

during the winter session beginning from January 9. [Pioneer Daily p2]

administration in the state, transferring as many as 27 IPS and five State

Police Service cadre officers. This was the largest ever reshuffle of toplevel

police officers in one go in the state, which goes to Assembly polls in

33. SC clears decks for trial of Talwars in Aarushi murder, ‘Parents Can

Be Named Accused’: New Delhi: What was virtually given up as Delhi’s

most perplexing blind murder case was revived on Friday with the

34. Getting it Right : BARKHA DUTT: If the outcome of political marathons

were determined by the quality of parliamentary interventions, the BJP

would easily sprint across the finish line. Whether it’s Sushma Swaraj -with

her fiery, passionate and powerful oratory or Arun Jaitley -whose cerebral

indisputably packs a punch on the floor of the House. [HT p12]

Mon Jan 9 , 2012
Vanavasi Kalyan Ashram’s sixth national Vanvasi  sports meet in Pune “It is necessary for the proper development of the country that the foundation is strong and a strong foundation can be laid only with the joint efforts of both the nagarvasis (urban dwellers) and the Vanvasis,” said RSS Sarsanghachalak Shri […] 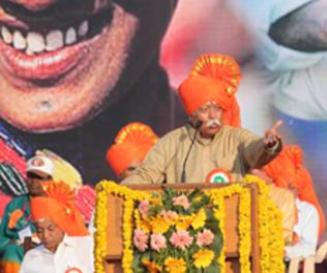